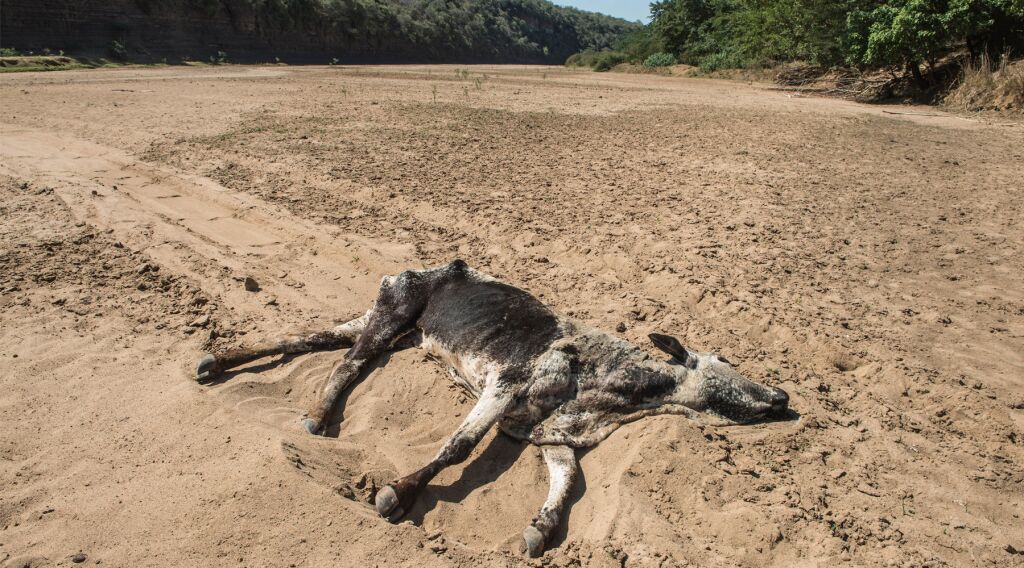 Since late 2015, Southern and Eastern Africa have been suffering the worst drought to hit the region in decades. From Zambia to South Africa, crops are failing, livestock is dying, and food prices are soaring. Some 23 million people are now in need of food support, and experts say the number will exceed 50 million by the year’s end.

“Drought still persists in many areas,” said South Africa’s Department of Agriculture on August 1. “The conditions of veld and livestock remain poor to very poor in communal areas but reasonable in other areas.” The drought “is being exacerbated by the normal dry winter conditions…”

During the last two harvests, the drought has caused massive crop failures, which have been most directly devastating to farmers.

In South Africa, the continent’s breadbasket, experts say 30 to 40 percent of all corn crops will fail this year. South African authorities have declared drought emergency in eight of nine provinces, and 15,000 of 35,000 commercial farmers are already in dire straits. AgriSA‚ an organization that represents South Africa’s commercial farmers, called for the government to give financial help to the struggling agriculture workers: “We are concerned about the fact that more and more big commercial farmers now have their backs to the wall … they do not have the cash flow to support their operations any longer.”

Ordinary citizens throughout the region are also feeling the devastation. Devon Hunter of Greytown, Kwa Zulu Natal told the Trumpet that his household has water only from 4AM until 9AM each day, and that been the case “since last year October.” He said that “from the end of June this year we had no water whatsoever for a little over a month.” Hunter said local officials “had the audacity to blame the people while conveniently ignoring the warnings that they’ve been getting from said people since 2012 to implement water restrictions to avert a disaster.”

The drought has also been destructive in less direct ways, such as in reducing school attendance rates. The Christian Science Monitor said this is because “families are forced to put their children into the workplace to make ends meet,” adding that girls are “particularly at risk,” since “families are forced to contemplate early marriage to reduce their financial burden.”

What controls the planet’s weather has become a political and deeply divisive question. Most on the political left say the increasingly erratic conditions are entirely the result of mankind’s destructive industrial activities. The breakdown, they say, is cosmic payback for man’s environmental sinfulness. They also say it’s the most pressing problem facing humanity, and they throw most all of their weight behind efforts to reduce the carbon emissions of the world’s industrialized nations. No matter what economic consequences may result, they argue, industry (especially American industry) must be curtailed so the planet can survive.

Evidence shows that slash-and-burn techniques, converting forested areas into concrete jungles, pollution from industrial production, and exhaust from planes, trains and automobiles have contributed to weather variation. It is also likely that developing irrigation systems, building lakes and dams, draining aquifers and swamps, and engaging in massive-scale monoculture farming contribute to climatic variation. It is clear that some of the weather calamity we are suffering is mankind reaping the results of environmental mismanagement, poor stewardship, errors and greed.

But scientific observation of physical evidence can only tell part of the story. To understand the rest, we have to turn to a source that most people would never think to consult for such matters: God’s revealed Word, the Holy Bible.

The earliest chapters of the Bible depict God re-creating the continents and oceans, the atmosphere and climate, the intricately woven ecosystems of Earth and the laws that govern it all. Unlike modern meteorologists, who struggle even to predict short-term weather, the Bible accurately forecasts long-term trends and even pinpoints the primary cause of weather disasters.

“[T]he Lord hath his way in the whirlwind and in the storm,” the Prophet Nahum wrote. “He rebuketh the sea, and maketh it dry, and drieth up all the rivers …. [T]he earth is burned at his presence …. But with an overrunning flood he will make an utter end of the place thereof …” (Nahum 1:3-5, 8).

In the above passage, and scores of others, the Bible makes plain that there is a crucial spiritual dimension to weather. Modern analysts generally view themselves as too sophisticated to believe such a fact, but the fact is not dependent on belief. Nature is not only the creation of God’s mind, but God also “has His way” in weather phenomena for a specific purpose: to communicate to mankind.

To understand what the message is, and how it will affect your life, read our free booklet Why ‘Natural’ Disasters?