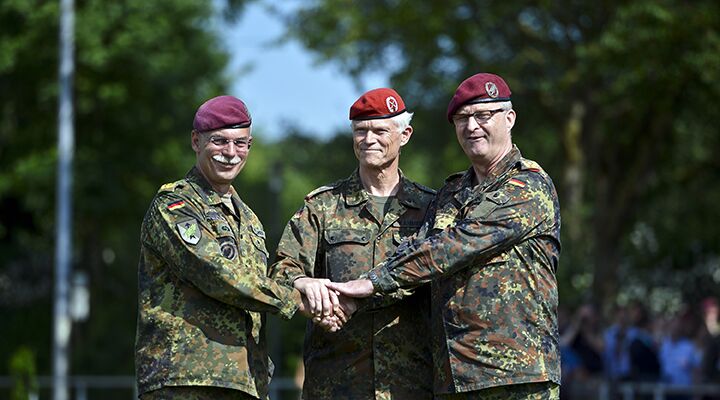 Dutch tanks are now under German command—preparing the way for a German-led multinational tank division and a European army.

Huge portions of the Dutch military are being merged with the German Army, a process that many want to see rolled out across the whole Continent. Two of the Netherland’s three combat brigades have officially begun the process of joining the Bundeswehr.

The 11th Airmobile Brigade came under German command in 2014. Then on March 17, the 43rd Mechanized Brigade officially became part of the German 1st Armored Division. The Dutch Army now has only the 13th Mechanized Brigade, plus special forces, support and headquarters staff under its own command.

This is a revolutionary change, not just for the Netherlands, but for Europe and, in time, the world. It is paving the way for a newly capable German-led military force.

There have been so many token efforts at forming multinational forces that it is easy to gloss over what has just happened. But the Dutch aren’t just doing training maneuvers with Germany. Lt. Gen. Mart de Kruif, commander of the Royal Netherlands Army, called the collaboration “unique in the world, both in the way and the level in which we integrate.”

He’s right. Other multinational forces are on a much smaller scale. The German-Dutch Corps is probably one of the most advanced military collaborations, but it is only 400 strong, including civilian personnel. The 5,000-strong Franco-German brigade has existed since 1987. But every time it has gone to war, it has been divided into its separate, national armies—parts of the brigade were finally deployed together to Mali in 2014.

But this time, the Netherlands is committing its fast-response forces and its only tank unit to Germany.

The two nations are also extending this partnership to the sea. Germany and the Netherlands will share the Dutch Navy’s largest and most expensive ship, the Karel Doorman. The ship is designed to play a few roles, but most importantly, it can transport and land troops. It can land heavy equipment and has space for helicopters. The German sea battalion—about 800 soldiers specializing in naval protection, mine-clearance and boarding ships—will be absorbed into the Dutch Navy. And the two countries are examining having a German air defense unit join a Dutch unit.

These deals help Germany quickly expand the capability of its military, while the Dutch cut costs. Until recently, the German military was designed with one purpose—to prevent Russia from invading central Europe. That doesn’t involve storming many beaches, so Germany didn’t have any real amphibious landing capability. Now that the German Army is considering military missions across the Mediterranean, it needs this kind of capability quickly.

Meanwhile the Karel Doorman was so expensive that the Dutch haven’t been able to use it properly. So the Germans help the Dutch pay for it, and the Germans get an instant and dramatic expansion of their amphibious landing capabilities.

From the Dutch point of view, this kind of money constraint has been the reason behind all their cooperation with Germany. Their military spending has fallen from around 2.5 percent of their economic output to 1.2 percent. Back in 2011, the Dutch Army phased out all its tanks. Since then, they’ve decided they still need tanks, but they don’t want to pay for them. So the Dutch have decided that having their tank battalion commanded by Germany is better than having no tanks at all.

The German Sea Battalion is under Dutch command, so this cooperation goes both ways to a certain extent—though it is clear Germany is the senior partner. Even so, the German troops commanded by the Netherlands will be unable to deploy without the approval of the German parliament. Germany’s constitutional court has ruled that the German military can only be deployed with the permission of the Bundestag. This applies to German units stationed in other forces.

“In all previous collaborations was agreed that troops operations continue to be subject to checks by the national institutions and procedures,” wrote Sachsische Zeitung. “The Sea Battalion of the German Navy could thus be involved, for example, only after approval of the Bundestag on a foreign deployment of the Dutch Navy” (Trumpet translation throughout).

Germany sees this unprecedented cooperation as only the start. It has begun preparations for similar arrangements with Poland. The Czech Republic has asked Germany several times for a similar arrangement to what the Dutch now have—it also wants one of its armored brigades absorbed into the German Army.

German Defense Minister Ursula von der Leyen said she wants to build a European army this way. In February she announced, “We will set up a multinational panzer division next year.”

“This should create a unit with up to 20,000 active soldiers, which should be operational by 2021—which would be the nucleus of a European army,” wrote Die Welt.

In February, von der Leyen called their cooperation a “prime example for the building of a European defense union.” Last month, Lt. Gen. Dieter Warnecke gave a speech where he held up the Dutch-German military partnership as a model for deeper integration among all European armies.

The German press sees this too. “Laboratory for an EU Army” was Die Welt’s title for an article on this subject. It had another article titled “How von der Leyen Is Driving the European Army.”

It wrote, “Von der Leyen and [Dutch Defense Minister Jeanine] Hennis-Plasschaert were playing the role of pioneers on their way to an EU army in Amsterdam.”

Right from the start, Germany made no secret of the fact that a European army is the ultimate goal of this bilateral cooperation. The Trumpet described this thinking back in 2013. Even back then, the plan had been clearly articulated by Germany’s defense establishment. Efforts to create a European army had consistently failed. So Germany was taking a new approach. It would form deep military relationships with just a few countries. Gradually more nations would be added to this cooperation, until the nucleus of a European army was formed.

“If Germany can prove that integration can work with the Netherlands and Poland—and they can save a lot of money doing so—other nations will want in. Once Berlin brings a few more countries on line, this project will gain critical mass,” we wrote. “The result would be an EU army, or a very closely coordinated group of armies, centered on Germany.”

With Germany planning a multinational panzer division, this process is well under way.

Germany’s economic dominance means that just about any kind of European army will be dominated by Germany. Writing on France’s calls for Germany and France to work together on defense, George Friedman wrote:

Collaborating on defense budgets, with each nation contributing based on economic size, would mean that Germany would be both the leading economic and military power in Europe. Within the EU, Germany is first among equals. Creating a substantial military force would cement that.

The rise of a Europe capable of fielding a powerful military force, independent from the United States, would be one of the biggest geopolitical events of the 21st century so far, revolutionizing the balance of power around the world. Europe has already shown that it’s willing to use its considerable economic power against U.S. interests—siding with China against the U.S., for example, in the case of the Asian Infrastructure and Investment Bank. How much more independently would it behave with a powerful military?

Europe’s history warns that the world should be wary of the rise of this new military power. For more on this, read our free book The Holy Roman Empire in Prophecy.