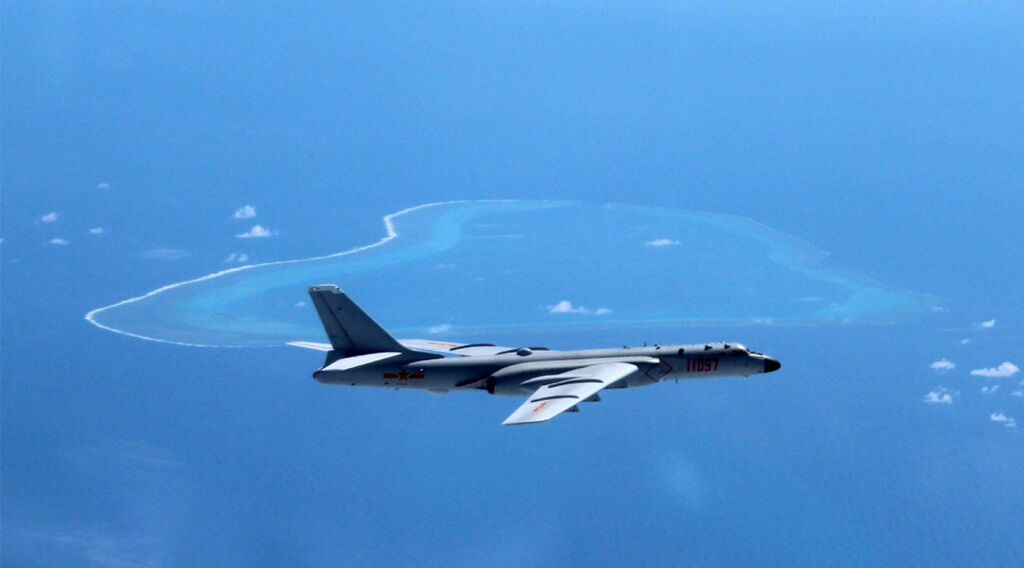 Beijing’s aggression is leading the world down the path to war.

With tension already at historic levels between China and the United States, Beijing ratcheted it up even further on July 15 by flying a nuclear-capable bomber over the contested Scarborough Shoal.

This latest bout of saber-rattling came just three days after The Hague dismissed China’s claims of sovereignty over much of the South China Sea. China has rejected the ruling and sought to reaffirm Beijing’s policy in the contested region.

The Scarborough Shoal lies within the Philippine exclusive economic zone. But according to China, the shoal sits within the bounds of the infamous “nine-dash line”—a vast swath of self-proclaimed Chinese territory.

Chinese media stated that the bomber was shadowed by support aircraft. One bomber poses little threat to the Philippines or its U.S.-supported allies in the region, but when the bomber is part of a broader escort in both the air and sea, the threat portrayed is far louder.

China’s motives for the flyover are more than to simply defy The Hague’s ruling; China is demonstrating to the U.S. and its allies that Beijing is fully capable of not only defending the contested islands, but also attacking potential threats. Consider the fact that China doesn’t need a nuclear-capable aircraft to defend the Scarborough Shoal. It serves little purpose from a practical standpoint. But displaying it acts as a deterrent. The Philippines undoubtedly takes notice when a long-range nuclear-capable bomber enters the fray. And with good reason.

When the U.S. flew B-52 bombers over the region in December, it caused a slight stir in China. But the show of force was relatively mundane compared to the displays of the Great White Fleet and the Roosevelt era of American military reach and prowess. Today, a hamstrung military and failed Asian pivot relegate the B-52 flight to little more than a futile gesture.

China on the other hand is displaying more power than ever. Beijing has aggressively pursued a belligerent policy in the South China Sea. It harasses fishermen. It develops islands. It establishes militarized outposts. China is backing words and policies with action. The recent bomber flyover should concern the U.S. and its allies because China is proving itself willing to use force to maintain control of the region.

China is capable not only of operating bombers so far from home but also of supporting them with fighters and seaborne support vessels. The newly built islands provide the ideal stepping-stone for aggressive military maneuvers so far from Chinese territory.

Now that The Hague has ruled against it, China has few options in the South China Sea that don’t involve a strong military presence. If it doesn’t portray itself strongly, Beijing risks losing its investment in this trade zone that sees $5.3 trillion worth of trade pass through each year. Whoever controls this zone controls a third of the world’s maritime trade!

The arrival of nuclear-capable bombers shows the direction of geopolitics in the South China Sea.

In the July issue of the Trumpet magazine, editor in chief Gerald Flurry wrote an article on China’s efforts in the South China Sea. The title says it all: “China Is Steering the World Toward War.” The article examines China’s motives for controlling the South China Sea, and the stark similarities that exist between the region today and the region under the control of Imperial Japan. Mr. Flurry wrote:

Once World War ii started, the Japanese empire claimed the entire South China Sea and built military bases in some of the very same archipelagos China is militarizing today. … Two months after the bombing of Pearl Harbor, the Japanese were able to conquer Singapore.This marked the start of a period of near-apocalyptic violence in Southeast Asia.

Think it couldn’t happen again? Don’t be so sure! Read Mr. Flurry’s article. Tension in the region is already palpable. Now nuclear bombers are patrolling the skies on the Philippines’ doorstep!

China is defying The Hague with military patrols and aggressive foreign policy. Keep watching as such policies steer the world toward cataclysmic war.