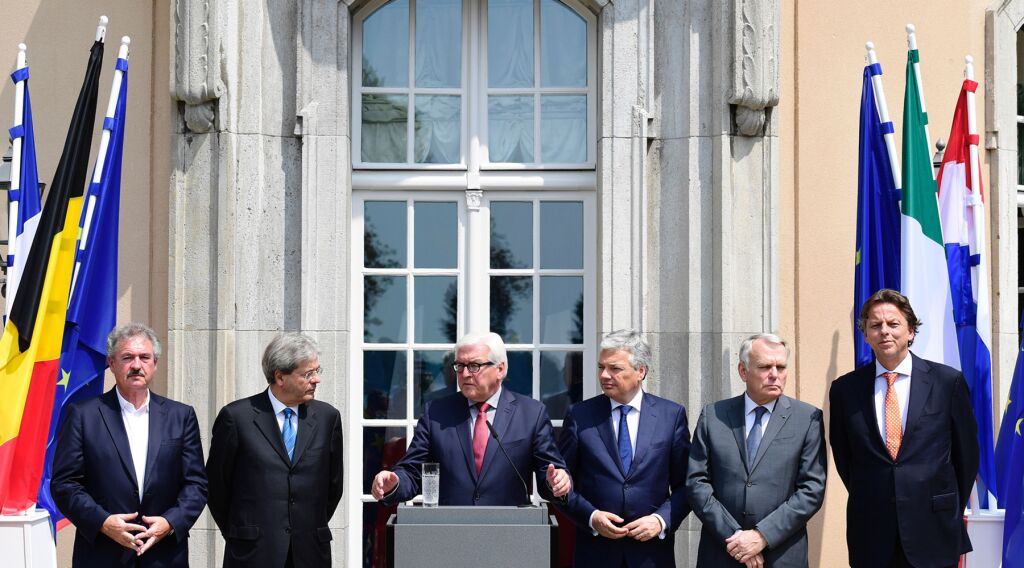 In the wake of Brexit, leaders from the across the Continent are calling for the EU to overhaul its military.

Officials across Europe are pushing for the Continent to develop an army and send it oversees. Though Europe is greatly divided, this is one of few areas on which all sides agree.

Defense reform is “a matter of urgency” European Union officials believe. The EU needs its own armed forces, navy and intelligence service. Poland believes Europe should have “a European army” and “a strong European president with far-reaching authority.”

“The EU wants its own empire as former Commission President José Manuel Barroso made clear when he was in charge,” said UK Independence Party spokesman Mike Hookem. While this comment may seem farfetched, it’s clear the EU wants to rapidly step up its military involvement in North Africa and the Middle East.

The day after the Brexit referendum, French Foreign Minister Jean-Marc Ayrault and German counterpart Frank-Walter Steinmeier published a recommendation on how to respond to Brexit. “We will … move further towards political union in Europe and invite the other Europeans to join us in this endeavor,” they wrote, urging the EU to travel further down the path to becoming a superstate.

Their report outlined three key areas the EU should focus on for creating this unity: security, immigration and the economy. The section on military and security was by far the biggest.

The two nations “recommit to a shared vision of Europe as a security union,” the report said.

“Germany and France propose a European Security Compact which encompasses all aspects of security and defense dealt with at the European level and thus delivers on the EU’s promise to strengthen security for its citizens,” they continued.

This, in black and white, is a call from France and Germany for an EU military force and an EU navy, as well as perhaps a European-style fbi.

On July 1, EU High Representative for Foreign Affairs and Security Policy Federica Mogherini published her vision for the future of EU security cooperation in a report called “A Global Strategy for the European Union’s Foreign and Security Policy.” This too made a strong call for a superstate. Europe needs to be “a true union” she wrote. “We need a strong Europe. … This is what our citizens deserve, this is what the wider world expects.”

“The EU’s credibility hinges on our unity,” she wrote.

Europe needs to do more, spend more and be more unified when it comes to the military, Mogherini argued. “Investment in security and defense is a matter of urgency,” she wrote, noting that “defense cooperation must become the norm.”

This desire for unity goes far beyond those in Brussels’ cloistered halls. In the wake of Brexit, opposition is growing within national governments, especially in Germany and Eastern Europe, to Brussels’ way of doing things. But these nations also want defense cooperation.

Spiegel Online reported on the conflict in an article titled “Brexit Aftershocks: An Inside Look at the EU’s Raging Power Struggle.”

The way Spiegel saw it, Europe is divided between insiders in Brussels, who want “more Europe,” and nation states who want “less Europe.” However, it noted (emphasis added throughout):

Jaroslaw Kaczynski, head of Poland’s national-conservative Law and Justice party, which currently holds power in the country, doesn’t want “less Europe” in all areas. When it comes to foreign and security policy, he would even like to see the EU play a more robust role. Kaczynski is in favor of the establishment of a European army and would like to see a strong European president with far-reaching authority. It is a demand that many governments in Eastern and Central Europe agree with.

It’s hard to imagine anything “more Europe” than a strong president and a European army. These nations are not opposed to “more Europe,” but rather “more Brussels.”

With Britain gone, there’s a lot of uncertainty in Europe. But a common military is one of the only things that all the remaining sides can agree with.

Another common theme of both reports was a call for Europe to get more involved in its neighborhood. “We want also to increase our dialogue and cooperation with third countries in North Africa, the Sahel strip, the Lake Chad Basin, West Africa, the horn of Africa and the Middle East, as well as regional and subregional organizations (African Union, G-5),” wrote Steinmeier and Ayrault.

“It is in the interests of our citizens to invest in the resilience of states and societies to the east, stretching into Central Asia, and south, down to Central Africa,” wrote Mogherini.

Her report was full of references to “peace building.” The EU knows full well that making peace usually involves military force. “The EU will engage more systematically on the security dimension of these conflicts,” she wrote.

“The EU must be able to respond rapidly, responsibly and decisively to crises, especially to help fight terrorism,” she continued—all overt calls for the EU to be able to field military forces abroad.

The paper also talks about “preemptive peace building,” noting, “It has long been known that preventing conflicts is more efficient and effective than engaging with crises after they break out.”

Underscoring the military nature of “peace building,” the European Commission put forward a proposal on July 5 to use funds earmarked for “peace building” to buy weapons for foreign armies. Currently, peace-building funds are used to provide things like maternity health care in Syria. The new rules would allow it to be spent on military training and weapons. EU Observer noted that “this is the first time” the EU “will pump money directly into a foreign military structure.”

It’s easy to dismiss report’s like Mogherini’s as just talk. After all the EU has been talking about a military for decades. But the EU is already moving forward on some of its recommendations.

More subtly, these papers also show EU leaders placing a high priority on being able to act without America. “France and Germany will promote the EU as an independent and global actor,” wrote Steinmeier and Ayrault.

European leaders view independence as one of the top priorities in defense and security. On April 6, the day before an important meeting between French and German officials, an interview with French President François Hollande was published by Bild, Germany’s most widely read newspaper.

“Our two countries must agree to a budgetary effort on defense,” he said. “And to act outside Europe. Let’s not rely on another power, even a friendly one, to do away with terrorism.” After the November 2015 Paris attacks, Hollande invoked the EU’s self-defense clause—not nato’s. This was a remarkable shift, as Trumpet editor in chief Gerald Flurry explained at the time:

By invoking the EU’s collective defense clause rather than turning to nato, French President François Hollande was declaring that Europe is more than just a junior partner in America’s defense arrangement. Europe is its own power. It has its own foreign relations, its own interests and its own goals.

The EU clearly does not trust America. This is a major reason Europe is talking so much about defense right now. Its neighborhood is a mess. A brutal civil war in Syria is sending refugees streaming across its borders. Libya is threatening to follow down the same path. Many in Europe blame America for the current tension with Russia. In European eyes, America has made a complete mess of the world. It’s time for the EU to step up and fix it—or at least take care of itself.

The Trumpet and the Plain Truth have forecast for decades that European nations would combine forces. However, persuading all these separate nations to work together is a hard sale. Brexit, the migration crisis and radical terrorism, however, may be putting the EU under the pressure necessary to make this happen. For more on the EU’s recent steps toward military unity, read our article “Is Europe Finally Ready for an Army?”