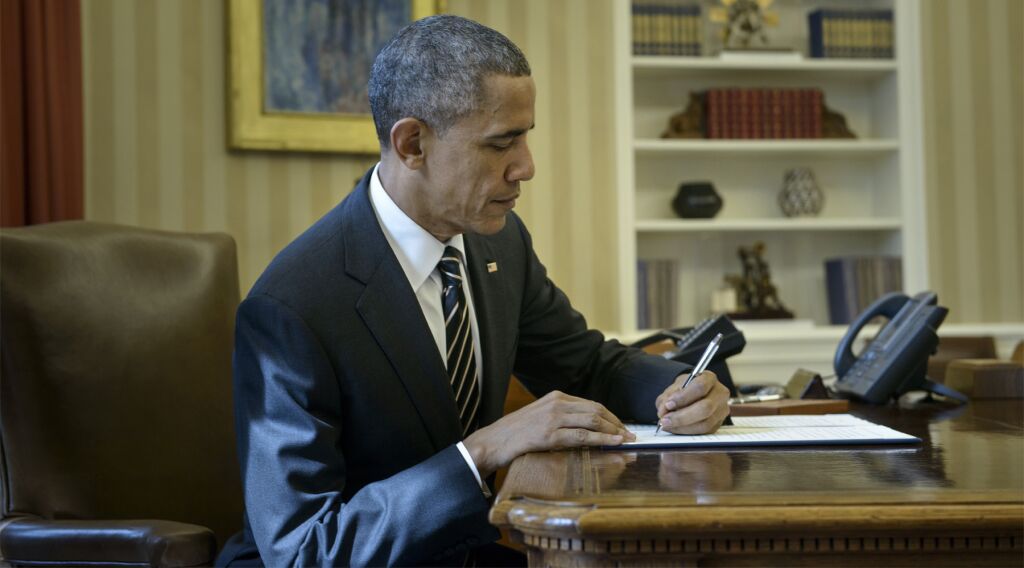 America is moving into a dangerous era where the only constraints on presidential power are no longer constitutional—merely political.

While the world watched the historic Brexit referendum unfold, the United States Supreme Court ruled on one of the most import cases in its 227-year history. In a 4-4 split decision on June 23, the eight sitting Supreme Court justices failed to resolve the nation-changing constitutional question underlying the case United States v. Texas. While most media outlets focused on the case’s impact on U.S. immigration policy, the long-term consequences of the court’s ultimate decision are far more serious than immigration reform.

The broader constitutional question underlying this historic case is: Does the U.S. president have the authority to rule by executive decree?

Many political pundits say that political gridlock has made Congress dysfunctional; therefore, the country needs a strong chief executive who can go it alone when necessary. But who decides when such unilateral action is necessary? And who has the power to stop such unilateral action if it is in violation of the people’s rights? If you trust President Barack Obama to make such decisions, would you trust Republican presidential candidate Donald Trump with that power if he were elected? If you trust the wisdom and discretion of Donald Trump, would you trust the president after him?

The 4-4 split court decision upholds the separation of powers enshrined in the text of the U.S. Constitution—for the time being. Due to the death of Supreme Court Justice Antonin Scalia, however, there was no tie-breaking vote to lay this issue permanently to rest. In all likelihood, this case will be revisited soon after the Senate confirms a ninth Supreme Court justice. This ninth justice may well inherit the power to decide what form of government America will have in the immediate future: a constitutional republic or an elected monarchy.

Congress had refused to pass an immigration bill that the president wanted, so Mr. Obama instructed the Department of Homeland Security to offer temporary legal status to an estimated 4.7 million illegal immigrants. This order unilaterally enacted immigration reform that congressional lawmakers refused to enact themselves.

Previously, the president admitted on 22 different occasions that he didn’t have the constitutional authority to unilaterally enact executive immigration reform without congressional approval.

“I’m not a king. My job as the head of the executive branch ultimately is to carry out the law,” Obama admitted in a January 2013 interview with Telemundo. “When it comes to enforcement of our immigration laws, we’ve got some discretion. We can prioritize what we do. But we can’t simply ignore the law.”

After the president changed his position and decided to ignore the law, he was quite honest about what he did. When hecklers interrupted one of his speeches by demanding an immediate end to all deportations, the president said, “What you’re not paying attention to is the fact that I just took an action to change the law” (emphasis added throughout).

Apologists for the Obama administration claim this executive action was no different from previous executive actions enacted by former U.S. Presidents Ronald Reagan and George H. W. Bush. The critical difference between these cases, however, is that both Reagan and Bush were instructing the executive branch to enforce somewhat ambiguous aspects of immigration laws alreadypassed by Congress. They weren’t taking “an action to change the law.”

President Obama’s action was truly historic because Congress had already declined to pass an immigration reform bill. So, as the president himself admitted, his executive order truly did take “an action to change the law.” Instead of taking “care that the laws be faithfully executed,” President Obama decided that he wasn’t going to enforce the law until Congress passed a bill that was more to his liking.

Under the U.S. Constitution, Congress writes laws, the courts interpret laws, and the president enforces those laws. Executive action is not illegal as long as it falls within the parameters of enforcing laws already passed by the legislature. Creating new law via executive fiat, however, is the very definition of an imperial presidency.

To understand what is at stake in United States v. Texas, you have to understand why America’s founders gave legislative authority to Congress. America’s system of checks and balances was meant as a guard against tyranny.

James ii was king of England, Ireland and Scotland until he was deposed in the Glorious Revolution of 1688. During this revolution, the Parliament of England drafted a charter that stands alongside the Magna Carta as a twin pillar of Britain’s constitutional monarchy. This charter limited the power of the monarch and established the right of the people to represent themselves in Parliament. It reasserted “ancient rights and liberties,” and declared that “the execution of laws by regal authority without consent of Parliament is illegal.”

The English Bill of Rights was the final culmination of almost a century of civil war between Parliamentarians and Royalists. Well over 30,000 English Parliamentarians sacrificed their lives to defend the rights of the people against a king who wished to rule via executive decree. The British colonists in America fought for this same right in 1775, when King George iii and the Tory Parliament levied taxes without giving the colonists representation. Almost 7,000 American colonists died to secure the right to govern themselves via their own elected representatives.

To further protect the American people from the political whims on an autocratic leader, the framers of the U.S. Constitution divided the federal government into three branches, with each branch checking the power and authority of the other two branches. The founders knew that even a popularly elected president could trample the rights of the American people if his authority went unchecked.

This is why James Madison, the primary drafter of the U.S. Constitution, wrote in the Federalist Papers that the “accumulation of all powers, legislative, executive and judiciary, in the same hands, whether of one, a few or many, and whether hereditary, self-appointed or elective, may justly be pronounced the very definition of tyranny.”

Even if you support President Obama’s immigration proposals, do you really want to live in a nation where a chief executive can ignore laws he doesn’t like? Every state in the union is represented in the national legislature, but there are vast areas of the country where not a single county voted for the current president. Should the people of these regions be subjected to rules and regulations unilaterally enacted by a president they never voted for? If so, American politics are going to swing back and forth like a pendulum as Republican and Democratic presidents take turns punishing their enemies and reigning over the land. If the separation of powers has eroded to a point where a president can rule by executive decree, America is nothing more than an authoritarian monarchy where 51 percent of the people elect their king every four years!

Perhaps the most important function of the Supreme Court is to prevent the executive and/or legislative branches of government from exceeding their constitutional authority and hijacking the government.

The death of Antonin Scalia leaves an open seat on the Supreme Court. The battle over who will fill this ninth seat isn’t simply a battle between Democrats and Republicans, it’s a battle over ideologies: whether there will be a justice who believes in a living, changing Constitution or a justice who believes in the original ideals underpinning the Magna Carta, the Bill of Rights, the Declaration of Independence and the Constitution.

In frank terms, Americans get the leaders they deserve—including Supreme Court justices.

Fifty-two percent of the population believes President Obama was right to take executive action to address the immigration issue, according to a 2015 prri opinion survey. Sixty-seven percent of Americans surveyed in a 2016 cnn/orc poll said they supported the president’s past executive actions on gun control.

It doesn’t matter what the Constitution says about the separation of powers if the people want a chief executive who can make such decisions on their behalf. The U.S. Constitution was designed to prevent a singular tyrant or a small minority from hijacking the government. If the public-at-large stops loving the principles of freedom enshrined in the Constitution, however, a piece of parchment has no power to stop them from allowing a takeover of all three branches of government.

Former U.S. President John Adams explained this point in a letter to officers of the First Brigade of the Third Division of the Militia of Massachusetts in 1798: “[W]e have no government armed with power capable of contending with human passions unbridled by morality and religion. Avarice, ambition, revenge or gallantry would break the strongest cords of our Constitution as a whale goes through a net.”

President Obama often touts himself as a constitutional law professor since he taught a course on racism and the law at the University of Chicago. He knows he doesn’t have a legal right to ignore the law or unilaterally enact immigration reform—he has admitted so on 22 occasions. Yet he also knows that he has four allies on the Supreme Court, and that Congress doesn’t have enough representatives willing to impeach a judge.

The Court is being wielded as a political instrument instead of remaining the guardian of the Constitution.

The original complaint filed against the Obama administration by Texas and 25 other U.S. states summarized the heart of the issue: “[T]his lawsuit is not about immigration. It is about the rule of law, presidential power and the structural limits of the U.S. Constitution.”

If a judicial precedent is set allowing America’s chief executive to ignore the law, how will future leaders of the United States choose to use this newfound power? Could American citizens soon see a President Hillary Clinton unilaterally enact strict gun-control measures? Or perhaps a President Donald Trump cracking down on the free press by unilaterally opening up our libel laws so he can sue newspapers that criticize him?

America’s founders authored a document to protect Americans from the extremes of human reason. To a great extent, the Constitution was based on a strong, realistic understanding of human nature. Tyrants, unjust judges, biased leaders and even the American people themselves were restrained from unlawful actions by the principles of this noble document.

“The Constitution is the foundation of our republic,” writes Trumpet editor in chief Gerald Flurry in No Freedom Without Law. “And the Ten Commandments were, in many ways, the foundation of the Constitution. Our forefathers believed that if we didn’t keep God’s Ten Commandments, our republic would collapse! We can’t afford to take the words of our founders lightly, if we want to see our nation stand. It was much harder for our Founding Fathers to spill streams of blood winning our freedom, and to create and establish our constitutional law, than it is for us just to maintain it!”

What will America look like when the Constitution no longer restrains the chief executive from making unilateral decisions? Americans have grown complacent about the steady erosion of rights their ancestors were willing to die for. Few people seem to realize the dangers of this trend toward lawlessness. As long as the president is making decisions they agree with, they don’t worry about what precedents are being set for the future. They don’t worry about issues of legality. Such lawlessness always comes at a high cost!

The rule of law is a principle that law should govern the nation, as opposed to the arbitrary decisions of individual government officials. In 1780, former U.S. President John Adams enshrined this principle in the Massachusetts Constitution by seeking to establish “a government of laws and not of men.” America’s founders strove to uphold this concept in the U.S. Constitution. Only after people realize that there is no freedom without the rule of law will God be able to teach them the way to true peace, joy and prosperity.