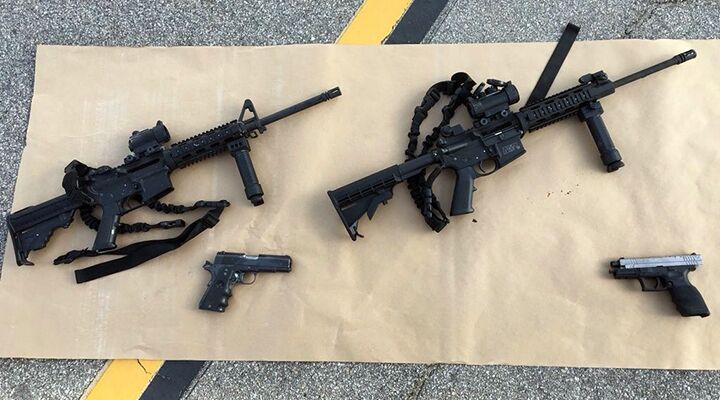 The reason mass shootings have increased threefold since 2011 is because the moral fiber of America is breaking down.

The United States Senate voted last Monday on two competing proposals to prevent suspected terrorists from buying guns. Although these two proposals differed substantially, each was based on the premise of using the federal government’s terror watch list as a screening device to determine which American citizens have a right to gun ownership.

Senators couldn’t drum up the bipartisan support necessary to pass either proposal, but a new cnn/orc survey shows that a majority of Americans back gun-ownership restrictions for those on a watch list.

While this may sound like a common sense solution to many, the American Civil Liberties Union has expressed concern that the Federal Bureau of Investigation could use such a watch list for racial or religious profiling. At the end of the day, the 1 million people currently in the government’s Terrorist Screening Database are suspected terrorists because the fbi says they are suspected terrorists.

Conservative journalist and frequent guest on Fox News Stephen F. Hayes was recently put on a terror watch list after he took a vacation with his wife to the Republic of Turkey. In 2012, Mississippi resident Wade Hicks found himself on the federal no-fly list due to a “clerical error”—although, there are those who think that Wade’s political views were the real reason he lost his right to get on an airplane. You see, Wade was a member of the Mississippi Preparedness Project, a nonviolent organization that advocates storing food for an economic emergency.

Currently, an American citizen can only have his constitutional right to gun ownership revoked by the federal government if he is convicted of a felony by a jury of his peers.

Granting a government agency from the executive branch the power to revoke this right on suspicions of what a person might do in the future isn’t just a violation of the U.S. Constitution’s Second Amendment regarding firearm ownership, it’s a violation of the Fifth Amendment provision that American citizens cannot be “deprived of life, liberty or property without due process of law.”

Why does this matter? Even if you trust the fbi under the Obama administration to make wise decisions regarding who is and isn’t a suspected terrorist, just imagine what a future president with no respect for civil liberties could do if secret lists suddenly became the basis for depriving people of liberty!

It’s become quite common to hear pundits from the left of the political spectrum speak of the U.S. Constitution as an impractical, antiquated document unworthy of the 21st century.

David Harsanyi, a senior editor at the Federalist, recently wrote about a conversation he had with a progressive writer from a well-known liberal media outlet. During this conversation, Harsanyi was told that the Second Amendment was a “violent relic” of a past era and that the “Constitution’s penchant for diffusing direct democracy an affront to equality.”

By this logic, it seems the cause of mass murder in America has nothing to do with moral breakdown or the proliferation of killers. Instead, the root cause of murder is an antiquated and violent Constitution that gives Americans a right to gun ownership unless revoked by due process of law.

Gun control is one of the hottest issues in American politics today. One of President Barack Obama’s hallmark responses to gun violence in America is that it’s time to pass “common sense” gun laws.

The president continually harps on the idea that the U.S. government needs the power to prevent suspected terrorists on a no-fly list from buying guns.

“This massacre is therefore a further reminder of how easy it is for someone to get their hands on a weapon that lets them shoot people in a school, or in a house of worship, or a movie theatre, or in a nightclub,” he said. “And we have to decide if that’s the kind of country we want to be.”

When the president later visited Orlando, he said, “Those who were killed and injured here were gunned down by a single killer with a powerful assault weapon. The motives of this killer may have been different than the mass shooters in Aurora or Newtown, but the instruments of death were so similar. … I hope the House does the right thing and helps end the plague of violence that these weapons of war inflict on so many young lives. … And if we don’t act, we will keep seeing more massacres like this—because we’ll be choosing to allow them to happen. We will have said we don’t care enough to do something about it.”

Is that true? Will massacres like the one in Orlando stop if the House of Representatives passes tougher gun-control legislation?

Murder is against the law. If the argument is to ban the instruments used by the terrorists, what is the solution to stopping an attack like the Boston Marathon bombing? The Tsarnaev brothers detonated a pressure cooker strapped with metallic items to wound a massive number of people. In this case, do we ban pressure cookers?

Gun-control advocates promote their agenda by playing on emotions and demonizing anyone who opposes their legislation by making it sound like they’re cooperating with terrorists. Yet the problem with this approach is simple: It erroneously emphasizes that laws are bad and the Constitution is bad, but not that the people breaking the law are bad.

If the Obama administration got its way on gun control issues, would it stop mass shootings? Or would such proposals only disarm the innocent, while allowing bad people to purchase weapons illegally?

Mateen was actually put on a terror watch list in July 2014 when his name surfaced in connection with an investigation into Moner Mohammed Abusalha, who went to Syria and killed himself in a suicide bombing. Yet Mateen’s name was purged from this list when the fbi determined he wasn’t a threat. Maybe the fbi was too busy watching Fox News associates vacationing with their wives to have time to keep track of someone who openly praised the Islamic State to his coworkers?

Yet even if the government had told Mateen that he couldn’t buy a gun, that wouldn’t have made him give up his murderous ambition to kill Americans. The same is true for all the other murderers. Radical Islam motivated Mateen. Adam Lanza, the Sandy Hook shooter, came from a broken home, played violent video games, and was diagnosed with a mental illness. Killers have many different motives and many different means of accomplishing their murderous ambitions.

The government would have to micromanage everyone’s lives, every second of the day, to try and stop such people from murdering others.

The core of the matter is that people are asking the wrong question. If you listen to President Obama’s speeches, he makes it sound like America’s gun laws, as well as politicians who refuse to pass “common sense” gun laws, are responsible for pulling the trigger on those who have been killed.

What every American should be asking is not, What did Omar Mateen, or any mass shooter for that matter, use to kill people? The question asked should be, Why do American citizens want to kill other Americans?

The main reason the Second Amendment was ratified by the 13 original colonies was to protect people from government tyranny and to preserve freedom. Yet America’s founders also knew that no society could be free simply because the people owned guns. Freedom couldn’t be preserved unless the American people held fast to the principles of morality!

Former American president and founding father John Adams wrote, “Our Constitution was made only for a moral and religious people. It is wholly inadequate to the government of any other.”

Four years before the Second Amendment was ratified, Benjamin Franklin elaborated on this point. He wrote to Messrs. Abbes Chalut and Arnaud that that “only a virtuous people are capable of freedom.”

What happens when a people are no longer virtuous? When morality and the serious sense of responsibility that comes with owning a gun begin to disappear?

Franklin continued, “As nations become corrupt and vicious, they have more need of masters.”

When the people are out of control, when the sense of personal responsibility and morality degenerate—when people become bad—freedom diminishes and tyrants rise. When a society becomes full of killers, it becomes necessary for the government to step in and “save” people from themselves.

This is how freedom dies!

Micromanaging gun ownership does not make America a safer nation. What makes America safe is strong family values that cultivate a culture where people don’t kill each other.

According to one Harvard Research study, the rate of mass shootings in America has tripled since 2011.

Past generations didn’t experience the kind of mass shootings that America suffers today. This isn’t because America had more efficient gun control in the past; guns were actually easier to obtain in past generations. The reason mass shootings have increased threefold since 2011 is because the moral fiber of America is breaking down!

French political thinker and historian Alexis de Tocqueville wrote, “America is great because she is good. If America ceases to be good, America will cease to be great.”

The federal government can restrict gun ownership, but it cannot cure the sickness that motivates people to murder. Until that is stopped, whatever the cause—radical Islam, violent video games, mental illness, broken homes, etc.—America will not see an end to the violence.

When the ancient nation of Israel was rebelling against God, like America is today, the Prophet Isaiah wrote that “the whole head is sick” (Isaiah 1:5). One result of this sickness, as the Prophet Ezekiel later wrote, is that our cities will be filled with “violence” (Ezekiel 7:23).

But God does not send this warning without a solution! Bible prophecy says that soon we will live in a world that is totally gun free! However, this won’t come until Jesus Christ intervenes to abolish man’s system of laws and establish God’s law throughout the entire world.

“The problem basically is theological and involves a spiritual recrudescence and improvement of human character that will synchronize with our almost matchless advances in science, art, literature and all the material and cultural developments of the past 2,000 years,” Gen. Douglas MacArthur said. “It must be of the spirit if we are to save the flesh.”

The Prophet Micah illustrates this wonderful world under God’s rule in the fourth chapter of his biblical book: “And many nations shall come, and say, Come and let us go up to the mountain of the Lord, and to the house of the God of Jacob; and he will teach us of his ways, and we will walk in his paths: for the law shall go forth of Zion, and the word of the Lord from Jerusalem. And he shall judge among many people, and rebuke nations afar off: and they shall beat their swords into plowshares, and their spears into pruninghooks: nation shall not lift up a sword against a nation, neither shall they learn war any more” (verses 2-3).