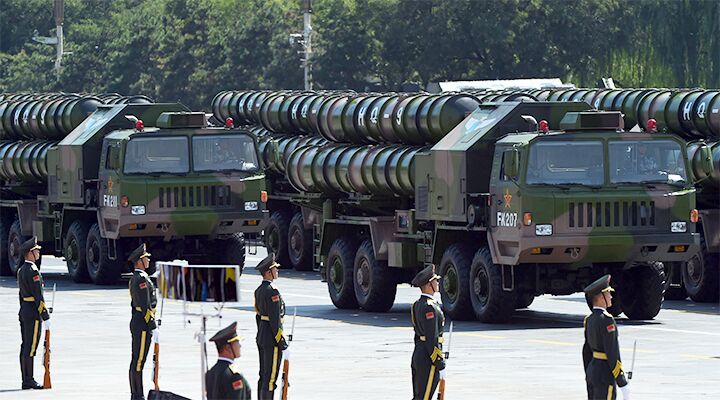 A political, not military, tool

As rhetoric abounds on all sides regarding the South China Sea, China has revealed that it may impose an air defense identification zone (adiz) in the region if the United States continues doing what Beijing labels “provocative moves.”

If the U.S. military keeps making provocative moves to challenge China’s sovereignty in the region, it will give Beijing a good opportunity to declare an adiz in the South China Sea.

Another source told scmp that any declaration would depend on the U.S.’s military presence.

An adiz is an extension of a country’s normal airspace, providing the country an early warning system to detect and respond appropriately to foreign, and possibly hostile, aircraft. If a foreign aircraft enters an adiz without warning, the enforcers may scramble fighter jets to identify the aircraft and determine whether it poses a threat. During the Cold War, the U.S. established the first adiz to reduce the risk of surprise attacks.

In November 2013, the Chinese dropped a bombshell when they announced and attempted to enforce an adiz in the East China Sea, which included the Senkaku Islands—uninhabited territory controlled by Japan but claimed by both Tokyo and Beijing.

Many Chinese experts denounced the original adiz in the East China Sea, seeing it as too provocative. At the same time, the Trumpet gave its analysis of China’s decision: “Beijing’s main motivation for setting up the adiz was to further expose the U.S. as an unreliable ally.”

Bound by a treaty to protect Japan, the United States flew a pair of B-52s through the adiz. Washington hoped its decision to challenge the adiz would prevent the Chinese from taking more aggressive action in the Senkaku dispute. Yet the adiz is technically still in effect (although it is not enforced). China still claims the Senkaku Islands and has continued rapid buildup of artificial islands in the South China Sea.

If China does set up an adiz, the expectation among many is that it will likely cover the territory described by its “9-dash line.”

China’s Defense Ministry said in a written statement that it was the “right of a sovereign state” to designate an adiz. “Regarding when to declare such a zone, it will depend on whether China is facing security threats from the air, and what the level of the air safety threat is,” the ministry wrote.

This is hard to swallow. China faced no security threats from the air when it announced its first adiz in 2013.

Beijing’s vast air power superiority in the region makes it unlikely that it would have to implement an adiz for self-defense. As the Diplomat described it, “some sort of fantastical unified Southeast Asian mega air force.” A second adiz declaration will not bring a surprise like there was with the 2013 declaration. On top of that, domestically, China has already quelled nationalistic voices that were pushing for response against Japan in the 2013 Senkaku Island dispute.

Foreign Policy discussed the idea of a Chinese adiz in the South China Sea a year ago. It saw the possibility as unlikely for a number of reasons:

Beijing has no actual control over the Diaoyu [Chinese name for Senkaku Islands]; in the latter, it does control some of the maritime features. Thus Beijing does not need to establish an adiz to make a point about sovereignty over islands and reefs it already controls. And there’s little need to further pressure or intimidate claimant states such as Vietnam and the Philippines, since these countries have little ability to wrest control of the shoals and reefs from Beijing.

If China announces another adiz, its motives will be political, whether showcasing its power or testing America’s response. Chinese officials routinely accuse the U.S. of being the aggressor in the Asian seas. However, America is simply maintaining the status quo and treaties that were signed in the 1950s. China is looking to change the status quo by claiming islands long retained by other nations and building new ones for its own use.

Trumpet editor in chief Gerald Flurry wrote about this overturn of the status quo in “China Is Steering the World Toward War” in the July issue. (We also produced an infographic on the subject.)

If no adiz is established, China is still in a good position—even just talking about an adiz demonstrates its strength in the region. When other nations are not prepared to use force, rhetoric is a powerful tool, and China will continue to use it effectively.