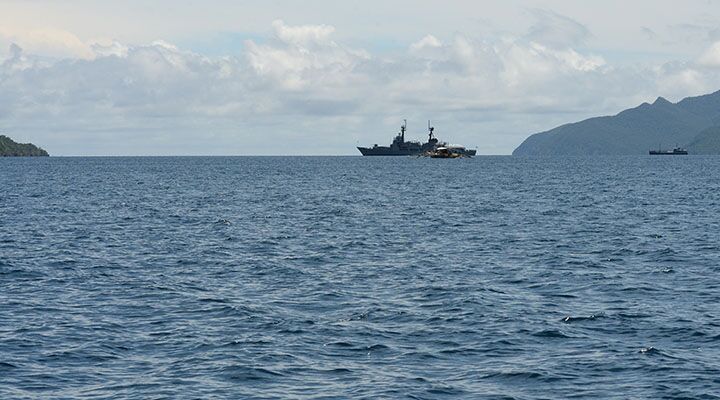 Chinese influence in Southeast Asia is rising from the seabed.

Tensions and anxieties are once again on the rise in Southeast Asia as nations make power grabs for territory, wealth and influence. Currently at least six nations are fighting over the hotly disputed South China Sea: China, Vietnam, the Philippines, Taiwan, Malaysia and Brunei. Some want a small slice, others want more. Of the six, China is claiming the most, and is aggressively working to safeguard that claim

The South China Sea is crucial to all parties involved for a number of reasons. For one, it is one of the world’s busiest shipping lanes. Much of the shipping through Asia will, at some stage, make waves across the South China Sea. Also, last year China discovered a new oil reserve in the sea. Combined with a thriving fishing industry, the South China Sea can be a great source of wealth to whoever controls it—hence the ongoing disputes.

However, the Chinese are going to new extremes to exploit the region for its strategic military significance.

China is building up a scattering of islands and reefs in the sea. These dumping and dredging projects in the Spratly Islands are creating island fortresses for the Chinese military. The man-made island strongholds contain airstrips, helipads, fuel depots, docks, anti-aircraft towers, and channels. This makes them perfect forward bases for Chinese military operations in the region—giving it access far beyond its current reach.

The addition of airstrips means China also has the ability to enforce its ruling on the “nine-dotted-line.” This line signifies China’s claim on the South China Sea—that is to say, almost the entire sea.

Both naval and air capacity will dramatically increase with the use of these island forts. One such reef-turned-refuge is Hughes Reef. Only 210 miles from the shores of the Philippines, it is over 660 miles from China. This reef gives Beijing the ability to more thoroughly and regularly patrol the disputed borders from both the sea and the sky.

The intention behind the islands is obvious: China is using typical bullying tactics on its Asian neighbors.

Consider: The buildings won’t bolster China’s legal claims to the region. Under the United Nations Convention on the Law of the Sea, only natural features can allow a country to claim rights. This means that China’s sea forts are for another purpose. China will back its claims with aggression rather than legal right.

The construction of the islands extends China’s reach deeper into the heart of disputed Southeast Asia. It is an aggressive move that is just the latest in China’s all-too-common efforts to dominate the region.

Beijing has ongoing disputes with many of its neighbors. It has an ongoing deadlock with Japan over the Diaoyu/Senkaku Islands. This spat in the East China Sea shows Chinese policy on claiming land. According to the United States Naval Institute, China has been conducting military drills to prepare it for a war against Japan to control the region. China is also preparing to enforce its claims in the South China Sea with similar military aggression.

For nations against China’s claim, the islands currently rising from the sea should be major cause for concern. The arrival of Chinese military infrastructure means China is prepared to get tough in its disputes. More worrying still, if China decides to lay claim to more land in the future, it will be ready to take what it wants.

The Trumpet has warned of China’s rise in the region for years. Now we see island fortresses literally rising from the seabed. What was once a soft power effort to boost China’s regional influence is morphing into a more belligerent approach.

China’s expansion into the South China Sea is just one aspect of its rising dominance and placement in the international community. Read “The Kings of the East” for more detail.