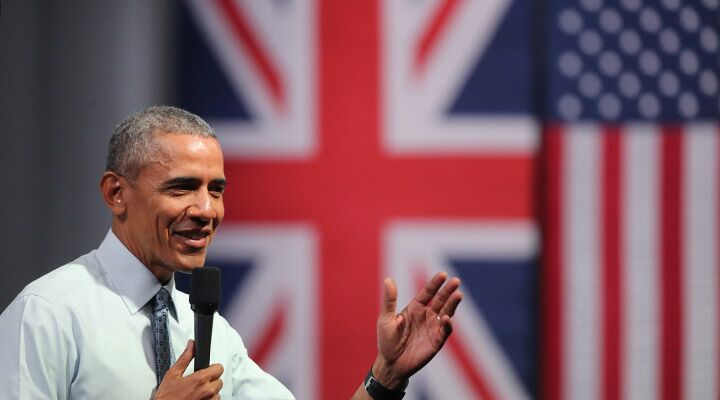 The president sends Britain to “the back of the queue” and shows what he really thinks about America’s top ally.

United States President Barack Obama provoked an uproar in the British press over the weekend. At a press conference last Friday, he offered his long-awaited take on Britain’s position within the European Union. At the briefing, he began, as he often does—saying he wasn’t in the United Kingdom to meddle in British affairs. Then he proceeded to do exactly that. He attacked the Leave campaigners who say that if they prevail, the UK could still negotiate favorable trade benefits outside the EU bureaucracy. Mr. Obama said:

I think it’s fair to say that maybe some point down the line, there might be a UK-U.S. trade agreement, but it’s not going to happen anytime soon, because our focus is in negotiating with a big bloc, the European Union, to get a trade agreement done, and the UK is going to be in the back of the queue—not because we don’t have a special relationship, but because, given the heavy lift on any trade agreement, us having access to a big market with a lot of countries—rather than trying to do piecemeal trade agreements is hugely inefficient.

The response has touched a number of nerves. Even ahead of Mr. Obama’s visit, many were pointing out the hypocrisy of an American leader encouraging Britain to remain in a union that the United States would not tolerate for an instant. It is inconceivable that the U.S. would allow a foreign bureaucracy to create most of its own laws, give foreign judges jurisdiction in its territory, and even allow American citizens to be arrested, deported and denied their usual constitutional rights based on the whim of foreign police forces. Yet here was the president urging the UK to remain in exactly this type of relationship.

But his declaration that Britain must wait at the back of the queue is what rankled the most. It confirmed to many that the special relationship between the U.S. and UK is dead.

Michael Crowley wrote in Politico that “an implied point of Obama’s call for Britain to reject a proposed exit from the European Union is that the country isn’t significant enough to remain a key U.S. partner if it’s no longer part of the EU.”

“The problem is the dismissive way in which Obama spoke about Britain: as a country that’s too small to be worth bothering with on its own,” wrote Fraser Nelson at the Spectator. “A country that might matter, as part of a massive block of the EU, but is too tiny for his ever-so-busy officials in the State Department to bother with.”

Mr. Obama spoke a great deal during his visit about the “special relationship” America has with the United Kingdom. But when it came to doing something—negotiating a trade deal—he had nothing to offer.

Ignoring his words, what does America’s actions under Mr. Obama say about the “special relationship”? What are its fruits?

Just one month in to Mr. Obama’s presidency, late Trumpet columnist Ron Fraser outlined the direction it would take:

The coming of the Obama administration has mortally wounded the natural symbiosis of diplomacy between Britain and America. This is a radical departure from the 200 years of mutual support and cooperation between the U.S. and Britain, particularly in matters of defense and security. The Blair-Bush years were the swan song for that strongest of natural, yet unwritten, alliances.

Instead, America is drawing close to new friends. Crowley noted that despite all the president’s talk, “when Obama delivers a grand address about Europe on Monday, he’ll do it from Germany—not Britain.” He continued:

The first European country to join American strikes against the Islamic State in Syria? Not Britain but France, which plays a bigger military role in the anti-isis campaign that Obama calls his top priority.When Obama wants to crank up pressure on Russian President Vladimir Putin, he calls German Chancellor Angela Merkel. It was then French President Nicolas Sarkozy who persuaded him to bomb Libya in 2011.

Crowley wrote that “it’s hard to name a way” Mr. Obama’s “affection for Great Britain … has driven his foreign policy.” He continued:

“There’s a big difference” between Obama’s relationship with the UK and that of predecessors like George W. Bush, Bill Clinton and Ronald Reagan, said James Rubin, a former State Department spokesman in the Clinton administration who now lives in London. In past years, “the special relationship had a more powerful impact on international relations, definitely,” Rubin said.

Xenia Wickett, head of the U.S. and the Americas Program at Chatham House, wrote that the UK is “increasingly … just one of America’s many strategic relationships.” She continued:

What is clear is that increasingly the UK is not “first among equals” in Europe but “one among many” for the United States. America is diversifying its relationships. More and more the U.S. can find other allies and friends to fulfill the needs in which the UK no longer has interest.

When you look at the fruits—which countries America works with, who the president talks to on the phone—it is clear that there is no longer a special relationship between the United States and Britain.

This is exactly what Herbert W. Armstrong predicted. He described in The United States and Britain in Prophecy how God prophesied of the phenomenal rise to power of both Britain and the United States. God also prophesied of our simultaneous decline. Coinciding with this precipitous decline in world power and influence is the unraveling of the relationship that once bound these two brothers so tightly together.

The Prophet Isaiah described this dramatic unraveling, which occurs just before the latter-day appearance of the prophesied Messiah: “Manasseh shall devour Ephraim, and Ephraim Manasseh; Together they shall be against Judah” (Isaiah 9:21; New King James Version).

These three Israelite nations—which have maintained such strong and durable alliances through generations—were prophesied to forsake their special alliance and to engage in furious strife and contention with one another. This is now happening before our eyes.

Because of the breakdown in this historical alliance, God says that Britain and Judah, the little nation called Israel, will turn to Germany for help in time of need, rather than the United States.

This brotherly division and these shifting world alliances are not strengthening the United States, Britain and Israel. This division comes as the world is in more turmoil than any time since the end of the Cold War—and when dangerous new powers are rising. This prophesied division is making our peoples more vulnerable to these ascending world powers! For much more on this subject, be sure to study Herbert W. Armstrong’s book The United States and Britain in Prophecy.