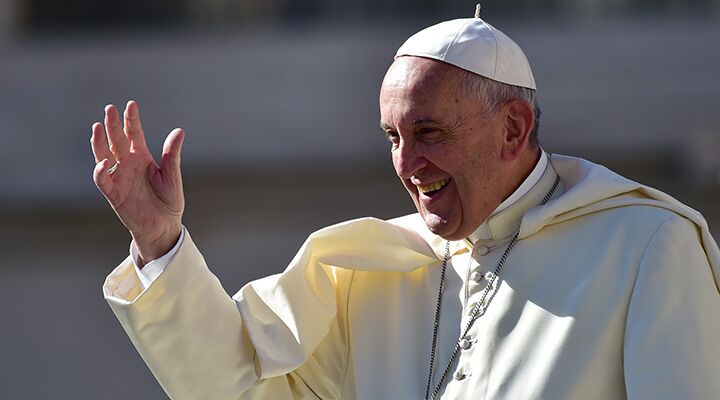 The political union of two churches will influence Europe in a major way.

Pope Francis needs to lead the world in confronting radical Islam, said the leader of approximately 600 million Protestants. Thomas Schirrmacher, chief theologian for the World Evangelical Alliance, declared this in an interview published Nov. 5, 2015. A significant push toward this movement started at the three-week-long family Synod of the Catholic Church in October 2015. Dr. Schirrmacher was among the 270 cardinals, bishops and experts attending the assembly. Die Welt reported that Pope Francis and Schirrmacher had in-depth discussions throughout the three-week synod.

Schirrmacher said that they discussed having a closer cooperation in family politics, as well as a decisive approach against the persecution of Christians in the Middle East. He said (Trumpet translation throughout):

[T]he international community would be obliged to stop the genocide. There would be a good chance for success if the Christian world, with the pope at its head, takes a strong stance for such a classification of oriental Christian persecution.

The discussions last fall appear to be bringing forth fruit. In their Easter messages, theologians of both the Catholic and Protestant churches called for more commitment in the refugee crisis. Reinhard Marx, president of the Catholic German Bishops’ Conference, asked: “When will the peoples of Europe, Russia and America finally gather to do everything to put the wars in the Middle East to an end?”

The refugee crisis coupled with German Chancellor Angela Merkel’s recent decisions are bringing the two churches together. Initially, both the Catholic Church and Protestant groups encouraged Germany to welcome more migrants. After the huge influx of refugees, however, this gradually changed; many Catholics now say it is unchristian to not control the borders.

Tagesspiegel reported on April 15 that German religious officials, both Protestant and Catholic, disagree with Merkel’s recent policies. But because the churches supported her welcoming culture in the beginning, they find it hard to express their criticism openly. Now that the chancellor is under so much pressure, the churches don’t want to “stab her in the back.” But with the intensifying refugee crisis and the genocide of Christians in the Middle East, they feel the urge to stand up and speak out.

Schirrmacher knows that Christianity will have a stronger sway if it is united. Therefore, he said, the pope can represent both churches “in ethical and political issues,” giving him the backing of 1.8 billion followers.

For some, the rise of religious involvement in politics is quite disturbing. Last month, the Left Party in Saxony said that the two churches and state are too involved with one another and need to be separated “step by step.” However, these demands received little support and may have actually backfired. Christine Buchholz (a member of the Left) asked for even stronger cooperation between both Christian groups, saying: “I much appreciate the commitment of the churches and religious communities to the refugees and [how they act] against racism.” She even submitted a request asking for a discussion about cooperation between the church and Left Party at the Federal Party Conference in Magdeburg on May 28 and 29.

The Saxony Left also demanded the abolishment of pastoral care service for the German military. This also is unlikely to happen. The Protestants and the Catholic Church are already very much united in their service to the soldiers. German Roman Catholic Military Bishop Franz-Josef Overbeck has a clear message for the Bundeswehr soldiers: “We, as a church, stand at your side—no matter what may come.” He continued, saying that his support is “almost in all cases ecumenical,” and he is working closely with the Protestant Military Chaplaincy.

Schirrmacher’s and Pope Francis’s efforts have evidently not been in vain. Both churches now voice the same message: Merkel’s refugee policy has to change, the violence in the Middle East needs to end, and the persecution of thousands of Christians can’t be tolerated.

As history and prophecy show, a political system is often driven by a religious ideology. Today, we see the churches in Europe uniting under papal leadership. Soon religious involvement in politics will increase even more. To learn more about the religious future of Europe, read editor in chief Gerald Flurry’s article “Looking to Charlemagne.”