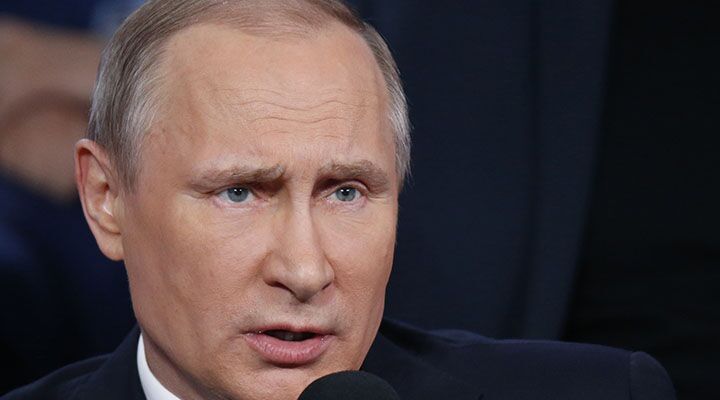 Vladimir Putin now has his own private army to enforce policies he is borrowing from both Russia’s Soviet and czarist history.

The Praetorian Guard of the Roman Emperor became infamous as one of the ancient world’s most brutal military forces. Equal parts secret service, riot police and imperial bodyguard, this corps d’elite became a permanent force only after Caesar Augustus made himself sole master of the Roman world.

These handpicked soldiers were loyal first and foremost to the emperor. After the fall of Rome, the legacy of this imperial force inspired would-be emperors from Napoleon Bonaparte to Czar Peter the Great to create private armies.

A modern-day imperial strongman is resurrecting this idea once again!

During a televised appearance last week, Russian President Vladimir Putin made a surprise announcement. He was overhauling Russian law-enforcement operations to create a domestic army that would answer to him personally. This paramilitary force will be called the National Guard and will be led by former kgb agent Victor Zolotov, a judo-sparring partner of Putin’s who once served as the president’s bodyguard.

Zolotov also spent 20 years during the Soviet era as a member of a kgb division tasked with protecting Communist Party leaders.

The basis of this National Guard will be 170,000 riot police and counterinsurgency units poached from the Ministry of Internal Affairs. This force will be supplemented with special police forces and military personnel until it becomes a paramilitary force of up to 400,000 servicemen (roughly four times the size of the British military).

According to Putin’s official televised announcement, this new paramilitary force will be responsible for fighting terrorism, organized crime and illicit drug trafficking. In close cooperation with the Ministry of Internal Affairs, the National Guard will also perform the functions currently carried out by Russian riot police units.

The creation of a paramilitary force that answers personally to Putin is an indication that the Russian leader may be growing skeptical of the loyalty of his cabinet officials. The Ministry of Internal Affairs will be severely weakened by this reform. Russia doesn’t have a decentralized system of local law-enforcement officers like the United States. Interior Minister Vladimir Kolokoltsev, who is not a member of Putin’s inner circle, runs most of Russia’s nationalized, domestic police operations. Now, whenever Kolokoltsev needs muscle to put down civil unrest that goes beyond routine law enforcement, he will have to ask Putin’s National Guard for help.

“Putin is too paranoid about losing his own power, so, today the officers’ loyalty to him personally is the priority,” Moscow political scientist Dmitry Oreshkin told the Daily Beast. “That was why Putin chose to appoint his personal bodyguard, Zolotov, to command the National Guards.”

There are also indications that Putin is growing increasingly concerned that Washington may try and stage a new Russian revolution against him. The new National Guard is being equipped with its own intelligence service and investigative powers. This intelligence service would report directly to Putin, via Zolotov, and not to the Federal Security Service of the Russian Federation.

“Of course the president is concerned, he can see that the United States wants to overthrow him, like they did to [Libyan strongman Muammar] Qadhafi, or look what they have done in Ukraine—they dream of seeing Russia fall apart, so Putin takes measures to prevent a Ukrainian-style coup,” one member of the Russian Duma’s Public Chamber told the Daily Beast.

At a time when economic stagnation is making civil unrest more likely, there are legitimate concerns that Putin’s new National Guard will be even more authoritarian than the old Internal Troops. The number of National Guard personnel will exceed 15 percent of the Russian military. This paramilitary police force has also been granted the rights to make arrests without introducing themselves and to fire without warning “in special cases.”

In comments made last January, Putin said he sincerely believed in the Communist ideology when he was serving in the kgb. He mentioned that he didn’t throw away his kgb membership card like many of his colleagues did. Rather, he still keeps it at home. Yet he also acknowledged that the embodiment of Marxist ideals in Russia “was very far from what the utopian socialists had proclaimed.”

Putin denounced Bolshevik leader Vladimir Lenin for executing Russia’s last czar and killing thousands of Orthodox priests. He said Lenin was wrong in his dispute with Joseph Stalin, adding that Lenin should have adopted Stalin’s ideas for a unitary state model instead of giving Soviet Republics the right to leave the ussr.

As president, Putin is combining Stalin’s idea of a unitary state model with imperial policies from Russia’s czarist era. Like the Byzantine emperors and Russian czars, Putin is using the Russian Orthodox Church as a de facto state religion to unify his empire. If this Orthodox-dominated unitary state isn’t enough to secure his power base, Putin now has a 400,000-strong Praetorian Guard to do his bidding!

Post-Soviet efforts to remake Moscow into a representative government have failed. Though Putin probably enjoys the public support of the majority of the people at present, any who oppose his way of thinking are quickly arrested by state police. As shocking as Russia’s regression into authoritarianism may seem, this state of affairs was foretold. To see this for yourself, read editor in chief Gerald Flurry’s article “Is Vladimir Putin the Prophesied ‘Prince of Rosh’?”