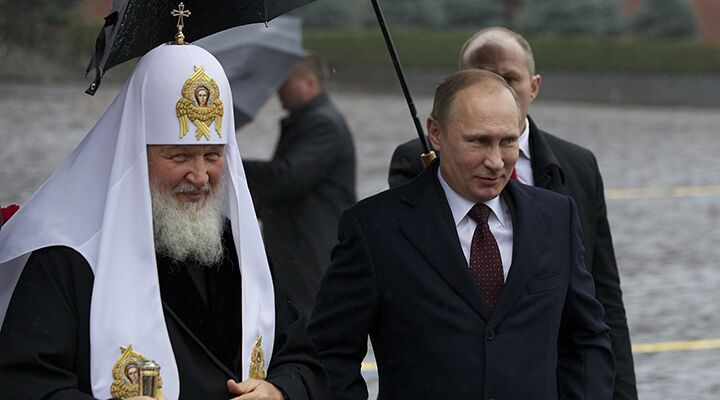 The Russian Orthodox Church has replaced the Communist Party as the ideological glue holding Vladimir Putin’s empire together.

During the Soviet era, thousands of churches were destroyed and millions of Christians were persecuted. Communist textbooks called religion “the opium of the people” and Christianity “a perverse reflection on the world.” In the 24 years since the fall of the Soviet Union, however, Orthodox Christianity has made an astonishing recovery. While only a third of Russians identified as Orthodox in 1991, over two thirds now identify as Russian Orthodox Christians.

Yet the rise of the Orthodox Church hasn’t brought religious liberty to Russia. It has simply replaced the Communist Party as the ideological state apparatus used to forcibly unite Russians!

In a court case under way in southern Russia, Viktor Krasnov is facing up to a year in prison for writing “There is no God” on VKontakte (a Russian social media network similar to Facebook). The authorities became aware of this comment when an online user contacted them, claiming that Krasnov was offending Orthodox believers. Police raided Krasnov’s apartment and forced him to undergo a monthlong examination at a psychiatric ward. Once he was deemed fit for trial, he was charged under a Russian law that makes it illegal to insult the feelings of religious believers.

It isn’t just atheists who are no longer granted religious freedom in Russia. Alexey Koptev was arrested in 2011 after undercover police officers established that he belonged to the Jehovah’s Witnesses Christian denomination. In 2009, the city of Taganrog banned the Jehovah’s Witnesses denomination for propagating the exclusivity and supremacy of its religion. This denomination now shares the same legal status as the Islamic State and the National Socialist Society.

In 2002, Russia enacted an extremism law with a provision defining religious extremism as “incitement of religious discord” in connection with acts or threats of violence. Five years later, the law was amended to allow prosecution for inciting religious discord even in the absence of any threat or act of violence. Mormons, Scientologists and even Pentecostals are now coming under increasing government pressure.

In return for public support from Russian Orthodox clergy, President Vladimir Putin attends church services and portrays himself as a defender of “Christian values.” Like the Byzantine emperors and Russian czars before him, he is using a de facto state religion to unify his empire!

“The Orthodox revival gave Russians an identity after the years of uncertainty that followed the fall of the Soviet Union,” private intelligence company Stratfor wrote last month. “The Kremlin has used this to its advantage, so effectively portraying support for Putin’s government as a religious duty that the church is now seen as part of the state apparatus.”

Post-Soviet efforts to remake Moscow into a representative government are failing. Russia has embraced an authoritarian leader driven to vaunt his nation back to the great power status he feels it deserves. This development has dangerous implications for the world. Russia is swiftly becoming a nuclear-armed czarist empire!