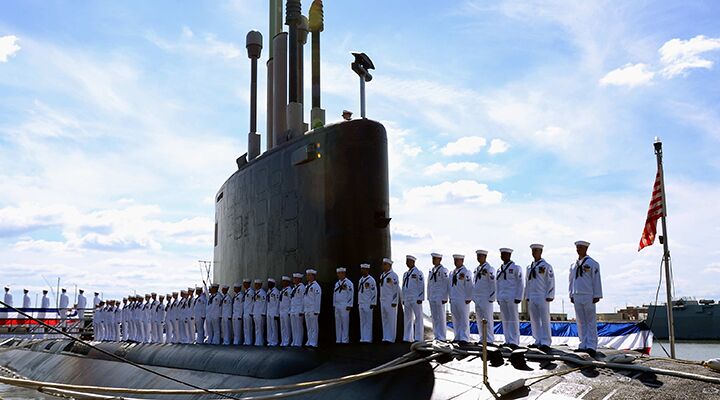 Skyrocketing costs and an aging military are conspiring to leave America vulnerable in unsuspected ways.

Over 70 percent of the surface of the Earth is water. Early in its history, leadership in the United States understood the vital importance of creating a strong, reliable naval force to protect our borders and trade. During the Reagan era, the U.S. Navy boasted a fleet of 600 ships. Today, 272 ships are deployable in combat and support assignments. There has been a 20 percent reduction in the number of usable ships since 1998.

With the explosive cost of new technology and ship building, difficult decisions must be made. There is only so much money available to maintain our force and build security for the future. We simply cannot afford a 600-ship navy, and many defense experts argue we don’t need that many due to weapons advancements and other technology developments.

Submarines have become increasingly more important than surface ships in many ways. The New start treaty will migrate more nuclear weapons from land- and air-based systems to our ballistic missile submarine fleet. Currently, 50 percent of our nuclear weapons are deployed at sea, but that will increase to 70 percent by 2018.

The U.S. Navy uses three different classes of submarines. The ssgn, which is a guided-missile submarine, is used for conventional missions, including the deployment of special forces. The Navy plans to decommission these types of submarines which will dramatically affect our conventional strike capacity—ssgns carry over 150 Tomahawk land-attack cruise missiles. But we cannot afford to maintain this class and procure replacement submarines of the other classes.

The ssn is a nuclear-fueled attack submarine. They are used to hunt, track and even attack enemy submarines, including other nations’ ballistic missile submarines. A downside to this class is the limitation on the number of Tomahawks it can carry—only 12 per sub. The Navy is currently procuring more of these subs as they decommission the ssgns.

Lastly, the Navy deploys ssbns, which are the nuclear missile-capable submarines that carry the majority of our nation’s nuclear weapons. Strategically, these are the most valuable component of the nuclear triad (land-, sea- and air-based nuclear weapon-delivery platforms). They are stealthy, mobile and can bring our weapons closer to the target, thus reducing response time of the intended targets. Nobody underestimates the value of these submarines. The problem is they are aging, and replacing this fleet of submarines comes with staggering cost. Many estimate a replacement Ohio-class ssbn (research and development name ssbn[x]) will cost over $10 billion each! The Navy already has allotted more than $100 billion to develop and build out a fleet of these new boomers.

Of course, the U.S. Air Force is developing new long-range stealth bombers to deliver airborne nuclear weapons. They also intend to upgrade their intercontinental ballistic missiles (icbm). Maintaining all of our nuclear forces is estimated to cost taxpayers $348 billion over the next 10 years according to Daily Beast’s estimates in January 2015.

Maintaining and modernizing our nuclear forces is unrealistic with our incredible national debt. Every penny that is invested is crucial. The various branches of our armed forces fight over the defense budget, because we simply can’t keep pace with the demand.

A number of different publications reported on March 29 that one of our newest ssns, the uss Minnesota, is tied to port in an effort to make it seaworthy. This $2.7 billion attack submarine, was delivered in 2013, was hailed as a great success for military procurement. It was delivered almost one year ahead of schedule, very atypical! The problem is, it was delivered with known manufacturing defects that cripple the new sub. Some of its vital engine components were not manufactured and installed to specification. Making matters worse, there appears to be evidence of fraudulent welding and other cosmetic additions to pass the ship through inspection. According to the Navy Times, a $10,000 pipe failed inspection and upon review it was revealed that the pipe was delivered to appear up to spec. The poor workmanship was fraudulently covered up rather than corrected. Steps to correct the problem are currently under way, keeping the ship from its intended use.

Discovery of this defective pipe prompted investigation into other parts delivered by the U.S.-based contractor. Two subsequently constructed multibillion-dollar subs were discovered to have the same defective pipes installed. The Department of Justice is now investigating the matter to determine if criminal charges or other punitive measures will be taken.

This nation is under a curse for disobedience to God’s laws (Leviticus 26 and Deuteronomy 28). These unavoidable curses are taking down this once great superpower. At a time when the Navy is called upon to expand its operations and function under a constricting budget, this fraudulent example reinforces the desperate situation America finds itself in. After investing more than $6 billion, the U.S. Navy has three new submarines that are not seaworthy—or, at a minimum, are a risk to their crews if deployed. Repairs must be made.

It is not just a matter of losing its will to fight, the United States is plagued by a diminishing capacity to fight. It has become increasingly reliant on technology, which, despite its benefits, also carries terrible risks. These submarines are essential to providing national security and war-fighting capability. They are replacing older technology that is more costly to maintain and not as effective as the new deployments. But what value do replacements have when domestic contractors concern themselves more with profit than their obligation to manufacture equipment to specification? What other components might be cosmetically up-to-spec but, in reality, pose a great weakness to the forces? Surely this has happened historically, but the consequences of last month’s revelation about these defective parts is demoralizing and deeply frustrating.

This nation is under a curse and new weapons systems won’t reverse our steady decline in power. As the Trumpet has discussed, other weapons systems, such as the F-35 fighter, are being fielded with known flaws. The price our nation and its servicemen and servicewomen will pay is catastrophic.