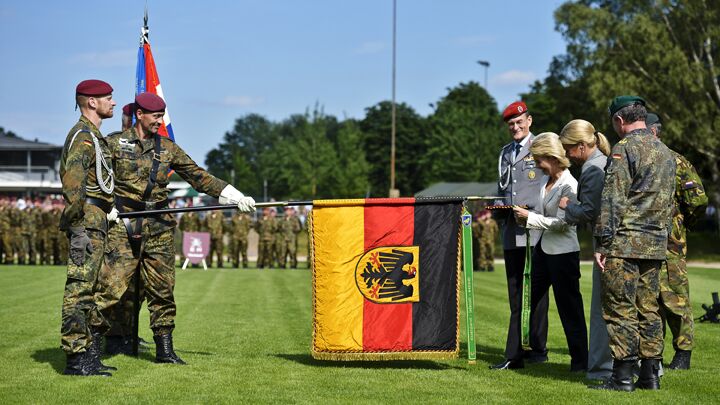 The Netherlands’ only airmobile brigade is now under German command.

The Dutch 11th airmobile brigade officially joined the German Army in a ceremony attended by Dutch and German defense ministers, June 12. This is an “historic moment,” said Dutch Defense Minister Jeanine Hennis-Plasschaert, adding that it lifted “German-Dutch cooperation … to a new level.”

The Dutch soldiers will now be part of the German division of fast response troops. They will be under German command, with a German major general, a Dutch deputy and a joint division staff—though both nations must agree before the forces are deployed, and the Dutch troops will remain on their bases in the Netherlands. The division staff should be in place by 2016, with the unit fully operational in 2018.

This merger comes after an agreement between the two nations was signed in May 2013. The Dutch government’s main motivation, it freely admits, is cost saving—the two nations can now pool equipment and training costs. As we noted last year:

The new merger shows how Europe’s economic troubles could revolutionize its military. All across Europe, nations are under heavy pressure to cut budgets. Politically, it is easier to cut military budgets than many other areas of state spending. Cut the defense budget, and people grumble. Cut social spending, and they riot.

In the wide European context, this is a small step. But it sets a major precedent—a blueprint for how things could be done in the future.
At the same time, European nations are keenly aware of the need for military spending. They see the spread of radical Islam in northern Africa, and the retreat of America. French President François Hollande committed to keeping France’s defense budget at €30 billion (us$39 billion) a year, despite calls to cut it. That’s not too surprising, since the nation just spent an estimated €205 million ($265 million) in Mali.The pressure on leaders like Hollande will get stronger. In a way, military pooling is a win-win scenario. All the nations involved get to cut their costs, while the resulting army is stronger than the sum of its parts. Ten battalions, 1,000 strong, from 10 different countries cannot be as effective as one division, 10,000 strong, provided the division is well-integrated. Not only can the larger division work better together, but all the support staff can be organized much more efficiently.As the economic crisis bites, we will probably see more EU countries “go Dutch,” heading toward forming a common European army.

The big downside to this, of course, is a loss of sovereignty. This is the Netherlands’ only airmobile brigade. Putting it under German command means that the Dutch will need German approval if they ever need to deploy troops in large numbers quickly.

In the wider European context, this is a small step. But it sets a major precedent—a blueprint for how things could be done in the future. The Dutch government is so concerned about cost saving on its army that it didn’t simply form a joint brigade with Germany. It actually had its soldiers brought into the German Army. The Dutch still have significant safeguards—they will not be stationed in Germany for example—but this is still a new form of military cooperation. We can’t know what went in to all the negotiations behind this deal. But it’s hard to imagine the Dutch saying Hey, Germany, can we put our soldiers under your command? Rather, it seems more likely that the Dutch were seeking cooperation, and Germany responded with, Yes, we’ll do it, but only if we’re in charge.

“Germany is driving the integration of European defense,” Deutsche Welle wrote when this deal was agreed to last year. By forming these kinds of agreements with the neighbors, Germany hopes to build a European army piece by piece, as its grand plans to create one in a hurry have been blocked thus far. For more information on Germany’s push for a European army, read our article “Under Construction.”