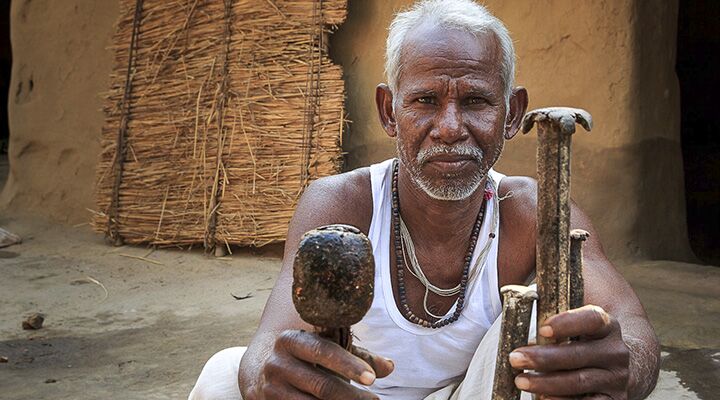 Today, if you find yourself in Gehlaur village in northeast India aiming to travel to the nearby city of Gaya, you will have no problem. You’ll simply take the smooth road that cuts through the steep, rocky hills and leads directly into the city.

For the first several thousand years of the village’s existence, that road wasn’t there. Anyone who needed to travel from Gehlaur to Gaya could either walk 32 miles around that spine of mountainous terrain, or they could take their chances climbing over it.

Back in the early 1960s, a young woman named Falguni Devi opted for the second choice. She needed to bring some food to her husband, who was working on the other side of the hills. She didn’t have time to walk 32 miles, so she took the direct, hilly route. During the ascent, she stepped on some loose rocks and fell. She slid a considerable distance and was hurt.

This was not uncommon on the Gehlaur hills. Throughout the generations, many had slipped and become injured. The villagers of Gehlaur had learned to live with this mountain-size fact of life.

Falguni needed medical attention. Her wounds needed to be dressed. So her husband, Dashrath Manjhi, stayed with his wife and sent for a doctor.

No doctors lived in Gehlaur village, so one had to be summoned from Gaya. The doctor didn’t want to risk climbing over the mountains, especially since night had fallen by the time he was reached. So he took the long way around.

The doctor arrived early in the morning and treated Falguni’s injuries. But it was too late. She died because of a lack of timely medical treatment.

Tragic though it was, this too was something the people of Gehlaur had learned to live with. All the doctors lived in Gaya. There was a mountain in the way. So some villagers were going to die from lack of timely treatment. It was tragically common.

But after his wife’s accident, something uncommon happened in the mind of Dashrath. He suddenly and forcibly rejected the common view—the apparent fact of life—that you just couldn’t avoid occasional injuries and deaths caused by the Gehlaur hills.

He wanted to subdue the mountain that had destroyed his wife. He also wanted to prevent others from suffering the same fate his family had. So Dashrath decided to take action.

The day after his wife’s death, Dashrath sold his three goats. He bought a large hammer and chisel. That very day he started chipping away at the rocky hills.

When he wasn’t working at his job as a farm laborer, Dashrath was working on moving this mountain.

When he wasn’t working at his job as a farm laborer, Dashrath was working on moving this mountain.

Every day at 4 a.m., Dashrath was on that hill, hammering away at the rocks until 8 a.m., when he had to leave for his job. As soon as he finished his work in the fields for local farmers at 1 p.m., he had a quick meal and hurried back to the hill. There he chiseled and hammered and dug until dark.

Dashrath did this day after day. Week after week, and month after month, he dug.

When Dashrath took on the mountain, he did not win any popularity or respect from his fellow villagers.

News spread quickly throughout the village that he had lost his sanity. Many thought he was devoting his time to an impossible goal, so they ridiculed him.

In 2007, he was interviewed by the Indian newspaper Tehelka. “Most villagers taunted me,” he said.

In a 2015 interview with Milaap, India’s largest crowdfunding platform, Dashrath’s nephew Dahu Manjhi said: “People told Dashrath Manjhi that he wouldn’t be able to do it. That he is a poor man who just needs to earn [a living] and eat. Manjhi’s brother, too, used to call him mad. But in his madness, Manjhi kept cutting the mountain.”

When I started hammering the hill, people called me a lunatic, but that steeled my resolve.
-Dashrath Manjhi

Even those closest to him ridiculed his effort. But Dashrath was unfazed.

“When I started hammering the hill,” he said, “people called me a lunatic, but that steeled my resolve.”

So he kept hammering at the hill.

About four years passed. Dashrath continued to get up every morning and battle the hillside. But by that time, some of the villagers had stopped ridiculing him. Because he was winning.

Part of the hill was gone.

Dashrath had made progress that no one could deny. A few villagers even helped him buy tools. Some gave his family food.

After 22 years of missing hardly a day on the project, he had finished moving the mountain. He had broken through.

Dashrath Manjhi had singlehandedly carved a broad canyon through the rocky spine of the Gehlaur hills. The passage he carved out was 360 feet long, 30 feet wide, and as much as 25 feet high.

That’s about 135,000 cubic feet of rock that he had broken away and moved, little by little.

In place of all that stone, Manjhi left a smooth, flat road. Now anyone can safely walk—even drive—through the Gehlaur hills.

The road reduces the distance from Gehlaur village to Gaya to about a quarter of what it had been.

After finishing the epic project in 1982, Manjhi was recognized by the Indian government. Local authorities named his handmade road after him. The media nicknamed him “Mountain Man,” and one documentarian told his story in film.

Dashrath Manjhi died in 2007 at the age of 73. But his road remains as a gift, not just for the people from his village, but for the whole region. People from over 60 villages now use Manjhi’s road.

Giving to others is just what Manjhi had desired. “This hill had given us trouble and grief for centuries,” he said. “The people had asked the government many times to make a proper road through the hill, but nobody paid any attention. So I just decided I would do it all by myself. My love for my wife was the initial spark that ignited in me the desire to carve out a road. But what kept me working without fear or worry all those years was the desire to see thousands of villagers crossing the hill with ease whenever they wanted.”

That was the vision that kept Manjhi digging nearly every single day for 22 years.

There is much to be learned from the example that Manjhi set regarding vision, focus and being service-oriented. It also provides a glimpse into the extraordinary potential of even the most “ordinary” of human beings. Above all, his story shows the power of daily effort.

The minuscule achievements of each of those individual days added up to become a staggeringly momentous accomplishment.

The work that Manjhi accomplished in any one day was barely noticeable. It was so slight that it earned him only ridicule for the first several years. But he kept at it—for more than 8,000 days. The minuscule achievements of each of those individual days added up to become a staggeringly momentous accomplishment.