Europe seeks to confront a dangerous world by shortening the nuclear fuse. 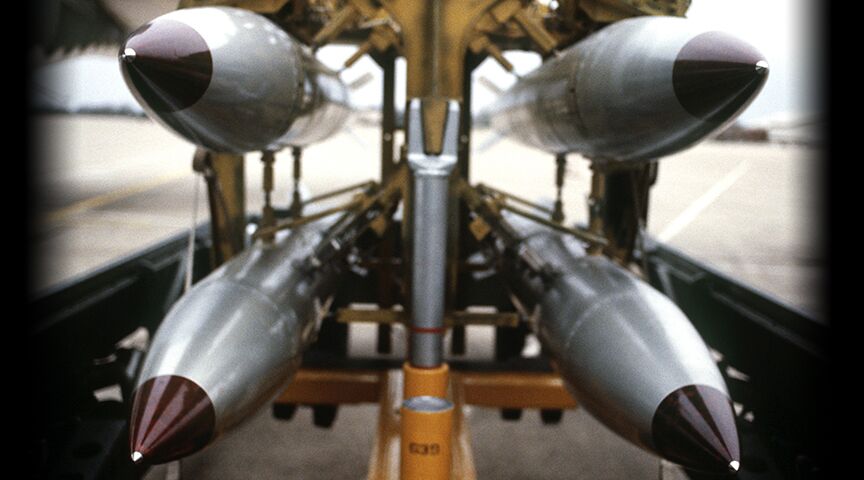 Europe seeks to confront a dangerous world by shortening the nuclear fuse.

European leaders want to improve the Continent’s nuclear capability in response to Russia’s invasion of Georgia and Ukraine. Russia has paired its increased aggression and buildup of conventional forces with an expanded nuclear program, and Europe—especially Eastern Europe—is getting scared.

“Some Central European states are demanding a greater role for nuclear weapons in order to more credibly deter further Russian aggression in Europe,” wrote the German Institute for International and Security Affairs (swp), a think tank responsible for advising the German Parliament, in January. nato’s current policy says that it will only use nuclear weapons under “extremely remote” circumstances. These Central European states want that policy updated to a stronger threat.

Russia has given them good reason to fear. The Federal College for Security Studies (baks), a German government think tank that advises on defense and security, wrote last year in its “Working Paper on Security Policy No. 3/15” that Russia has been playing “military mind games” with its nuclear weapons: for example, simulating a nuclear attack on Poland.

Since 2008, “the nuclear arsenal of Russia has been steadily strengthened and improved,” baks wrote. “New ballistic missile systems have been introduced and stocked with more warheads. Modern submarines replaced the models originating from the times of the Cold War. Far-reaching cruise missiles were tested, resulting in a serious violation of the disarmament treaty on intermediate-range missiles” (Trumpet translation).

“There is a fear that Moscow reduced its nuclear inhibitions threshold and that it will increasingly include nuclear threats in its policy toward its neighbors and nato,” baks wrote.

In response to all this, a “debate about revising the alliance’s nuclear doctrine is likely to be unavoidable during and after the mid-2016 Warsaw nato summit,” wrote swp in its report “Germany and the Role of Nuclear Weapons” (op. cit.). baks wrote, “The question of nuclear deterrence, in the last two decades more of a side issue, is forcing itself into the foreground.”

Just six years ago, Germany’s vice chancellor wanted nato’s nuclear weapons out of Germany. Now they’re there to stay, and some Polish leaders are calling for nato nukes to be deployed in Poland.

Instead of discussing a reduction in nuclear arms, these German think tanks are talking about Europe becoming better at using them. “Nuclear-capable nato fighter jets, which can be fitted with U.S. nuclear bombs, have a response time of about 30 days,” wrote baks in a separate article last year. “This imbalance has led to calls to reduce response times … and to step up military exercises in the use of nuclear weapons” (“The Agenda of the nato Summit in Warsaw”).

“A tighter integration of nuclear weapons into defense planning is also conceivable by more closely linking conventional and nuclear defense and deterrence capabilities,” swp wrote (op. cit.). The think tank noted that “the growing role of nuclear weapons” could mean “including nuclear-capable systems in exercises and holding more frequent and more realistic maneuvers.”

Behind this somewhat opaque terminology is a dangerous trend. A nation expects to use conventional forces (tanks, planes, ships, soldiers, etc.) at some point. But a nation hopes never to employ nuclear deterrence. By mixing the two together, it is much likelier that a nation will use nuclear weapons.

Italy, Germany, the Netherlands and Belgium all have American B-61 nuclear bombs ready to fly on their own planes. These bombs are variable yield bombs. One variant currently stationed in Europe can be set to give off an explosion 50 times smaller or 10 times larger than the bomb that destroyed Hiroshima.

Many fear that because a smaller bomb will lead to a much smaller number of casualties, it is much more likely to be used. America is in the process of upgrading these bombs as part of a $1 trillion upgrade program to the B-61 Model 12. One important new feature will be the conversion of these weapons into smart bombs. These upgrades are highly controversial. A pinpoint-accurate, guided “small” nuclear bomb is a different weapon from a massive nuke designed to wipe out entire cities.

Whether Europe gets these bombs remains to be seen. The United States does not plan to deploy the new bomb until the 2020s. But the fact that America is pouring so much money into upgrading the bombs shows that no one is planning on removing them from Europe any time soon.

A Matter of Concern

The Trumpet has long pointed to the role Russia’s aggression is playing in forcing Europe to unite—especially militarily. This renewed focus on nuclear power is the most dangerous manifestation of this trend yet.

This trend could also see America giving Europe more control over American bombs on the Continent. Reducing the response times for striking with these bombs and better integrating them with military forces would almost certainly mean giving the host nations more control over them—reducing the number of steps to get these bombs out of U.S. control and onto European planes.

America probably won’t have a problem with that. It completely trusts Europe. But as the Europeans become more unified and more urgent about wielding nuclear weapons more effectively, the Americans should consider whether this is wise.

Even 20th-century history should give us pause when Europe starts talking about “a greater role for nuclear weapons.” Russia is unquestionably a dangerous threat. But Europe’s history—both recent and distant—should sound a stark warning on the dangers of enhancing its nuclear power.

“Nuclear weapons are a horrific menace,” wrote Trumpet editor in chief Gerald Flurry in 2014. Regarding nato’s nuclear arsenal on European soil, he wrote, “The crucial question is, does the United States really have control over those bombs?”

“They remain under U.S. control unless permission is given to hand them over to the host nation in times of war. However, following a series of blunders over the years, the security of these nukes has been called into question.” In 2008, the U.S. Air Force concluded that most of the U.S. nuclear weapons storage sites do not meet proper security standards. In 2010, a peace activist was able to walk on to one of the bases and videotape for more than an hour.

“How naive is America to entrust this immense firepower to nations that so recently—and throughout history—have proved to be enemies of the free world!” wrote Mr. Flurry.

“Right now, Germany seems to be an ally of the United States. But what if this nation—our archenemy in World Wars i and ii—turned against us in the next war?” he wrote. “We want to trust Germany, but history screams that we shouldn’t! Yet, not only do we equip the Germans with our weapons, but we train their air force on American bases such as Holloman Air Force Base in New Mexico.”

History alone should provide enough warning against the trust that American leaders are placing in Germany. But biblical prophecy also sounds a shrill alarm. It reveals the horrifying outcome of current trends: that unparalleled nuclear war is coming—that America will be one of the primary targets and most-devastated victims—and that the greatest perpetrators of this assault will be an apparent ally that engaged in a shocking double-cross: Germany.

God ensured that these prophecies would be recorded and preserved so they could be understood in our day. He wants you to study and prove them so you can take warning. To learn more, read Gerald Flurry’s article “Europe’s Nuclear Secret,” and the chapter in our booklet He Was Right called “Atlantic Rift.”