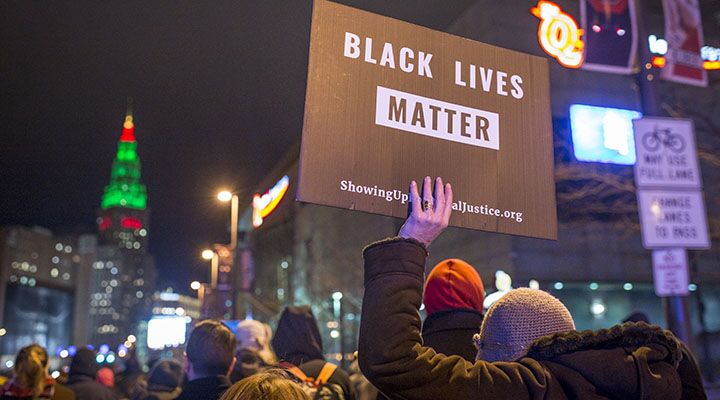 Liberals in academia and in the judiciary have long fought legal battles to undermine the Constitution. Black activists are threatening to join the fight, but with real bullets.

The death of Supreme Court Justice Antonin Scalia has roused debate about the role of the Constitution of the United States. Justice Scalia placed a high value on the U.S. Constitution, but for years, he had been fighting a losing battle to defend America’s founding document.

Back in 1997, Scalia acknowledged: “I am now something of a dodo bird among jurists and legal scholars. You can fire a cannon in the faculty lounge of any major law school in the country and not strike an originalist.”

As dangerous as these legal battles are, a new idea is making its way into the mainstream that takes this battle to a whole new level of dangerous.

(Listen to the Trumpet Hour for more on this subject.)

Alicia Garza—one of the three founding members of the Black Lives Matter movement—was paraphrased during a February 18 event at the University of Missouri as saying that “the goal of the Constitution was to make an agreement between factions known as states, which were built on the backs of black slaves.” She conflated constitutionalism with racism, saying: “The people vowing to protect the Constitution are vowing to protect white supremacy and genocide.”

That is a terrible lie. In truth, America’s Constitution has given more freedom to more people than any other government charter in history. It was the system this document built that brought so many immigrants to America’s shores and inspired so many to attain great accomplishments—accomplishments that any other system anywhere else in the world would have denied them.

It is undeniable that some of the men who wrote the Constitution were stained with the sin of slavery. Divisions between those who demanded it and those who opposed it could not be resolved, and the “Three-Fifths Compromise” left the matter for future generations to contend with. But contend with it they did, and the 13th, 14th and 15th Amendments provided the constitutionally guaranteed protections to black people previously denied them. To say that protecting the Constitution is protecting white supremacy and genocide is grotesque.

“Our Black Lives Matter protests have stormed the country, yet cops continue to kill us daily, and the judicial system continues to justify our deaths with acquittals, non-indictments and light sentences—all in the name of upholding the Constitution,” he wrote for the Afrikan Black Coalition group.

How is the Constitution implicated in this discussion about racism within law enforcement?

Perhaps the Founders’ determination to keep law enforcement on the local level is the issue. They wanted to prevent the federal government from having centralized policing authority in order to curb potential abuses of power. Today, activist critics claim that local law enforcement is endemically racist and that the solution is federal intervention. There is no evidence to support this criticism or the notion that federal policing would solve anything. It really amounts to a federal power grab.

So what is this activist’s problem with the Constitution? He explains: “I have come to realize that the Constitution is the root of virtually all our problems in America” (emphasis added throughout).

In order to understand the injustices against black folks in United States, we must look back to its foundation. The U.S. is a country that was founded on slavery, genocide, rape and white male patriarchy. The colonizers that we condemn for enslaving Afrikans [sic] and murdering indigenous peoples are the same people that produced and upheld the document we use to govern our nation to this day. Our bloodshed is rooted in this nation’s founding document, the Constitution. A body cannot be separated from its head and remain living. The Constitution and all the evil that it allows to be perpetuated are the head of White America, or more so corrupt America. Racist America. If you separate the head, the racism will die.

Where is this kind of thinking leading? That question is especially concerning when you consider the attacks on the Constitution in recent years, coupled with divisive and racist rhetoric, coming from some of the highest leaders in the land.

The authors of the Constitution, wrote Simons, “owned black people as slaves and participated in calculated genocidal tactics against the black race. … A constitution written by only white men will never serve the interests of black people. The Constitution was written for the ruling class of white men which constructed whiteness to be more valuable than any other race. When we discuss institutional racism, it is essential that we realize the Constitution created it.”

The reality is almost precisely the opposite. The purpose of the Constitution is to protect freedom and prevent tyranny. As it is destroyed, tyranny and lawlessness are certain to increase. It was initially a failure to apply the central tenets of America’s founding documents, including the Declaration of Independence, that enabled slavery to exist. It was the Constitution that helped to undo the injustices of slavery. It was the Constitution that President Abraham Lincoln used to emancipate slaves and make them full citizens of the United States.

Blake Simons then quoted the Declaration of Independence—a document written by some of the same men who authored the Constitution: “Whenever any form of government becomes destructive of these ends, it is the right of the people to alter or to abolish it, and to institute new government, laying its foundation on such principles and organizing its powers in such form, as to them shall seem most likely to effect their safety and happiness.”

“Do we not have the right to abolish the laws that oppress us?” Simons asked. “It is time to claim the Declaration of Independence and apply it to our struggle as colonized black people in America. The United States has declared war against us; it is time we demand a new constitution or tell America that she will get the bullet.”

It is hard to conceive of someone sincerely believing that it is this sort of thinking that will solve the problems of the United States.

“It is our human right to overthrow a government that has been destructive to our people,” Simons continued. “This is why we must rise up and let all people come together and write new constitution to serve all people.”

Do you want to live in an America with a Constitution written by the Black Panther Party?

I hope that the thinking reflected in these particular activists’ comments remain as far on the fringe as possible. But looking at what is happening in America today, I fear that it actually gives us a glimpse into the kind of thinking that is pushing its way more and more into the American mainstream.

And to whatever degree it is acted upon, this nation will suffer for it.