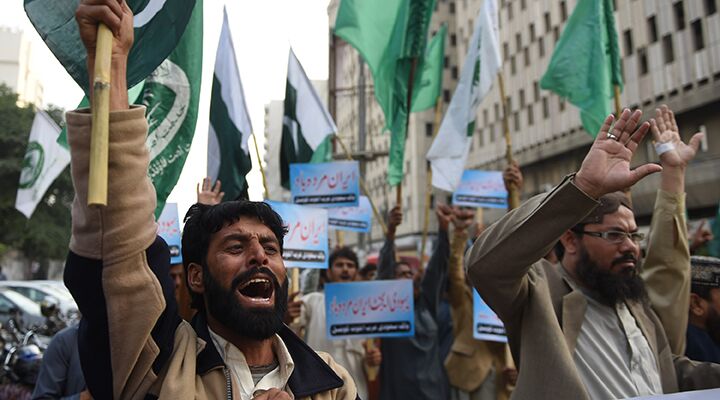 In the Middle East, two Muslim powerhouses are squaring off. In one corner is Saudi Arabia and the Sunni Muslims. Relatively unseasoned yet well equipped, the house of Saud and its allies have been working feverishly to curtail the rise of their adversary. Shiite Iran stands in the opposing corner. The battle-hardened, though slightly less technologically advanced nation has stunned the Middle East with a string of victories that have seen Iranian hegemony grow to record levels.

Unfortunately, such expansion is quickly leading to confrontation between the two powers. In the event of a conflict, what would the two sides bring to the battle?

In recent years, Saudi Arabia has worked hard to enhance its arsenal.

Reports released by the Stockholm International Peace Research Institute (sipri) indicate that Saudi Arabia is buying weapons at an alarming rate. Over the past five years, its weapons imports have increased 275 percent compared to 2006-2010.

However, Saudi Arabia isn’t alone. Weapons sales across the Middle East rose by 61 percent from 2011-2015. These findings support the idea that the Middle East is gearing up for a big fight, and that for the last five years the Sunnis have grown the most militarily.

The Saudis have also enjoyed support from their ally, the United States. The U.S. topped the list of arms exporters from 2011-2015. It’s main three clients worldwide during that time period were Saudi Arabia, the United Arab Emirates and Turkey. All three are currently working to counteract Iran’s aggressive foreign policy, particularly in Syria.

But the last year has shown one consistent fact: Friendship with the U.S. must now be shared.

At one time, Saudi Arabia could outsource much of its protection to Washington. This arrangement provided a level of stability in the region. But during the nuclear negotiations, it became clear that the status quo had changed. America would no longer play a robust role in policing the Middle East. As dean of the Advanced International Studies School at J. Hopkins University Vali Nasr mentioned in a Bloomberg interview, the Saudis historically had a monopoly on the support of U.S.-Middle East policy. “The U.S. was owned by Saudi Arabia and its allies for close to four decades. They had no relations with Iran,” he said. That position has shifted now that President Barack Obama has engaged Iran directly.

The Obama administration has facilitated Iran’s rise as Saudi Arabia’s opponent. It has not done so through weapons supplies but by granting Iran the ability to significantly enhance its power.

Following the implementation of the nuclear agreement with Iran, Tehran has free rein to trade. Sanctions and embargoes are lifting, and Iran now has access to $150 billion in frozen assets.

While the sipri report indicated Iran was a minimal importer of weaponry, it also noted that the report findings were all prior to January 16. After that date, Iran was able to legally leap back into the buying frenzy.

The scales are now starting to tip. Iran is able to drastically increase its military expenditures. Iran attempted to have the United Nations arms embargo raised as part of the nuclear deal. It wants to buy and sell weapons.

Despite the embargo remaining in place, Tehran has already had success. Since the signing, Iranian Defense Minister Hossein Dehghan has met with his Russian counterpart in Moscow. There he signed an $8 billion arms contract to purchase military equipment. Reports indicate Iran is interested in purchasing Russian Su-30 and Yak-130 jets, Mi-8 and Mil Mi-17 helicopters, the K-300 Bastion-P missile defense system (armed with Yakhont antiship missiles). Then there are also submarines and other military hardware to be discussed.

The point is: Even before Iran had access to the $150 billion, it maintained a strong military and funded military activity by supporting Hezbollah and Palestinian Islamic Jihad as well as other proxies across the region. Iran is suspected of supplying Hezbollah alone with $100 million per year.

Consider this: If Iran was so keen to invest in its military while suffering under crippling sanctions, what will it do with $150 billion?

In a cnn interview, the president’s national security adviser Susan Rice stated, “[W]e should expect that some portion of that money would go to the Iranian military and could potentially be used for the kinds of bad behavior that we have seen in the region up until now.”

Rice then goes on to justify the deal empowering Iran by saying the intent of the deal was to prevent nuclear Iran, not a militarily powerful Iran. In other words, an enhanced and upgraded Iranian military is a lesser evil than a nuclear-empowered Iran.

But that won’t fly with Iran’s regional allies. Setting aside the possibility of Iran tossing out the nuclear deal and going for the bomb tomorrow, just the fact that it is upgrading and strengthening its military is cause for panic.

The Saudis and other Sunni nations may quickly find Iran bridging the military and technology gap that has existed for the past decade.

But are the Saudis capable of going against Iran without America’s assistance?

Look at how ineffective the Saudis have been with U.S. aid in the past decade. Before the U.S. chose to empower Iran, the Saudis were already losing. Iran has been growing in regional status for years.

And Iran isn’t acting alone either.

We have already mentioned the weapons deals Iran enjoys with Russia. The presence of Russian air support in Syria is another huge benefit for Iran. But there is also China readily buying up Iran’s oil. Both backers are staunch anti-U.S. powers and would like nothing more than to see the U.S. and its allies replaced in the region. While the Saudis worry about losing the support of its largest backer, Iran is enjoying strong ties with China and Russia.

So Saudi Arabia’s chance of victory over its Shiite adversary looks increasingly unlikely, particularly if it has to fight alone.

If Saudi Arabia wants to keep military superiority, it needs allies. But where to look? The U.S. is cozying up to Iran and taking an increasingly hands-off approach in the region. The Asian heavyweights are already staunch supporters of Iran. While some African nations have lent support to Saudi Arabia, they can ill afford to spare troops from their own internal conflicts.

That leaves only one region. It is also a region suffering at the hands of the Iranian-prolonged war in Syria. It also endures sour relations with its belligerent neighbor Russia. It is, of course, Europe.

Europe in the last year has borne the brunt of the refugee crisis, bringing the Middle East problems close to home for many European natives. While domestic policies across the region have been enacted to face the inflow, little has been openly discussed regarding Europe’s role in tackling the source, the Middle East.

Perhaps the chief way Europe influences conflict at the moment is through arms trade.

Some in the European public cite Saudi Arabia as an equal partner in stirring up hostilities in the Middle East. This has led to Europe, particularly Germany, holding off on key arms deals with Saudi Arabia, including shipments of G36 assault rifles. In 2014, German arms exports fell 22 percent to the Saudis compared to 2013.

But trade is still ongoing, and the recent refugee crisis may still change Europe’s mind-set when it comes to staying out of the Middle East. Right now, Saudi Arabia is negotiating orders for turrets and frigates. Qatari arms imports have risen by 279 percent over the last five years. It has included 24 combat aircraft from France and 52 tanks from Germany. The U.A.E. has also maintained a steadily growing arms trade with Europe.

Weapons trade has formed a strong link between the Sunni nations of the Middle East and Europe. It has been further cemented by military cooperation. The Trumpet has gone to great lengths to highlight the military detachments sent from Europe to the Middle East. While some may see the troop numbers as small, the Trumpet has carefully analyzed the deployments and combined them with the trade deals to Sunni states, which paints a very interconnected picture.

If you tie that to the prophecy found in Psalm 83, which actually refers to Germany and Saudi Arabia being in an alliance, you get a clear view of a formidable opponent to Iran.

The Trumpet has written extensively on this trend. Read our free e-book Germany’s Secret Strategy to Destroy Iran for an in-depth analysis of Germany’s, and Europe’s, growing role as the game-changer and key opponent to a Middle East ruled by Iran.