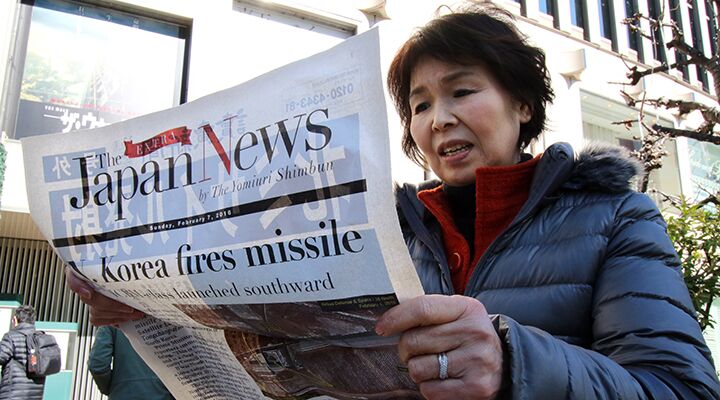 Above our heads right now is a North Korean satellite “tumbling in orbit.” Even though it doesn’t house a nuclear payload, it poses a major threat. It isn’t about to fall on somebody’s house or car. It’s much worse than that. The dangers are, firstly, that it is careening through space, and secondly, that it is the next step in North Korea’s aggressive nuclear policy.

Kwangmyongsong 4 (translated Shining Star 4), the satellite launched on February 7, is currently traveling about 300 miles above the Earth on a roughly north-south orbit, according to cbs. If it were alone in the vastness of space, there wouldn’t be a problem. But it is not alone.

When you look up at the night sky, it is not quite as empty as it appears. In terms of actual satellites above us, Goddard Space Flight Center lists approximately 2,271 space crafts in orbit. But if you add to that all the space junk, there are really millions of satellites.

Space junk can be anything from a derelict satellite to a fleck of paint. NASA tracks junk down to 2 inches in size.

It does so with good reason.

A two-inch piece of aluminum is a common piece of scrap floating in space. It looks gentle floating in the black of night, but in reality, it may be traveling at speeds over 17,500 mph. Imagine that two-inch scrap making contact with a satellite or space station. The wreckage would be spectacular. Now think of Kwangmyongsong 4 tumbling through space, out of control. It can’t move out of anyone or anything’s way.

There is less and less room to get around up there, particularly in the low-Earth orbit. Traffic is increasing, and with each launch, more debris is added to the swirling vortex around Earth. Scientists are baffled about how to solve the problem. If you launch something to clean up the low-Earth orbit, you will add more junk. If you try to shoot down old satellites, you create more junk.

Compounding the problem is the fact that since the first Soviet launch of Sputnik in 1957, many nations have learned how to launch satellites. And some nations are not as clean as others.

Take China for example. It tested an antisatellite missile on Jan. 11, 2007. The debris created by the destruction of one of its satellites is set to drift back to Earth in 100 years! One big projectile suddenly became thousands of smaller ones. And every little piece could trigger the Kessler Effect.

The Kessler Effect, also known as Kessler Syndrome, was first proposed by nasa scientist Donald Kessler in 1978. He theorized that when the density of low-Earth orbit objects is too thick, one collision could cause a cascade, quickly destroying any satellites in that particular range, rendering activity in that zone impossible for generations to come. In that zone today are scientific wonders like the international space station and the Hubble Space Telescope.

These magnificent tools have helped man come to understand some of the mysteries of the universe. Now North Korea’s recklessness poses a direct threat to any and all activity in the low-Earth orbit.

But such cataclysmic events are slight compared to what Kwangmyongsong 4’s successors could pose.

The timing also calls into question whether this test was a test of missiles more than a test of satellites.

On Tuesday, United States Director of National Intelligence James Clapper confirmed that North Korea has resumed production of plutonium at a reactor in Yongbyon. Kim Jong-un had announced that plutonium production was restarting back in September last year. Clapper said that “North Korea has been operating the reactor long enough so that it could begin to recover plutonium from the reactor’s spent fuel in a matter of weeks to months.”

These revelations come on the heels of what North Korea claimed to be the successful test of a hydrogen nuclear weapon in January.

You can top all this off with the usual anti-American rhetoric that pours out of Kim’s dictatorial regime. Combine these factors, and you have a radical nation that could easily provoke nuclear war.

North Korea’s strategy didn’t stop when it gained nukes. Its strategy now seems to be about gaining the means to counter and challenge the United States, earning concessions in exchange for promising a toned-back approach, and developing regional ascendency.

Kim Jong-un’s defiant acts show there is little to no fear of backlash from the United States. This will undoubtedly embolden the regime and give it reason to push even harder next time.

This year, Kim has already tested a nuclear weapon with little to no response. Then he flew a crude satellite that passed over America, tumbling over San Jose, California, just one hour after the Super Bowl ended. Again, there was practically no response from the White House.

What will the Koreans try next? This is the real danger of letting North Korea keep doing what it wants. Each time it is given a free pass, it actually receives another opportunity to push the envelope further. And each time, America’s prestige in Asia becomes slightly more eroded. Allies like Japan, South Korea, the Philippines and Australia are watching to see how the U.S. reacts to these threats. If the U.S. can’t stand up against nations like North Korea, how is it going to stand up against the likes of China? There is little to no confidence in Washington because America is being replaced in Asia by China and its puppet, North Korea.

Watch as Pyongyang grows even more confident in its abilities in the ensuing months. And watch as the U.S. decline intensifies throughout the region.

The Trumpet has written extensively on the declining U.S. presence in Asia and abroad. Few news sources will link events such as North Korea’s rocket launch with the ramifications of a dying superpower. But look at the region. China is building man-made islands in the South China Sea, unopposed. China has started up the Asian Infrastructure Investment Bank, opposing the U.S.-led Trans-Pacific Partnership. China also steals U.S. military secrets while North Korea hacks and threatens major U.S. companies.

Keep watching. We are going to see more and more aggressive policies coming out of Asia as America’s enemies rush to fill the power vacuum. For more on this trend, request and read our free booklet Russia and China in Prophecy and our article “The Kings of the East.”