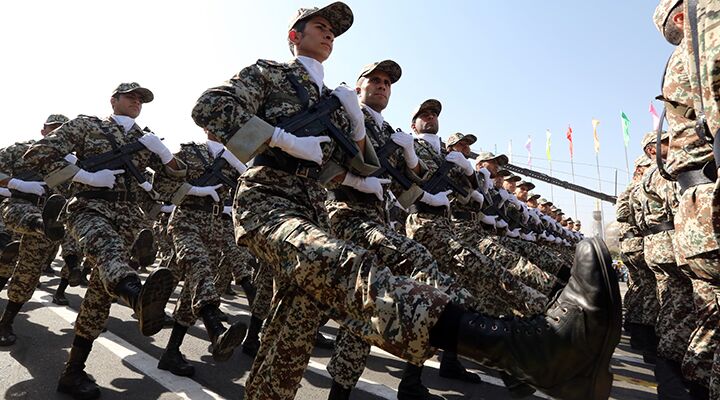 According to a United States intelligence report, Iran’s national character remains belligerent as ever. Why then has its public image changed drastically in the past few months?

The Office of the Director of National Intelligence (odni) released its annual “Statement for the Record Worldwide Threat Assessment of the U.S. Intelligence Community,” which, as usual, condemned Iran as “the foremost state sponsor of terrorism.”

Released February 9, the report doesn’t detail anything particularly revealing about Iran’s track record of belligerence; the Islamic Republic of Iran has bankrolled terror since its founding at the Iranian Revolution of 1979. But there’s a subtle difference between the 2015 and 2016 reports that is extremely revealing and very disturbing.

The 2015 report lauded Iran for bolstering Iraq’s military, Peshmerga fighters and Shiite militants in their fight against the Islamic State. It discussed how “the rise of [the Islamic State] has prompted Iran to devote more resources to blunting Sunni extremist advances that threaten Iran’s regional allies and interests” (emphasis added throughout).

In an apparently positive light, it added that “Iran’s security services have provided robust military support to Baghdad and Damascus, including arms, advisers, funding and direct combat support.” It even went on to note “Iran’s intentions to dampen sectarianism, build responsive partners, and deescalate tensions with Saudi Arabia”—of all nations, we could add.

In the “Terrorism” section of odni’s 2015 threat assessment report, Iran was completely omitted for the first time since National Intelligence Director James Clapper added Iran to that section in 2012. At that time, observers were quick to draw connections from that glaring omission to the Obama administration’s desperation for a nuclear deal at any and all costs.

For example, Israeli think tank Meir Amit Intelligence and Terrorism Information Center said that the weakening of Iran’s threat assessment “results from a combination of diplomatic interests (the United States’ talks with Iran about a nuclear deal) with the idea that Iran could assist in the battle against the Islamic State in Syria and Iraq and maybe even in the battle against jihadist terrorism in other countries.”

Council of Foreign Relations member Max Abrahms observed: “I think that we are looking at a quid pro quo, where Iran helps us with counterterrorism, and we facilitate their nuclear ambitions and cut down on our labeling of them as terrorists.”

When a delegation of seven senators quizzed Clapper about how his “annual assessment contains no meaningful reference to the chaos that Iran manufactures through its support for terrorist groups and proxy organizations,” Clapper acknowledged on June 3 that Iran was indeed a threat.

A specific reference to the terrorist threat from Iran and Hezbollah—which was not included in any of the drafts of the testimony—would have been appropriate for the 2015 assessment, but the lack of its inclusion is in no way a change in the [Intelligence Community’s] assessment.

An anonymous congressional source interviewed by the Washington Free Beacon summarized the concerns of some observers:

Whether you’re talking about the U.S. Intelligence Community’s annual Worldwide Threats assessment, the Pentagon’s ever shrinking annual report on Iran’s military power, or official hints that the pro-terror Iranian regime could somehow be an ally against terrorism in the Middle East, the Obama administration seems eager to downplay the dangers posed by Iran as negotiators close in on a comprehensive nuclear agreement.

Now that the deal has been finalized, it is ironic that this year’s odni report doesn’t contain any complimentary language about Iran’s activities. Now that Iran has access to global markets and upwards of $100 billion from sanctions relief, Iran has returned to the “Terrorism” section of the odni report. In that section, Iran is identified as “the foremost state sponsor of terrorism.”

Elsewhere, the report states that Iran is only adhering to the nuclear deal to preserve some of its nuclear capabilities and to gain sanctions relief. It also admitted that the intelligence community does not “know whether Iran will eventually decide to build nuclear weapons,” and that the nuclear deal only increases Iran’s breakout time for producing a nuclear weapon from “a few months to about a year.”

The 2016 report also noted that Iran is likely to use captive Americans as bargaining chips for financial or political concessions. It reported on Iran’s brazenness in launching banned ballistic missiles just one week prior to January 16, which was implementation day of the nuclear deal. Iran, it said, “presents an enduring threat to U.S. national interests.”

Needless to say, the latest report contains absolutely nothing about Iran’s intentions to “deescalate tensions with Saudi Arabia”—because those tensions actually escalated to a breaking point at the beginning of this year when the two nations severed ties for the very first time since 1988!

Can you explain these decisions with any logic? Many people can see that these are disastrous decisions. But we must understand that this isn’t simply the result of ineptitude on the part of this administration, or naïveté about how the world really works. We are seeing the aftereffects of a calculated, aggressive, satanic attack aimed at weakening and ultimately destroying the nations of Israel, starting with the world’s most powerful nation!

Request our free booklet America Under Attack to get a deeper picture of the threat assessment for the United States.