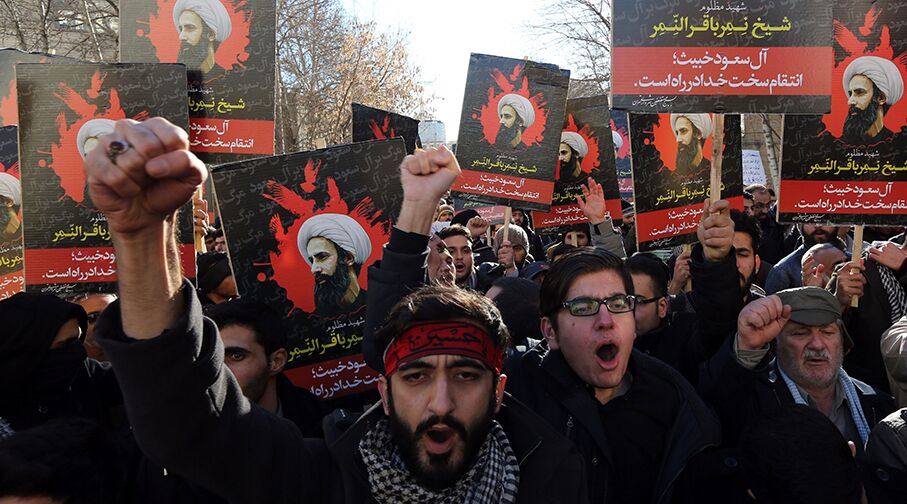 Setting the climactic sectarian battlefield for 2016

Just two days into the year, the Middle East took a gigantic leap toward a major Sunni-Shiite war.

In what might be considered the last straw that broke the camel’s back, Saudi Arabia executed a prominent Shiite cleric, prompting an immediate backlash from Iran.

Protesters in Tehran ransacked and set fire to the Saudi embassy, while police did little to intervene. In response, Saudi Arabia severed diplomatic ties, and so began the latest fracturing of relations between Sunnis and Shiites.

Hot collars and frosty relationships are nothing new between the age-old religious bodies, but the speed at which the latest incident has stirred insurrection has not been evident in recent flare-ups. This is Saudi Arabia and Iran going head to head.

The Shiite cleric Nimr al-Nimr was executed on Saturday after more than three years in prison. Arrested in 2012, Nimr was an outspoken critic of the Saudi government. He was executed on charges of inciting sectarian violence and sedition along with a range of other offenses.

Nimr was based out of eastern Saudi Arabia where most of the nation’s Shiites reside. He had campaigned for a greater Shiite presence in the nation, and had even suggested that the Shiite province of Qatif secede if his demands were not met.

Nimr was neither saint nor moderate by any standard, but neither were his captors. The Saudi regime is incredibly oppressive. Nimr died along with more than 40 other convicts on January 2. Saudi Arabia executed 158 “terrorists” in 2015. Free speech is a luxury in this nation where minorities and women suffer under a complex range of civil and religious laws.

The Saudi government sends a clear message with the execution: It will not tolerate dissent from the Shiite populace, nor will it allow Iran to establish a foothold. In a region where Iranian-Saudi proxy wars are commonplace, the Sunni government is looking to shore up its country as prospects of a more direct conflict with Shia Islam—predominantly Iran—looms large.

On Monday, two days after the execution, Bahrain followed Saudi Arabia’s lead and cut all ties with Iran.

The strong response from this tiny island nation is immensely significant; this country plays a pivotal role for both Riyadh and Tehran.

Bahrain remains a hot spot for dissent and discontent. In some ways the Arab Spring is still simmering in Bahrain. For one, the government is Sunni, while the majority of the population is Shiite. This breeds sectarian turmoil. Making matters worse, the nation is sandwiched between Iran and Saudi Arabia, the regional heavyweights. The two countries vie for power in Bahrain as they have done for years. Iran does its best to stir up insurrection from the people, while Saudi Arabia and its allies arm the government and roll in tanks across the connecting King Fahd Causeway.

The naval importance of the country dates back as far as 1935 when the British established a base of operations there. Today, the island harbors a port for the United States 5th Fleet—another reason the Saudis want to keep Bahrain in Sunni hands. Without the port, the U.S. 5th Fleet—charged with protecting U.S. interests in the Mideast—would have to find a new home.

In a less surprising move, the United Arab Emirates also joined Saudi Arabia, but it didn’t completely sever ties with Iran. The U.A.E. downsized its diplomatic presence in Iran and recalled its ambassador from Tehran.

The U.A.E., a long-time supporter of the Saudis, has joined Saudi Arabia in coalitions against Iran and its proxies in Bahrain, Yemen and Syria. Backing and mimicking Saudi Arabia is the next logical progression in its ongoing opposition to Iranian hegemony.

The third nation to fall in step with Riyadh is more of a curious choice. Sudan, another predominantly Sunni nation, has waded into the fray. It expelled the Iranian ambassador and the entire Iranian diplomatic mission. It also recalled its ambassador in Tehran.

Sudan’s actions show without a doubt that this is not just about the execution of a Shiite cleric. Nor is it just about grievances between Saudi Arabia and Iran. What we are seeing is the deepening divide between Sunnis and Shiites. Nations like Sudan don’t tend to leap into the fray like this. Sudan is on the outer rim of Iran’s reach, but not altogether free of it. It shares borders with Libya and Egypt, both of which have been dealing with Iranian-backed proxies and terror cells in recent years. Along the coast of Somalia and Yemen in the south, there has been similar violence, but Sudan has sat in the middle immersed in border disputes with South Sudan.

Regardless of the reasons, the Sunni-Shiite rift has widened substantially as of this week, and it is preparing the way for the fulfillment of some amazing geopolitical shifts.

Those who have followed the Trumpet may recall discussion of a prophecy concerning the Middle Eastern names above.

As you watch, remember the unbreakable prophecy for our day contained in Psalm 83, a prophecy that foresees the cementing of an alliance between Germany and the Arab states of the Levant and Arabian Peninsula and Turkey.

Some of the nations mentioned in this article—Saudi Arabia, the U.A.E. and Bahrain—are in that alliance. Saudi Arabia, the modern-day descendants of Ishmael, is mentioned directly. As for the other two, Trumpet editor in chief Gerald Flurry explains:

These tiny oil-rich nations discussed … are geographically attached to the southeast part of the huge land area of Saudi Arabia. We believe they are also Ishmaelites and from a biblical perspective would be considered a part of Saudi Arabia—regardless of their modern boundaries.

What ties this prophecy to the events we see in the early days of 2016 is the fact that this alliance does not include Iran. Neither does it include Iraq—another nation protesting the execution of Nimr. These two nations are destined to form a separate alliance, one you can read about in our free booklet The King of the South.

The Psalm 83 alliance is prophesied to unite after the Iranian-led king of the south alliance. We can see the two alliances forming before our eyes today! Last year, we witnessed major upheaval in the Middle East in the form of proxy wars and terrorist groups. While the roles of the Saudis and Iranians have never been overly shrouded, they rarely find themselves in face-to-face exchanges.

That makes this week so pivotal. Both are upset and harboring injustices. Neither side is willing to back down. This is a battle for control in the Middle East. Neither side will give the other an advantage to look stronger. Both sides are rallying their allies to support them. Sudan, the U.A.E. and Bahrain have all rallied around the Saudis. Iraq has come to Iran’s aid.

All this has happened when world powers were at their most hopeful. Yemen held a peace talk; talks were occurring between Saudi Arabia and Iran. Now the peace deal is shattered, the Saudis and Iranians are at each others throats.

Review our article “A Mysterious Prophecy” and keep watching. 2016 is shaping up to be one of direct confrontation between the forces of Islam—Shiite vs. Sunni.