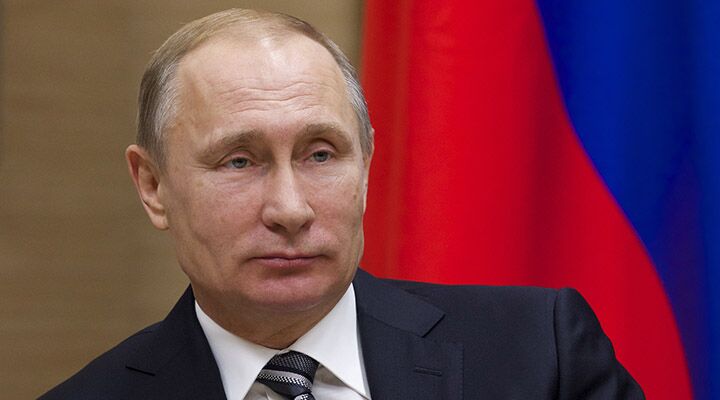 The decision to publish and distribute the book may help the Russian president to tighten his grip on power.

To celebrate the New Year, the Russian government gave hundreds of high-ranking officials a special gift: a 400-page book of “prophetic” quotes by President Vladimir Putin.

The book, titled Words That Change the World, includes 19 of the most important speeches and interviews Putin has given during the last 12 years. Hundreds of short, tweetable passages are bolded in the text.

Anton Volodin, who spearheaded the book’s publication, said Putin’s words are valuable to Russian leaders largely because they tend to be prophetic: “We noticed that everything Putin says, to varying degrees, comes true,” he said. “In this book, we have traced his words and confirmed this idea. Putin’s words can be described as prophetic.”

After Putin’s deputy chief of staff saw a copy of the book, he deemed it a must-read for all Russian officials.

He snapped up all 1,500 copies of the initial print run and distributed them to officials across the nation as New Year’s gifts. They were sent along with a letter saying the book should be viewed as a guide to the Kremlin’s “values and guiding principles.”

Another print run is scheduled for later this month, which will make the book available to the public for $11 per copy. Plans are in the works for Chinese and English translations.

The distribution of this book has sobering implications because it follows a pattern set by several of history’s darkest dictatorships.

During the days of the Soviet Union, government officials and the general public were encouraged to be well acquainted with Vladimir Lenin’s Collected Works.

These books instructed readers on how to think about everything from military science and industry to agriculture and the role of young people in Soviet society.

From 1918 to 1974, the Soviets published a total of 465,714,000 copies of Collected Works, often revising the content to conform to the party’s ever evolving policies. The Great Soviet Encyclopedia says the books “aided greatly in the party’s theoretical work and in the propagation of Marxism-Leninism.”

Then there was Mao Tse-Tung’s so-called Little Red Book. During China’s Cultural Revolution of the 1960s and 1970s, it was virtually mandatory for all Chinese people to own and constantly carry a copy of this book laying out all of Chairman Mao’s ideologies. Researches say that only the Holy Bible has sold more copies than Mao’s book.

The trouble is that Mao’s communist ideologies ended up killing 65 to 75 million people. That makes him the man responsible for more murders than any other person in history. And historians agree that his Little Red Book played a major role in advancing his lethal ideas among the Chinese populace.

And don’t forget Mein Kampf, which Adolf Hitler wrote while imprisoned before he become Germany’s chancellor. This book laid out Hitler’s plan for Germany, by naming Jews as “racially inferior” and saying they threatened the “racially superior Aryans.”

During Hitler’s reign, a copy of the book was given to every soldier and newlywed couple in Germany. Sales of the book also made Hitler a wealthy man. By the end of World War ii, well over 10 million copies had been sold or distributed in Germany alone.

Historians agree that the widespread dissemination of Mein Kampf helped Hitler win Germans over to his cause, and gave traction to his diabolical ideas.

More recently, Libya’s late Muammar Qadhafi published the eccentric Green Book. Sometimes described as a “how-to” manual for dictators, the book set out Qadhafi’s philosophies on everything from the dangers of political parties to the importance of breastfeeding. From its first publication in 1975 until Qadhafi was killed in 2011, the book was required reading for all Libyans.

Abdul Majid, an English teacher in the capital, said the work helped Qadhafi maintain his iron grip on Libya to the detriment of the country: “The Green Book was a disaster for Libya. It led the country to its current miserable state.”

Finally, we come to Turkmenistan’s late and unlamented dictator Saparmurat Niyazov. From 1985 until his death in 2006, Niyazov ruled Turkmenistan with a personality cult that put Josef Stalin’s to shame. In 2004, he published The Book of the Soul, which combined his religious instruction with revisionist Turkmenian history and plenty of forays into politics and philosophy.

Niyazov said The Book of the Soul was holy writ, on par with the Koran. With his heavily repressive state security apparatus, he made it mandatory reading at every level of elementary and collegiate education—often to the exclusion of subjects such as math and science. Niyazov even had questions about his book added to job interview scripts, civil service tests and the national drivers’ license exam.

Niyazov also had a copy of The Book of the Soul jettisoned out the airlock of a Russian space shuttle so that he could tell the Turkmen people he had conquered outer space. In 2006, Niyazov said he had made a deal with God to guarantee that anyone who read the book three times would automatically go to heaven.

The decision to publish and distribute the new book of Vladimir Putin’s quotes follows a pattern set by several of history’s darkest and most bizarre dictatorships.

Authoritarian rulers often portray themselves as the supreme source of wisdom for their nations. They believe that by demonstrating their wisdom, they can validate their absolute power. For many, writing books—and requiring subordinates to view them as sacred texts—has proven a successful way of accomplishing this goal.

It’s unlikely that the new book of Vladimir Putin’s quotes will be used to prove that he is king of outer space or to justify genocide. But if history is a reliable indication, the book could prove to be a tool that helps him indoctrinate his countrymen, silence his opposition, and tighten his grip on power.