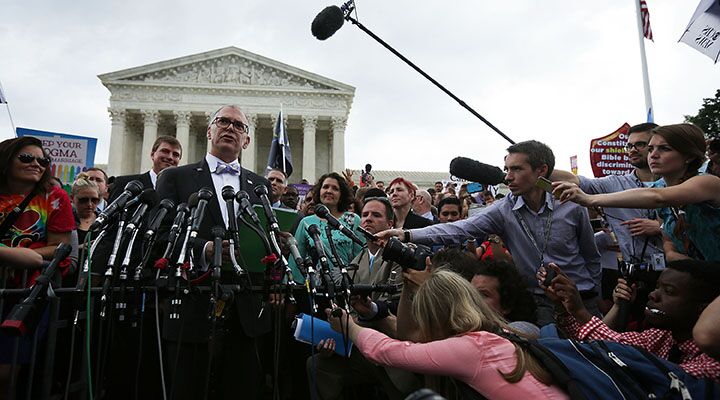 In retrospect, we can recognize that a major event took place on that date.

One year ago tomorrow, on Jan. 16, 2015, the United States Supreme Court was granted a landmark writ of certiorari, and announced that it would take on the same-sex union question.

At the time, the announcement may not have appeared to mean anything certain. It may have seemed as if the ruling could go either way.

But when the facts are weighed, we can see that from that day, the outcome of the pivotal ruling was effectively certain. That is largely because of the political leanings of the sitting justices.

The Supreme Court then, as now, was comprised of four ultraliberal justices, four conservatives and one “swing judge.”

But what about the swing judge, Justice Anthony Kennedy?

For many of the highest-profile Supreme Court cases, it all comes down to his vote. In one recent term, Kennedy was in the majority in 10 out of 10 of the cases that were determined by just one vote. His ballot so frequently makes the vital difference that he is often hailed as “King Kennedy.”

Rolling Stone said we should change the Pledge of Allegiance to say “one nation, under Justice Kennedy, indivisible, with liberty and justice as he sees fit.”

So does that mean the homosexual union decision could have gone either way?

On matters relating to civil rights and campaign finances, Kennedy has a history of usually voting with the conservative side (e.g., Citizens United v. fec, Fisher v. University of Texas). But on issues relating to the advancement of homosexual rights, he has an unblemished track record, dating back to 1996, of voting yea.

So unwavering is this pattern that some analysts have called advancing homosexual status Kennedy’s “pet agenda.” Back in 2013, Rich Lowry, the editor of National Review, summarized Kennedy’s view on the topic: “If you disagree with him about gay marriage, indeed, if you merely think the federal government should continue to define marriage the traditional way while the states define it however they want, then you are a bigot. Your views deserve no political representation.”

So, given “King Kennedy’s” stance on the homosexual movement, on the day the announcement was made, the outcome was all but certain.

The Day Bible Authority Was Rejected

In light of this, we could say that Jan. 16, 2015 was the day that the highest court in the land announced that the Holy Bible was dead in our society. Scripture had lost any authority over our concept of right and wrong.

In effect, the January 16 announcement was the Supreme Court saying it was stepping in to override state autonomy and to silence all dissenters. It said the United States would no longer tolerate any entity that deferred to the traditional, biblical definition of marriage.

About six months later, on June 26, the vote was cast and the inevitable became official.

And Kennedy even wrote the majority opinion.

“It may be the most consequential decision by the Court in a generation or more,” said former U.S. solicitor general Neal Katyal.

And the ruling wasn’t just the product of activist justices foisting their agenda on America against the will of the people. The justices are appointed by democratically elected presidents, approved by democratically elected congresses. The decision might have the appearance of judicial activism, but in fact, the Supreme Court’s stance on marriage and family reflects the majority will of the American people. It reflects what opinion polls show to be the view most Americans have of same-sex unions. This is what happens when the overriding moral climate in America is one of hostility toward biblical instruction. The primary responsibility falls on the populace who are represented by those nine justices.

The fact that this landmark announcement fell on January 16 is significant.

Trumpet executive editor Stephen Flurry explained the prophetic importance of that date in a 2010 article titled “Keeping an Eye on January 16 and 17.” “The reason we carefully watch for significant events in January is because of what happened 24 years ago,” he wrote. “On Jan. 16, 1986, after preaching the gospel of the Kingdom of God as a witness to the world for nearly six decades, Herbert W. Armstrong died at the age of 93.”

The article goes on to discuss several events of prophetic significance that have happened on that date.

Some have asked why the Trumpet watches January 16—a recurring date on the man-made Gregorian calendar—rather than the date of Mr. Armstrong’s death on the Hebrew calendar that God created, which was Shevat 6. (From year to year, Shevat 6 can fall on different dates on the Gregorian calendar.)

It is true that God is not obligated to acknowledge dates on the Gregorian calendar. But in the modern landscape, a day on the Hebrew calendar would not be recognizable by most people familiar with Mr. Armstrong’s legacy. The date of January 16, on the other hand, is a day that people can widely recognize. His death was such a high-profile event that even U.S. President Ronald Reagan acknowledged it, telling Mr. Armstrong’s supporters that they could “take pride in his legacy.”

The Gregorian calendar is a human construct. But it is recognizable to essentially the whole modern world. For this reason, God likely allows events of significance to fall on January 16—rather than Shevat 6—in order to bring attention to Mr. Armstrong’s prophesied legacy.

And now, in retrospect, we can add another major event to the list. Jan. 16, 2015 was the day that the Bible was effectively rendered irrelevant in American society. When the land’s highest court makes that decision, and then the president of the U.S. later cloaks the White House in the rainbow flag that celebrates homosexuality, it is truly amazing. A nation would be hard pressed to go further in rejecting God’s rule over its conduct.