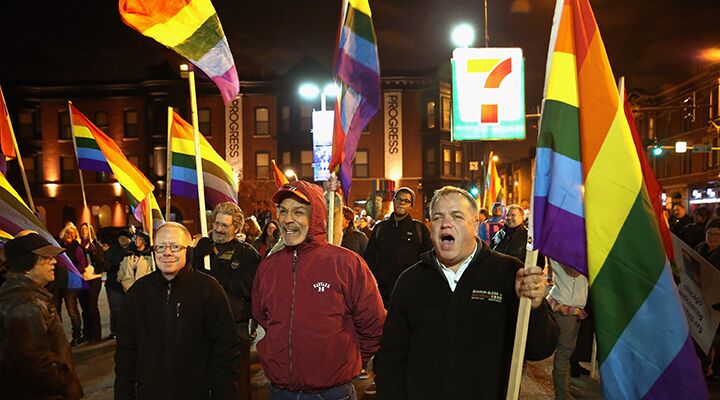 The fight to legalize same-sex ‘marriage’ may be about over.

To date, 36 states have legalized such “marriages,” while another four states have had their bans struck down by a federal judge though they are still in effect pending an appeal. In the past three months, the number of states that have legalized homosexual “marriages” has nearly doubled. On Oct. 6, 2014, the Supreme Court decided not to hear petitions to reinstate bans that had been overturned in Indiana, Utah, Oklahoma, Virginia and Wisconsin. This denial opened the floodgates, legalizing same-sex “marriage” in those states, along with Colorado, Kansas, North Carolina, South Carolina, West Virginia and Wyoming. The next day, a decision by the Ninth Circuit overturned bans on same-sex “marriage” in Idaho and Nevada, leading to the overturn of such bans in Alaska, Arizona and Montana shortly thereafter. Only 10 states still uphold their laws banning same-sex “marriage.”

To date, 36 states have legalized such “marriages,” while another four states have had their bans struck down by a federal judge.
In deciding on the issue, the Supreme Court laid out two questions that it seeks to answer:

By framing the issue to be one of state powers and obligations, rather than one of individual rights, the case boils down to one of constitutional legality. This is how many pro-homosexual “marriage” advocates see the issue. Since each state issues marriage licenses, they are violating the principle of “equity under the law” by denying licenses to same-sex couples. The Supreme Court also told the parties involved to keep their arguments to those points, indicating it did not want to argue the issue based on individual rights.

As the Supreme Court prepares to debate the issue, more and more people feel that the fight for complete legalization is nearly finished. Ilya Shapiro, a senior fellow in constitutional studies at the Cato Institute, predicts that “this Fourth of July, everyone throughout the land will be able to marry without regard to sexual orientation.”

While judges and lawyers argue what the Constitution does and does not guarantee, they fail to recognize the underlying foundation of the Constitution: the Bible. It is a plain fact of history that those who wrote the Constitution believed upholding biblical principles was required to make America thrive as a nation.

Ilya Shapiro, a senior fellow in constitutional studies at the Cato Institute, predicts that “this Fourth of July, everyone throughout the land will be able to marry without regard to sexual orientation.”
Time and time again, the Founding Fathers mentioned “religion and morality” as the two pillars that would uphold American society. Why was that? John Adams answered that question in 1798 while serving as president: “Our Constitution was made only for a moral and religious people. It is wholly inadequate to the government of any other.” The Founders recognized that the Bible was a supplement to the Constitution, and if society got away from those immutable laws of God, they would abuse the freedoms given in the Constitution (request our free booklet Character in Crisis for more on this point).

America’s moral fabric has changed radically over the past 20 years—and very rapidly. It has only been a year and a half since the Defense of Marriage Act (doma) was struck down by the Supreme Court as unconstitutional (doma defined marriage as being between a man and a woman and denied federal benefits to same-sex couples “married” in states where it was legalized). The national fight to legalize homosexual “marriage” appears to be nearing a conclusion. Will America be a stronger nation because of it? Read our booklet Redefining Family to find out.