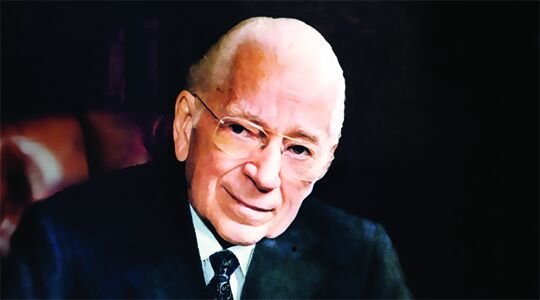 Franz Josef Strauss was a leader among world leaders. He served as premier of the prominent state of Bavaria, as West Germany’s defense minister, in three other cabinet-level ministerial posts, and as the prominent chairman of the Christian Social Union, a party he helped found, the headquarters of which is located in the Franz-Josef-Strauss-Haus in Munich.

Otto von Habsburg was head of a family that had ruled the Holy Roman Empire from the 15th century to the 19th century. He served as a member of the European Parliament, devoting his life to creating a European superstate. He authored The Social Order of Tomorrow, which espoused essentially the same ultimate vision that Strauss’s The Grand Design did: the creation of a federated United States of Europe, underpinned by Catholicism.

Herbert W. Armstrong was connected to these men in the sense that he saw in them characteristics that matched Bible prophecies about a modern German strongman. But he was also connected to them in another way: They both visited him.

In 1968, Finance Minister Strauss gave an interview to the popular radio and television programs Mr. Armstrong established: The World Tomorrow. In 1969, Strauss went to visit Mr. Armstrong at his home.

The strongman of Europe toured the award-winning buildings and grounds of the Ambassador College campus in Pasadena, which won the Professional Grounds Management Society award three times for best landscaped and best maintained campus in the United States. He met students and faculty members, delivered an address to them, toured a class, and later sat for another interview for The World Tomorrow.

The class he toured was my Comparative Religion class. It was quite an experience to see this man and his entourage come into our class. I could tell the instructor had a little difficulty getting through his lecture with Herr Strauss listening intently for a few minutes. There was a buzz all over campus that day. We didn’t know what the future held for Strauss, but we definitely felt like something unusual and significant was happening.

At the end of Strauss’s first day on campus, he made an extraordinary remark. “[H]e commented that he had just spent the happiest day of his life,” Mr. Armstrong wrote. “The peace and happiness here are contagious! Dr. Strauss drank it in. Herr Strauss said, ‘We need an Ambassador College in Germany’” (co-worker letter, June 28, 1971).

After Strauss visited Pasadena, he flew to the Ambassador College campus in Big Sandy, Texas, and then on to Houston and Washington, d.c. And interestingly, he actually sent his wife back to Pasadena to enjoy one more day on that peaceful, happy, beautiful campus.

Mr. Armstrong wrote that he kept in touch with Strauss and knew him well. Ten years later, they met again—a remarkable relationship, even among the dozens of others Mr. Armstrong had with prime ministers, presidents, kings and other world leaders.

“Incidentally, Drs. Habsburg and Strauss are close friends,” Mr. Armstrong wrote, “and for some reason I do not understand—but may be of God’s designing—both are very friendly to me and to Ambassador College” (member and co-worker letter, July 24, 1983).

God inspired the Bible with accurate prophecies of events that are happening now, centuries after they were written. He revealed those prophecies to Mr. Armstrong. He literally opened to him the office doors of heads of state. Is it possible that He inspired these great German men to come to Mr. Armstrong, and that He has some design for it?

Those men came to Ambassador College with an open mind and were deeply impressed. In the buildings, in the landscapes, in the students, in the faculty, they saw a way of life that worked! These were able men who devoted their dynamic lives to trying to better their country and their world—as they saw fit, using politics, strategy, economics, religion. They came to Ambassador College and saw something totally different, totally unexpected. It was real education that solved real problems. They saw a way of life that worked because it came not from politics or tradition or human reasoning but from the Bible.

When people fulfill their purpose for being created, they are joyful, and the peace and happiness is contagious. God’s way of life was rare in Mr. Armstrong’s lifetime, and it is rare today. But it does live on. It exists here, at Herbert W. Armstrong College.