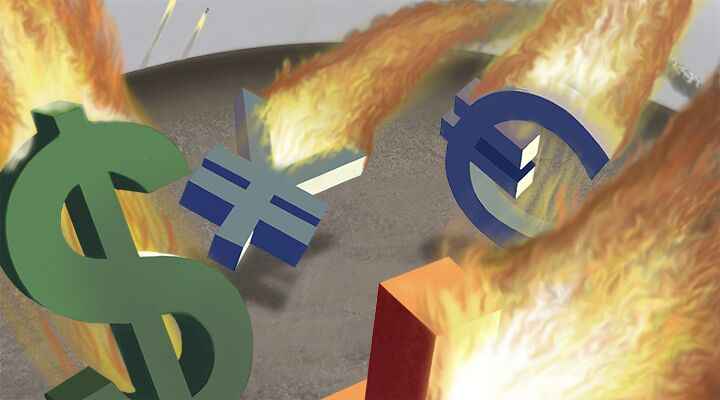 In 1934, United States President Franklin Delano Roosevelt outlawed the private ownership of gold. After confiscating billions in bullion, Roosevelt shocked the world by revaluing it. The cost for an ounce of gold, previously set at $20.67, was suddenly $35. Overnight, Roosevelt devalued the dollar by 69 percent.

The president told the country that it was a radical effort to stimulate America’s economy. A cheaper dollar would make America’s exports less expensive and help American companies sell more products to the rest of the world, he said. More money would flow into America, and more jobs would be created.

It did those things. And it also marched the world another giant step closer to war.

From the world’s perspective, President Roosevelt’s actions felt like a full-on economic broadside designed to steal a bigger chunk of a stagnating global economy. To the world, it was another—albeit much bigger—salvo in an ongoing global currency and trade war! And it responded in kind.

Today, the economic guns of 1934 are thundering once more. The world’s economy is mired. China, Europe and America face sluggish growth. Commodity prices have cratered. And demand for materials has been blown to smithereens. Meanwhile, global debt is skyrocketing. And stock markets are rattled. Desperate nations are doing everything they can—including destroying their currencies—to stimulate their economies and keep disruptive internal social forces at bay.

Could we really be headed toward world war again? The parallels are ominous.

China’s Surprise for the World

And that was just the warning shot. Over the next days, the yuan fell at an unprecedented rate—blowing multi-decade records for depreciation. The move was especially significant because, for the past several decades, China has made sure the value of the yuan closely tracked the dollar.

The fall of the yuan quickly mobilized other nations into action. Kazakhstan and Vietnam announced they would devalue their currencies in response. India, the world’s second-largest nation by population, did not even make an official announcement before it depreciated the rupee. Turkey let its lira slide for a record five days.

The international outrage was loud and clear—and it drew a response from China. On August 16, Ma Jun, the chief economist at the People’s Bank of China, emphatically reassured the world that the Chinese government had “no intention or need to participate in a currency war.” He called commentary to the contrary “completely groundless and unfounded.”

The denial was seen as confirmation that China had now officially entered the global currency fray, and that the war was headed into a new—potentially much more devastating—phase.

Former U.S. ambassador to China Jon Huntsman told cnn that “people are very, very frustrated” with China’s deliberate policy of devaluation. “China is no longer an average player in the global economy. They’re the second-largest economy in the world. And when you have the devaluation of 2 percent right off the bat automatically—you’re going to have a higher cost burden on the exports from the United States to Asia, and to one of our largest export markets, to say nothing of the impact it’s going to have on the region” (August 16).

Over the course of eight hours, Chinese products became 2 percent cheaper than they were prior to the currency markets opening that day. During the course of a week, they became 4.8 percent less expensive.

Where will they be in a month or a year? Can American exporters survive such warfare?

If this occurs, there will be retaliation. China’s currency bombardment is not happening in a vacuum—just as President Roosevelt’s action to devalue and outlaw private gold ownership did not happen in a vacuum.

The lead-up to the second Great War began in a world of great economic excesses and speculative fervor. In America it was particularly evident in the growth of the real-estate bubble of 1921 to 1926 and the great stock market bubble of 1924 to 1929—both of which were fueled by easy borrowing. In Japan, during the 1920s, the national government spent massive amounts in a futile attempt to prop up commodity prices. It resulted in its great financial crash of 1927. In Europe too, the origin of the crisis can be pinned on excessive debt. The failure of little-known Austrian bank Credit-Anstalt triggered a wave of bank failures, and an economic downturn that swept the Continent.

When the debt bubbles exploded, the resulting economic downturns led to wave after wave of currency devaluation. Germany, Hungary and Italy virtually destroyed their currencies in an attempt to stimulate their economies.

In 1930, America responded by passing the Smoot-Hawley Act to protect American producers. Historian Richard Hofstadter called the law, which raised the tariffs on 20,000 imported goods to record levels, “a virtual declaration of economic war on the rest of the world.”

The impact ricocheted. Twenty-three major trading partners sent letters of protest and threats of retaliation. They were ignored. In May 1930, America’s greatest trading partner, Canada, reacted by imposing tariffs on more than a dozen products that accounted for almost a third of U.S. exports to Canada. Within two years, 25 countries had fired back.

But the Smoot-Hawley Act was really just one shot in an ongoing economic war that was already hot and about to get hotter.

The ink was barely dry on Smoot-Hawley before Australia abandoned the gold standard by devaluing its dollar by more than 40 percent. Its economy experienced a boost as it immediately captured a greater share of global exports. New Zealand and Japan saw that success and devalued in 1931, each experiencing a similar result as their exporters gained temporary advantage over those in countries that had not recently devalued. Britain soon broke its peg to gold. France, seeing Britain’s economic problems, re-pegged the franc much lower to gold.

By 1933, at least nine major economies had enacted a currency devaluation to grab a greater share of shrinking global trade. Yet the competitive devaluations continued.

China left the silver standard in 1934. In 1936, France again devalued the franc. Later that year Italy devalued once more, as did the United Kingdom. Then came devaluations by the Swiss and Dutch. The economic war raged back and forth with nations briefly gaining ground through currency devaluation, then losing it as others devalued in response.

Yet the extreme over-indebtedness that precipitated the process was never really addressed, so the fundamental economic problems only intensified—until Germany invaded Poland in 1939.

That was then. Where are we now?

“Unfortunately, there are parallels to that … period,” writes the Hoisington Quarterly Review and Outlook. “First, there is a global problem with debt and slow growth, and no country is immune. Second, the economic problems now, like then, are more serious and are more apparent outside the United States. However, due to negative income and price effects on our trade balance, foreign problems are transmitting into the U.S. and interacting with underlying structural problems. Third, overindebtedness is rampant today as it was in the 1920s and 1930s. Fourth, competitive currency devaluations are taking place today as they did in the earlier period” (Fourth Quarter, 2014).

Remember, the 2008 sub-prime mortgage crisis and Wall Street meltdown was a debt problem primarily created by ultra-low interest rates set by the Federal Reserve following the 2002 dot-com stock market crash. The current euro crisis is the result of a currency union that enabled Greeks to borrow far beyond their capacity to pay. Japan’s deep economic malaise correlates with the highest national debts per capita of any advanced country in the world.

And when the global economy buckled in 2008, what was the response? Governments and investors simply added more debt. Under the guise of stimulation, the world’s biggest economies enacted the same type of “beggar thy neighbor” economic policies that led to World War ii.

The Federal Reserve slashed interest rates to zero and fired repeated rounds of quantitative easing into the economy, reducing the dollar’s value. Brazil declared “currency war” in return, vowing to defend every last domestic industry from cannibalization by the West. The Bank of England quickly followed the Fed’s bootprints. Then, as Europe’s economic crisis intensified, the European Central Bank opened up with its own quantitative cannons. Then the Bank of Japan launched money bombs of its own.

China is no more or less to blame for the economic warfare than anyone else. But that doesn’t change the media narrative: Just as it was prior to World War ii when countries were denounced for devaluing their currencies to gain competitive advantage—the world’s reaction to China’s recent yuan devaluation continues to intensify.

… some version of the worst-case scenario is almost inevitable if U.S. and world economic leaders fail to learn from the mistakes of their predecessors
Daily Reckoning, Aug. 15, 2014
China is today’s financial kamikaze. There will be others.

As former Pentagon financial warfare consultant James Rickards wrote, “While the outcome of the current currency war is not yet certain, some version of the worst-case scenario is almost inevitable if U.S. and world economic leaders fail to learn from the mistakes of their predecessors” (Daily Reckoning, Aug. 15, 2014).

This dangerous sequence of events is something the Trumpet has been warning about for years. It is something Herbert W. Armstrong famously forecast to millions of people on radio and in print. Throughout his 53-year work, he often described the conditions that would precede the biblically prophesied economic collapse of the United States.

Despite then being the most stable currency in the world, the American dollar would one day be in “jeopardy of being devalued,” he wrote back in 1968 (co-worker letter, March 26, 1968). When the dollar plummets, he warned, inflation will erupt and this will lead to “eventual economic collapse for the United States.”

Based on Bible prophecy, he warned that the beginning of World War iii would be “economic in nature.” About America and Britain in particular, Mr. Armstrong stated: “God prophesied a virtual trade war will get under way against the United States and Britain—and [that] our national economics will falter, and then collapse!” (ibid; emphasis added).

Over and over, Mr. Armstrong warned about the connection between trade war and world war. As far back as 1960, he said that trade war would be the first blow of the biblically prophesied nuclear World War iii.

In a 1971 Plain Truth magazine article titled “Trade War Looming to Trigger World War iii,” Mr. Armstrong warned that American businesses were increasingly moving operations to Asia due to greedy union demands. He warned that the result would be the erosion of good-paying jobs and economic decline. He said political pressure would inevitably build to “start raising high tariff barriers against other countries” (March 1971).

But if we engaged in the drastic protectionist policies needed to protect America’s high-cost labor, he warned, in time it would inevitably trigger nuclear war.

Mr. Armstrong based those predictions on prophecies in Ezekiel 7, Deuteronomy 28 and elsewhere. He said the siege God prophesied in Deuteronomy 28:52 symbolized America’s economy being battered by competition from foreign powers.

Trumpet editor in chief Gerald Flurry wrote about this in our December 2014 issue: “America’s enemies are going to cause economic problems and bring on destruction in many ways ‘until thy high and fenced walls come down, wherein thou trustedst, throughout all thy land: and he shall besiege thee in all thy gates throughout all thy land, which the Lord thy God hath given thee’ (verse 52). The real pressure is coming from without. ‘In all thy gates’ refers to a trade war. The enemies of America, Britain and the Jews will attack their currencies, their financial markets, and their economic might.”

Fast-forward to today. That prophesied worldwide trade war has begun.

As history and prophecy both show, world war is next.

From The October 2015 Philadelphia Trumpet
View Issue FREE Subscription
Next