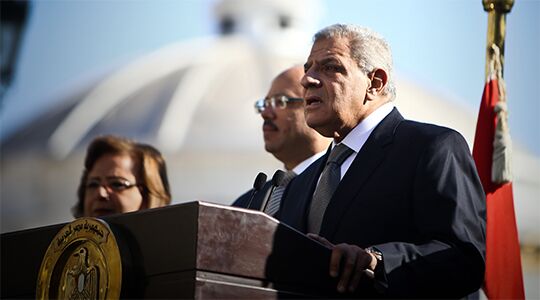 The Islamists in Egypt are set for a dramatic comeback!

With the Middle East abuzz with news of a nuclear deal with Iran, attention is being drawn away from other seismological shifts in the Middle East. The rumblings of one such move are emanating from Egypt. Few realize it, but as Egyptian Prime Minister Ibrahim Mahlab announced to the Egyptian cabinet last Wednesday, “Egypt is in a real state of war.”

This volatile environment is the result of major upheavals in Egyptian geopolitics in recent years. In 2011, Egypt’s strongman president, Hosni Mubarak, was overthrown in the “Arab Spring.” What followed was a United States-endorsed “democratic” election. By June 2012, Mohamed Morsi, a Muslim Brotherhood candidate, was sworn in as Egypt’s president. He led a crackdown on the military, imposed all sorts of Islamist laws and dictates, and established himself as a radical pharaoh over the nation. Persecution of minorities intensified. Rivals were crucified outside the presidential headquarters and women were brazenly assaulted while protesting in Tahrir Square. All the while, the economy spiraled and a humanitarian crisis loomed.

It was only after massive protests that a July 2013 military coup swept in, stripping Morsi and his henchmen from office.

One year after coup number two, Abdel Fatah al-Sisi, the head of Egypt’s military, was elected as president. So began the backlash against Islamists in Egypt. Since then, reports indicate at least 1,400 have been killed and thousands more jailed by security forces.

Under his presidency, Sisi has declared war on the Muslim Brotherhood and other extremist elements within the nation. Some accuse the current administration of wielding a heavy hand. Many of those men behind bars await the death penalty—including Mohamed Morsi.

As a result of the crackdown, tensions between Islamists and Sisi’s government—including the military—are extremely high.

Egypt is experiencing regular terrorist attacks. And it is not just the lingering presence of the Muslim Brotherhood. More recently, terrorist groups associated with Islamic State have stepped up their activity in Egypt, particularly the Sinai Peninsula.

The intensity seems to be increasing.

On Monday, June 29, a bomb was detonated in a busy Cairo suburb, killing Egypt’s prosecutor general, Hisham Barakat. The car bomb struck shortly after the state prosecutor left his house on his way to work. The attack is most likely linked to a number of recent high-level sentences delivered to Muslim Brotherhood members, including Morsi.

The title of the Christian Science Monitor’s June 29 article was “With Cairo Assassination, Egypt’s Cycle of Violence Turns Darker.” It wrote:

Two years since the coup, Egypt has become a far darker and more paranoid place than it has been for decades. Amid a struggling economy and an effort to quell the protest culture that briefly flourished in 2011 and saw long-standing dictator President Hosni Mubarak ushered from power, political repression has become widespread. …The country is certainly witnessing a period of violence and upheaval not seen at least since the 1980s …. Almost all close observers of Egypt are now predicting another wave of repression in response to Barakat’s murder, that will be at least as indiscriminate as those of the recent past.

But the week of attacks didn’t stop there.

The militant attacks sparked the fiercest clashes in the peninsula in decades. An Islamic State affiliate claimed responsibility for some of the attacks, saying fighters targeted 15 army and police positions. Militants staged three suicide bombings, hitting two checkpoints and one officers’ club.

While Sisi did his best to alleviate fears of a resurgent terrorist presence, he cannot mask the fact that hundreds of Egyptian police and soldiers have been killed in the Sinai since Morsi was overthrown.

But the latest was the largest coordinated attack by this group yet. Egyptian Armed Forces announced that 17 Egyptians soldiers were killed and 13 were wounded in the fighting. Approximately 100 jihadists were also killed.

What is troubling Egypt more is the fact that the terrorists are not content to camp out in the deserts of the Sinai. Islamists are also targeting some of Egypt’s most popular tourist destinations.

Sites such as Luxor are some of Egypt’s greatest draw-cards. In June, police barely averted an assault on tourists visiting the Karnack temple complex. The terrorists were sitting in a café, waiting for a group of tourists to come in when a gunfight with police broke out. The attack was only thwarted when a taxi driver alerted police to the terrorists’ suspicious behavior.

With the terrorists’ abilities growing, and such a thin margin between prevention and accomplishment of an attack, it seems only a matter of time before one of these terror groups is successful.

Recent terrorist attacks in Tunisia should be a powerful omen to the embattled administration.

Tourism is Egypt’s Achilles heel. The nation relies heavily on the flow of tourists as a source of income. In the desolate regions of the Upper Nile, there are few draw-cards aside from the ancient ruins. These are the sites now being targeted by terrorists.

The destruction by Islamist terrorists of the tourism industries of North African and Middle Eastern countries is an effective means of destabilizing the governments, damaging the economies, and creating social chaos.

In Libya, for instance, the nation has lost millions of dollars worth of tourist income. Tunisia stands to lose millions after the recent beachside bloodbath. Egypt could well be next should the tourist industry continue to be targeted.

These financial losses place burdens on governments and create opportunity for the Islamists.

One group that has taken a strong backhand by Sisi’s government is the Gaza-based group, Hamas. It is little wonder then that Hamas has been playing a role in the recent bloodshed in the region. The Times of Israel reported:

The idf (Israel Defense Forces) has acquired intelligence that Hamas is providing weaponry and other support to the Islamic State’s Sinai affiliate, Wilayat Sinai, the group thought to be behind Wednesday’s deadly attack on Egyptian security services, a top Israeli officer said Thursday.

The coordinator of government activities in the territories, Maj. Gen. Yoav Mordechai, told the Arabic-language news network Al Jazeera that along with military support, Hamas has also been providing medical support to injured Islamic State operatives.

Both the Brotherhood and the Islamic State would love to see the collapse of the current regime and the establishment of an Islamist state. For Hamas, it would mean the reopening of its southern border. Under Sisi, Gaza’s extensive tunnel operations have been severely crippled, weakening the government. The black-market trade is a vital lifeline for Hamas to receive cash, goods and weaponry. Thus the goals of Hamas, the Muslim Brotherhood and the Islamic State are all lining up, and it spells disaster for the government of Sisi.

It isn’t only Sisi that is worried. The success of this week’s attacks has Israel scrambling as well. Yossi Melman wrote in the Jerusalem Post:

The honest truth, as of now, is that Egypt is not succeeding in its war on terror. This raises difficult questions about the Egyptian Army’s operational capabilities, its lack of sufficient intel-gathering abilities, and perhaps even worse—its helplessness and negligence ….

Despite the security concerns, Israel has allowed Egypt to maintain unprecedented military power in the historically demilitarized Sinai. But regardless, the terrorist attacks have kept coming. Israel already has radical Islam crouching on its northern border. The last thing it wants is a strong, revitalized radical Islamic movement to the south. The terrorists have attacked Israel from the Sinai in the past, and the close proximity to the port city of Eilat provides a clear target.

Where Egypt Is Headed

Sadly, it’s inevitable that what happened in Tunisia is coming to Egypt. The terrorists are trying time and time again to destabilize and bring down the government. The military cannot stop every attack. One of these terrorist plots on Luxor, or the Great Pyramids, is going to be successful.

Egypt may have one of the largest fighting forces in the Middle East, but it is an army that is prepared for conventional warfare. Its weaponry is U.S.-supplied planes and tanks, state-of-the-art weaponry wielded by well-trained soldiers.

But the problem is, it is not fighting a conventional war. The terrorist cells Sisi faces are small, mobile and covert. Hindering Egypt further is the battlefield. The Sinai Peninsula is over 23,000 square miles of arid desert. Finding the terrorists is hard enough, let alone engaging them.

Purging Islamist terrorists from Egypt is no easy task—it may be an impossible one.

The forecast ahead is grim. Sisi faces a long, drawn-out battle to purge the Sinai. And all the while, the terrorists will have opportunity to strike back at the tourist industry and seize upon other means of destabilizing the nation.

And the government will topple. The Trumpet has long forecast Egypt’s return to radical rulership. Even when Morsi was removed from office, the Trumpet said that Egypt would turn back to radicalism. We can speak with such assurance because it is prophesied in your Bible! As a part of the king of the South alliance—a combine of extremist Islamic nations led by Shiite Iran—Egypt is specifically named! Read it for yourself in Daniel 11:40-42. Here Egypt’s fate is discussed alongside that of the remaining members of the king of the South.

If this radical alliance is to come about, Egypt must again fall to the Islamists. And when you look at Libya or Tunisia, it is not too hard to see how!

While the most exact details on how this will transpire are unclear, there is no denying that we can see the seeds of this transformation being sown. Remember, Egypt’s current government and its prime minister have told the world that Egypt is at war.

We expect the most radical elements within Egypt to assume control and directly ally themselves with Iran. This worst-case scenario for the U.S. is just what the Bible prophesied will occur soon. We know the radical Islamic movement in Egypt will certainly have a lot of influence in Egyptian politics; and it’s going to swing that nation toward Iran.

Ultimately, that means bad news for Egypt because of the final outcome that is discussed in Daniel 11. Keep an eye on Egypt. Keep an eye on the terrorists in the Sinai. The nation is at war, and we can expect the Islamists to make a major comeback soon!