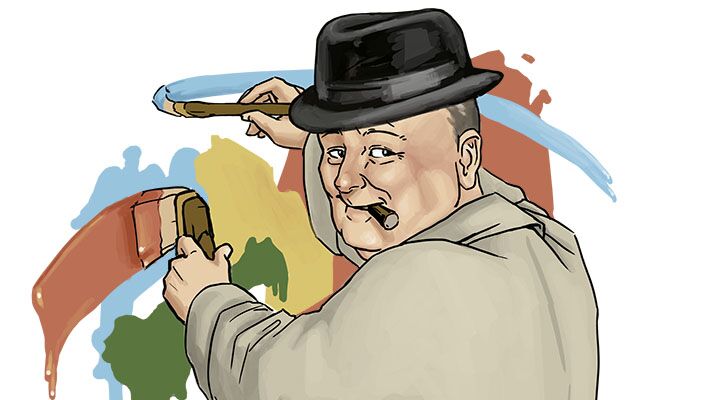 Last December, the heirs of Winston Churchill in the United Kingdom sold one of his paintings for £1.8 million (us$2.8 million), nearly double the record for a Churchill painting. It was a simple landscape of the fishpond at his home. It was called “The Goldfish Pool at Chartwell.”

Winston Churchill took up painting when he was 41 years old. Because of his long life, he was able to paint for more than 45 years. In that time, he completed at least 539 paintings—an average of about one painting per month. Not bad for someone who also published more words than William Shakespeare and Charles Dickens combined, served in armed combat on four different continents, and occupied every great office of state in the United Kingdom, including prime minister on two occasions.

Churchill later commented on his first experience with painting. “So very gingerly I mixed a little blue paint in the palette with a very small brush, and then with infinite precaution made a mark about as big as a bean upon the affronted snow-white shield. It was a challenge, a deliberate challenge; but so subdued, so halting, indeed so cataleptic, that it deserved no response. At that moment the loud approaching sound of a motorcar was heard in the drive. From this chariot there stepped swiftly and lightly none other than the gifted wife of Sir John Lavery. ‘Painting! But what are you hesitating about? Let me have a brush, the big one.’ Splash into the turpentine, wallop into the blue and the white, frantic flourish on the palette, clean no longer, and then several large, fierce strokes and slashes of blue on the absolutely cowering canvas. Anyone could see that it could not hit back. No evil fate avenged the jaunty violence. The canvas grinned in helplessness before me. The spell was broken. The sickly inhibitions rolled away. I seized the largest brush and fell upon my victim with berserk fury. I have never felt any awe of a canvas since.”

Churchill had to learn to reject fear of failure and just dive into the task. He would never have been so prolific had he not been willing to make some errant strokes, a number of mistakes and even a few failures.

Churchill’s experience with painting highlights the truth of this proverb: “For a just man falleth seven times, and riseth up again: but the wicked shall fall into mischief” (Proverbs 24:16).

All of us are going to make mistakes and fail at times. Every great individual of history has done so. The important thing is what happens after the fall.

The Bible itself is full of people who experienced failure: The great patriarch Abraham was led astray by his own carnal reasoning when he had a child with Hagar. This was an epic failure that started a bitter sibling rivalry that continues to this day. Moses was on the brink of wearing away before God sent his father-in-law, Jethro, to help save him from distress. Samson had all the tools to be a spectacular leader for God—but he couldn’t rule his own spirit until he learned to faithfully trust God at the very end of his life. David committed adultery and murder! Peter betrayed Jesus Christ at His most difficult hour. Paul persecuted God’s people and was even complicit in killing them.

They all failed. But that did not make them failures!

All of us are going to make mistakes and fail at times. Every great individual of history has done so. The important thing is what happens after the fall.
“Nine in 10, at least once or twice in a lifetime, come to the place where they appear to be totally defeated!” wrote Herbert W. Armstrong in The Seven Laws of Success. “All is lost!—apparently, that is. They give up and quit, when just a little more determined hanging on, just a little more faith and perseverance—just a little more stick-to-itiveness would have turned apparent certain failure into glorious success.”

God isn’t too concerned with our mistakes as long as we learn from those mistakes and develop the character necessary to make permanent changes. He wants us to push through those mistakes, boldly walking forward in faith.

“Now the just shall live by faith: but if any man draw back, my soul shall have no pleasure in him. But we are not of them who draw back unto perdition; but of them that believe to the saving of the soul” (Hebrews 10:38-39). God derives no pleasure from the timid. Instead, God rewards people who step forward and keep moving!

In 1939, the British produced a number of flyers and posters with positive messages to help prepare the people for the onset of war. One of those was, “Keep calm and carry on.” This is what Winston Churchill did against Hitler. This is what the British people did under the Nazi bombshells. This same theme is evident in Churchill’s unceasing dedication to painting.

“People feel drawn to [Churchill’s paintings] not because they are polished masterpieces, but precisely because they are not,” writes Boris Johnson in The Churchill Factor. “He was willing to try it out, to court ridicule, to make mistakes—but the crucial point is that he is at least wiling to throw himself into it and to run that risk. Sometimes it doesn’t work; sometimes it comes off triumphantly. That was the spirit he took with him into that dark and tobacco-filled room in the early summer of 1940. Other hands dithered in front of the blank and terrifying canvas. Churchill took the plunge, loaded up his brush and applied his bright-hued and romantic version of events in broad and vigorous strokes. And that, amigos, is the final rejoinder to all his earnest doubters and critics.”