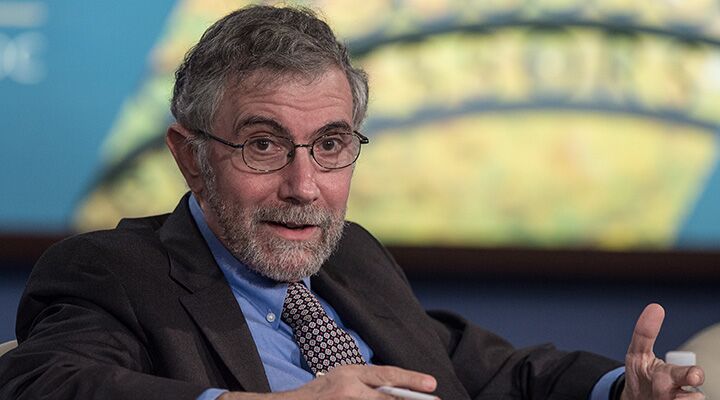 Sometimes smart people are extremely dangerous. Blinded by their own brightness, they can’t see what is right in front of them. That’s the lesson of Job—as in Job of Bible fame. He was so talented, smart and good that he couldn’t see he was guilty of one of the most dangerous sins of all—self-righteousness.

Let me answer that. Yes!

Over the past six years, America’s national debt has risen from $11.1 trillion to $18.1 trillion. That’s a jump of more than 63 percent since the last presidency. For perspective, it took America 227 years (1776 to 2003) to accumulate its first $7 trillion worth of debt.

But adding an additional $21,000 of debt per man, woman and child, on top of the existing $34,000 per person debt load is apparently not enough for Krugman.

Governments don’t have enough debt? They should have more? Is Krugman serious?

When a government engages in deficit spending now, it will have to engage in compensating cutbacks (or increased taxation, which is actually more economically destructive than cutbacks) later, or else its debt will grow beyond its ability to pay.

But according to Krugman, DeLong’s research proves growing debt doesn’t actually mean you will ever have to cut back. “So you can eat your cake and have it too.”

Question: How does this magic happen?

Question: So how do you get this magically growing economy?

Krugman: Borrow and spend more! “A bigger debt lets the government do useful things, like invest in infrastructure; it gives investors the safe assets they want; and it need not lead to any future pain as long as you don’t do foolish things like join a currency union with no well-defined lender of last resort.”

Question: Anybody see a problem here?

Any personal finance adviser will tell you that borrowing money to purchase something that will not produce enough to pay for itself is a great way to get into financial trouble. At the very least, like borrowing money to buy a new vehicle, which is almost guaranteed to devalue by 70 percent after four years, it will make you a lot poorer than you otherwise would be.

Yet somehow Krugman thinks that borrowing money to build more roads, parks and community centers—things that will require even more money for future maintenance—will make America richer. And how many more bridges to nowhere does America need anyway? Krugman even mentions defense spending. He doesn’t explain how spending money on things designed to explode will lead to greater prosperity either.

But ah, dear reader, you miss the point. Remember? We live in a new economic age where you can eat your cake and have it too.

In today’s marvelous Alice-in-Wonderland world, central banks create money out of nothing to give to governments to spend on real things. The government debt bonds simply go back into central bank vaults where they will never see the light of day. And the interest on that debt? It goes to the central bank—which will just turn around and give it back to the government.

See? It’s the new thing: prosperity by button. Push a button. Create some bank account digits. Give it to the government. Spread the wealth … starting at the top. Let it trickle down. Everybody wins. There is no downside.

If you believe that, you might have a future as a popular New York Times economist.

Sadly, it will take a crisis to wake people up. And a crisis is guaranteed because it is the Paul Krugmans of the world who dominate political thinking and monetary policy. Only this time, it will be a lot worse than the last one because debt levels are so much higher.

God let Job go through a lot of pain and punishment to wake him up. He lost his wealth, his health and his children before he realized where he was wrong. How much will America have to go through before it wakes up to what is coming?