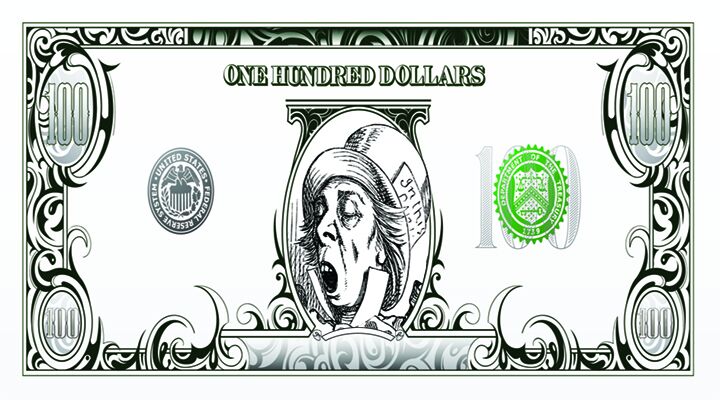 Debt is good, dollar is gold, and stocks only go up—things are getting curiouser and curiouser.

The phrase “mad as a hatter” refers to the 19th-century use of mercuric-nitrate in the making of felt hats. Long-term exposure to mercury caused hatmakers to experience mood swings, tremors and emotional imbalances that made them appear mad.

Trusted relationships have broken down. Fundamental truths appear suspect, and economic laws no longer seem to hold true. In America especially, it’s as if the whole economic system fell down a rabbit hole into a world where up is down, debt is good, and people exuberantly celebrate unbirthday parties every day of the year but one.

“The world of today is not the same world it was 50 years ago,” writes Agora Financial’s Bill Bonner. “We have a new kind of money. We have a new economy. And we have a different kind of government. All have been transformed over the last 40 years in ways that few people have noticed and fewer still have understood” (emphasis added throughout).

Could you cut up your credit card if you had to? Could you make the payments on your car if you lost your job? How many times have you “borrowed” from your 401(k)?

Today, total United States debt is nearly $60 trillion. According to the Federal Reserve, total debt soared by $658 billion during the fourth quarter of 2014 to a record high of $58.7 trillion. Federal government, agency, domestic and mortgage debt are all rising. Corporate debt jumped from $23.5 trillion in 2010 to $36.4 trillion as of 2014. That’s up an astounding 54 percent in less than five years!

Forty-seven percent of Americans save zero dollars or go further into debt each year, according to Deutsche Bank analyst Torsten Sløk.

Credit is everywhere and inexpensive. Debt is now good?

We ate the magic mushroom.

You can trace this nonsense back to 1971, when the dollar became credit-based instead of gold-based. Bankers didn’t like gold-backed money because it is impossible to create more from nothing. In the new system, credit was theoretically unlimited. Dollars could be conjured out of thin air. According to Bonner, “As soon as the new money found its legs, it was off to the races. Credit raced ahead 50 times in about 50 years.”

America hosted a never-ending tea party. People substituted credit cards and bank loans for earnings and savings. They were able to buy more and more stuff they couldn’t afford.

In 2008, when the financial crisis struck, commentators thought consumers had finally eaten one too many cupcakes. It was obvious they couldn’t pay for all their giant houses and gas-guzzling pickup trucks. The housing market collapsed. Wall Street banks went insolvent. General Motors and Chrysler had to be bailed out.

But then something extraordinary happened.

Central banks did something they promised they would never do—because it was potentially so destructive to confidence in their currencies that the whole system might implode. They said they would create “unlimited” amounts of money by fiat to bail out the financial system.

They pumped trillions into the markets to keep the debt bubble inflated. Seven years later, they haven’t stopped. First it was the Federal Reserve, which expanded its balance sheet from a couple hundred billion to almost $4.5 trillion. That is $4.5 trillion created from nothing to buy things like mortgages and U.S. government bonds. For a time, around 95 percent of all mortgages in America were provided via the Fed’s funny money. Then, in October, when the Fed finally said it would stop creating money out of thin air, the money-creating baton was picked up by the Europeans, and then by the Japanese.

The Bank of Japan has created so much money to prop up its markets by buying assets that in September it became the biggest shareholder in the country—owning 1.5 percent of all domestically listed companies. And it plans to triple what it has spent so far. It is also the biggest bond holder in Japan now too.

All the major banks are creating money out of nothing to buy real things—and the world accepts it like it is nothing out of the ordinary.

Just another day in Wonderland.

But the money-printing mercury has poisoned the feedback loops. It is distorting the economic indicators.

For example: In times past, investors bought stocks when the economic outlook was improving. The extra demand pushed up the price of stocks. Contrariwise, when economies deteriorated, companies earned less, making them less valuable—pushing markets down.

But today stocks go up when bad news hits the wires.

Bad news increases the odds that the Federal Reserve will suppress interest rates. Consumers will therefore, theoretically, have greater access to debt and spend more. Investors pile in to stocks. The market goes up.

And when positive news is released, a stronger-than-expected jobs report for example, the stock market, more often than not, falls. Investors worry the Fed will cut off the funny money.

Then there is the bond market. Over the past seven years, central banks created so much money to lend to their respective governments that for the first time in history we live in a world of negative interest rates.

What are negative interest rates? That’s when investors pay the government for the privilege of lending it money.

Impossible, you say? Investors would never do it!

Alice laughed: “There’s no use trying [to] believe impossible things.”

“I daresay you haven’t had much practice,” retorted the Red Queen. “When I was your age, I always did it for half-an-hour a day. Why, sometimes I’ve believed as many as six impossible things before breakfast.”

You might be tempted to side with Alice. Who in his right mind would buy a government bond knowing he will only get a portion back? Yet the European Central Bank has cut its rates to -0.2 percent. Denmark, Sweden, Switzerland, Japan and Germany all have negative interest rates. In these countries, as a depositor, you pay interest to the bank.

It’s an upside-down world. “Negative interest rates are a weird and alarming symptom of profound economic dysfunction,” Forbes’s Mark Hendrickson wrote on March 6. “In a healthy economy, interest rates coordinate production between the present and the future according to people’s composite time preferences. Today, those vitally important market signals are mangled, broken, shattered.”

These investors appear to think an economic crash is on the way. They are willing to accept a small known loss as the alternative to what could be much greater losses in other investments.

In America, interest rates are not yet negative, but they are about as close as you can get. The Federal Reserve’s rate is currently set between zero and 0.25 percent. But here again, the bigger point is that central bank interference has warped market signals and is causing massive distortions.

The biggest distortion of which is probably the soaring value of the U.S. dollar.

The U.S. dollar index, which tracks the dollar’s strength against a basket of major currencies, hit a 12-year high on March 13. It has risen nine consecutive months—the longest streak since record-keeping began.

Even more impressive is the pace of its rise. According to Citigroup, it is rising at its fastest pace in 40 years. Over the past eight months, it has strengthened dramatically against every single major currency in the world. It is up more than 14 percent since January alone—a huge move for the world’s most used currency.

“Speed does matter,” says Steven Englander at Citi. “What’s going to stop the dollar from continuing to make these gains?”

The charts say the dollar will rise at least another 10 percent some analysts claim. Some predict another 20 percent rise or more.

Hey, why stop there? Why not 50 percent? A double by Independence Day! Surely it can be found in the charts.

You might think a strengthening dollar is a good thing, but remember, you live in Wonderland now.

The dollar’s value used to be a sort of scorecard measuring the economic health of the nation. When America did well, producing and selling more goods and products to the world, the dollar’s value would rise. When it ran trade deficits, importing more than it exported, the dollar would weaken.

Not so anymore. America’s manufacturers struggle to survive. In January, the U.S. trade deficit was $41.8 billion, down from $45.6 billion in December. Both imports and exports fell due to trade shrinkage.

It is indicative of a world on the brink of crisis.

Take a look around. Europe is leaderless. Greece threatens to destroy the euro. The Japanese central bank is counterfeiting money at a rate that makes the Federal Reserve seem conservative. Russia, Canada and Australia are being pummeled by low oil and commodity prices. China has a debt bubble that may rival America’s. Iran is on the way to nuclear weapons. The Saudis, Egyptians and Jordanians say they want whatever Iran gets. Brazil and South Africa are facing massive budget issues of their own. Argentina and Venezuela face hyperinflation.

In some ways, America could look like an island of sanity in an insane world. But don’t be deceived. As you have already guessed, in Alice’s land, nothing is what it appears.

Why is the dollar rising in value? Mostly because it is the best-looking street in a crummy neighborhood. If you prefer: It is the healthiest horse in the glue factory. Some might say it has the seat with the best view on the Titanic.

That’s all nonsense of course.

The negative interest rates are luring savers, pension fund holders and other investors into alternative markets. Hence, in America, house prices in many areas are back to their old highs and stock markets are at records—even as corporate profits struggle and companies and consumers hold record debt. Meanwhile, the job market is anemic, wages are back at levels first seen a decade ago, and the rich are becoming richer while the middle and poorer classes are becoming poorer. Near record numbers of Americans are on food stamps and government assistance, and the federal government’s ability to aid them diminishes in proportion to the increase in its debt load.

But wait. Didn’t you hear? According to the Week Magazine, “Fed hints at June interest rate hike amid improving economy.” And Bloomberg: “Wedding Budgets at $31,213 Show Improving U.S. Economy.”

Is that good news or bad news for America’s Wonderland economy? Does anyone know?

The clearest thing I see is Alice got her wish. We increasingly live in a world void of logic.

The economy may look well dressed, and the headlines may say so, but underneath the coat and top hat is a mercury-poisoned mad hatter dancing a gleeful futterwacken that can only end one way.

With a masterful flop.