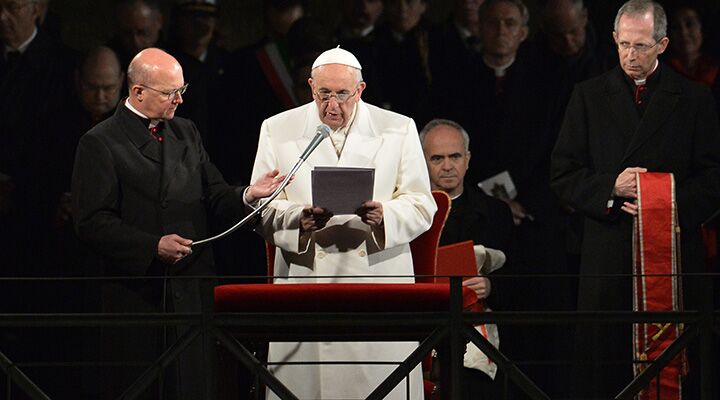 Western people and institutions could do more to prevent the slaughter of Christians, a Vatican cleric implied on the day after al-Shabaab’s Muslim militants besieged a university in Garissa, Kenya, and discriminately killed Christians.

“We risk, all of us, the institutions and the people of the Western world, to be Pontius Pilate who wash their hands of [these events],” warned Raniero Cantalamessa, the Vatican’s preacher of the pontifical household. Speaking during the Vatican’s Good Friday service in Rome, Cantalamessa referenced the early first-century Roman procurator who failed to use his authority to prevent the crucifixion of Jesus Christ, and urged people not to “ignore that in many countries [Christians] are the most frequently targeted victims.”

We risk, all of us, the institutions and the people of the Western world, to be Pontius Pilate who wash their hands of [these events].
Vatican preacher of the pontifical household Raniero Cantalamessa
Pope Francis was in Cantalamessa’s audience.

In a later Good Friday ceremony, the pope echoed similar concerns. He bemoaned, “We still see today our persecuted brothers, decapitated and crucified for their faith in [Jesus Christ], before our eyes and often with our complicit silence.”

On Thursday, the al Qaeda-linked, Islamic al-Shabaab militant group stormed Garissa University and killed nearly 150 people. The attack became one of the worst school shootings ever. The militants laid siege on the university for 15 hours, during which they separated Muslims from Christians. As was the case with the Westgate Mall attack in Nairobi, Kenya, in 2013, the Christians were killed and some of the Muslims were spared.

Somali-based al-Shabaab has attacked Kenya for militarily aiding the government of neighboring Somalia in its fight against Islamist insurgents in that country.

Until the Westgate Mall attack, al-Shabaab’s grievances against Kenya were purely political and indiscriminate. A religious element has since been introduced to its attacks, following criticisms from fellow Muslims. Al-Shabaab’s grievances are now both political and religiously discriminate. In addition to its typical political gripes, al-Shabaab claimed that its Garissa attack was also revenge for the ill treatment of Kenya’s minority Muslim population—10 percent of the country’s 44 million populace.

Following the siege at Garissa, al-Shabaab warned: “No amount of precaution or safety measures will be able to guarantee your safety, thwart another attack or prevent another bloodbath from occurring in your cities.” Kenyan cities, said the Islamists, “will run red with blood.”

While Kenya has declared war on the militants, that confrontation will not be easy. Kenyan President Uhuru Kenyatta acknowledged that his nation’s “task of countering terrorism has been made all the more difficult by the fact that the planners and financiers of this brutality are deeply embedded in our communities.” As part of the solution, Kenyatta called on Kenya’s Muslims to help prevent radicalization.

Kenyan cities, said the Islamists, “will run red with blood.”
Religiously motivated conflict in Kenya and elsewhere is such a complex problem that the Vatican is calling on more people and institutions not only to help prevent radicalization in the first place, but also to prevent its violent manifestations. The Vatican is warning people about the consequences of “complicit silence” and acting like Pontius Pilate toward attacks like al-Shabaab’s.

In a message on Monday, Pope Francis added some historical context: “These are our martyrs of today, and they are many. We can say that there are more of them now than there were in the early centuries. I hope the international community does not look on, mute and inert, at such an unacceptable crime.”

The history of the Roman Catholic Church’s crusades reminds us of the Vatican’s tendency to address its religious grievances politically and militarily—either directly or via proxies.

The Catholic Church’s penchant for military expeditions against Muslims (and other antagonists), and radical Islam’s seemingly unstoppable barbarism, will inevitably lead to yet another crusade.

Bible prophecy informs us that it will be the last “holy” war that Catholics and Muslims will ever fight. To understand why that is such good news, read Trumpet editor in chief Gerald Flurry’s article “The Last Crusade.”