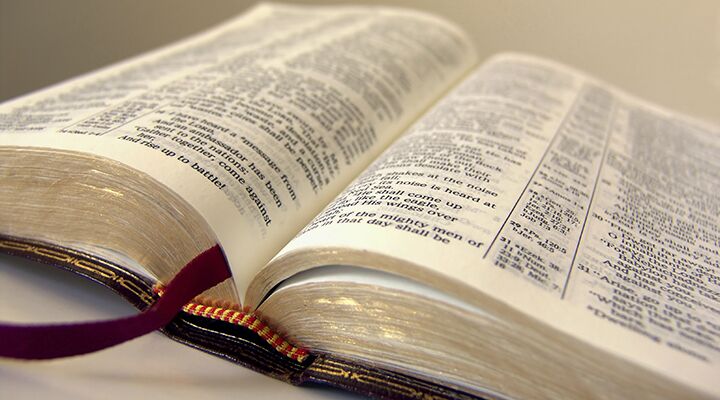 Throughout the ages, a lot of people have said they believe the Bible. Are you part of that group? Did you know one third of this holy book consists of prophecy?

The most-read book in world history is largely prophecy, a concept you might associate more with apocalyptic movies, mystical books and crazy street preachers, and not with serious thought.

Consider the Bible’s table of contents. Out of the 66 books, 18 are named after prophets. Other books contain numerous prophecies. Matthew, for example, contains the Olivet prophecy, which talks about the four horsemen. Genesis contains prophecies about Israel inheriting the Promised Land. 1 Samuel contains prophecies of Jesus Christ and His reign over the Earth. And who can forget the book of Revelation, which is essentially a book about prophecy?

If Bible prophecy is true, especially if it’s true time after time after time without a miss, then an objective mind has to admit: Someone with God-level powers must have inspired the Holy Bible.
A lot of intelligent people believe in God. Many of them even give the Bible a serious reading. But when this book claims to predict the future, many people reject it outright or skip over to the part about the love of Jesus.

But Jesus Himself was a prophet. So any honest reading of the Holy Bible has to answer this unavoidable question: Is Bible prophecy real?

This magazine takes the whole Bible, including prophecy, and applies it to world events. Few other media use Bible prophecy as a criterion for anything. That sounds outlandish to them.

Have you ever looked into Bible prophecy? Really studied it? If this Book of books predicts that a certain nation will be ruled by a certain administration and will experience a certain fate—and then all of those things happen—that changes everything. If Bible prophecy is true, especially if it’s true time after time after time without a miss, then an objective mind has to admit: Someone with God-level powers must have inspired the Holy Bible.

Fulfilled prophecy proves that the Bible is God’s Word. The only question is, has Bible prophecy been fulfilled?

You need to take an honest look at all the facts and prove whether Bible prophecy is real or if it’s a strange collection of wild ideas.

A Message for Today

Prophecy is a more serious and reasoned subject than you might initially perceive. Although the Bible encodes it rather than listing it out like a textbook, it is designed to be understood by those to whom God reveals it.

Bible prophecy was written in ancient lifetimes using ancient names for the predecessors of modern nations. One of these ancient identities unlocks prophecy, because every Old and New Testament prophecy revolves around it in some way: the nation of Israel. You can examine the modern identity of ancient Israel by requesting a free copy of our book The United States and Britain in Prophecy (or read our article “America’s Lost Identity”).

If God is real, and if the Bible is His Word, and if God preserved numerous prophecies for us today, then there is definitely a message in those prophecies we need to understand. And God does make that understanding available! If you want to prove Bible prophecy for yourself, request a free copy of History and Prophecy of the Middle East. This booklet proves one of the most detailed and wide-ranging prophecies in the Bible. It’s completely free; you have nothing to lose.

Just the word “prophecy” evokes images of doomsday quacks and conspiracy theorists or, at best, shamans who can mysteriously predict or control the future through a blend of practicing mystical arts, studying the stars and/or divining the secrets of ancient books.

But read the Bible, and you’ll see what the prophets were like. They weren’t charlatans, nor were they born into some prophet caste. Many of them didn’t even want the job. “For the prophecy came not in old time by the will of man: but holy men of God spake as they were moved by the Holy [Spirit]” (2 Peter 1:21).

Moses and Isaiah both protested being used as prophets. Ezekiel was a slave; Daniel was a captive-turned-high-official; Jeremiah was a young priest; Amos was a herdsman. Jonah outright ran away from the job at first. The one common factor among the dozens of prophets in the Bible is that God drafted them and commissioned them to deliver a message.

The Old Testament word for prophet is nabi, which means “one who announces or brings a message from God.” Biblical prophets often delivered unpopular messages drawing significant persecution. Sometimes it even cost them their lives.

Is Bible prophecy true? If it was invented by an assortment of street-corner doomsday preachers—or even by the most intelligent men in history—you could dismiss the concept entirely. No human being can predict the future. But if it was delivered by a range of individuals whose only significant commonality was that they obeyed a higher power, then the subject bears more scrutiny.

2. Bible prophecy is for old times

According to the Bible, prophets received messages from God and then delivered those messages orally or recorded them—often both. But if they finished the job by delivering the message, why write it down? Why have those messages been preserved for millennia?

It’s not just because these are historical case studies in which inspired men said that something would happen and then it did. There’s another, much more important reason these books were preserved.

A closer look at some of the prophets shows that their prophecies were aimed at a later period, far beyond their lifetimes. For example, the Bible says God gave Ezekiel prophecies about the house of Israel. But Israel had already been conquered and carried away captive by Assyria over 100 years prior. Ezekiel himself was a Jewish captive in Babylon. He never delivered his message to Israel. Why did God give him the message then?

The Bible provides the answer: It is because the prophecy remains to be fulfilled. This would mean God wrote and preserved advance news not only for the ancients, but for current world news! Revelation 1:1 claims that this is exactly the case. Daniel 12:9 specifically says that prophecy is for “the time of the end.” If the Bible is true, many prophecies are so much more than ancient predictions that have come and gone. If you piece them all together, the picture that emerges is that they are, in fact, advance warnings of what will happen in our lifetimes!

The third misconception is the one that pops immediately to many people’s minds when they hear the word prophecy. They envision the state of affairs when prophecies actually do come true: mass destruction. There is a reason for this—but is a heads-up for doomsday the only reason for Bible prophecy?

The Bible predicts the rise and fall of nations and empires. It does specify that many of these falls have been and will be catastrophic. The God of the Bible also prophesies that people will experience terrible personal and national punishments for disobeying and sinning against Him. And yes, Armageddon is in the Bible.

But even Armageddon is part of a larger prophecy. When you read what the Bible actually says, you find that the greatest prophecy of all is the advance news of the soon-coming Kingdom of God! God will govern a civilization of peace, happiness, joy and prosperity for those who embrace a relationship with their Creator. Even the events surrounding Armageddon are corrective steps to save humanity from satanic sinfulness and self-destruction.

The Bible actually presents prophecy as an advance chronicle of a great plan God is working out. Although it involves discipline and punishment, the purpose of that plan is ultimately to bring humanity peace and joy so it can reach its fullest potential.