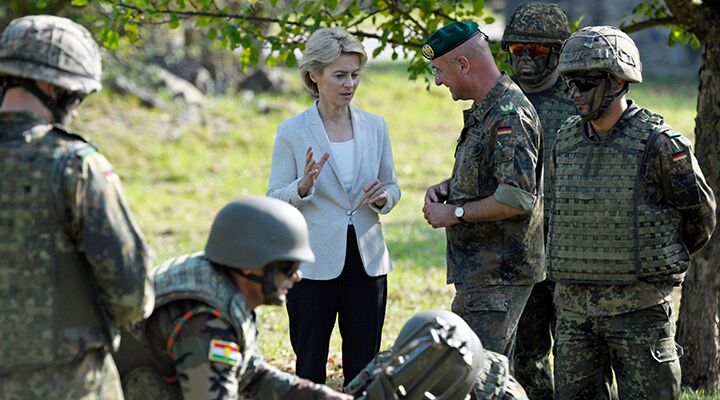 A status quo Germany has maintained for almost 60 years is changing in response to modern-day security challenges.

Ever since World War ii, Germany’s military missions abroad have been executed under a United Nations or nato mandate—until now.

The crisis in Iraq is compelling the German government to implement drastic changes in its military policy on foreign deployment. The German cabinet agreed Wednesday to send over 100 troops to Irbil, in northern Iraq, to train Kurdish Peshmerga fighters. If finalized, the plan would be Germany’s first major military deployment without any authorization from the United Nations or nato.

The German cabinet agreed Wednesday to send over 100 troops to Irbil, in northern Iraq, to train Kurdish Peshmerga fighters.
The Peshmerga are arguably the most competent ground force fighting the scourge of Islamic State terrorists in Iraq.

Germany plans to train the Peshmerga in minesweeping and in the use of specialized weapons and telecommunications equipment. If everything proceeds according to plan, the troop deployment will take place early 2015.

The proposal will be taken to Germany’s parliament, the Bundestag, in January for a vote for authorization, and it’s likely to pass because of the current government’s majority representation in the Bundestag. But the plan is such a major change in policy that it might also require a change in the German constitution.

The constitution of post-World War ii Germany strictly restricted it from any military advancement that could be used to execute foreign policy. That is because Germany was responsible for starting both world wars. Taking a lesson from history, President Franklin Roosevelt and Prime Minister Winston Churchill jointly declared in February 1945:

It is our inflexible purpose to destroy German militarism and Nazism and to ensure that Germany will never again be able to disturb the peace of the world. We are determined to disarm and disband all German armed forces; break up for all time the German General Staff that has repeatedly contrived the resurgence of German militarism; remove or destroy all German military equipment; eliminate or control all German industry that could be used for military production. … It is not our purpose to destroy the people of Germany, but only when Nazism and militarism have been extirpated will there be hope for a decent life for Germans and a place for them in the comity of nations.

Germany’s belligerent history is the reason its post-World War ii army operated under strict constitutional restraints from foreign military operation. In recent years, some of those restraints were loosened when Germany beefed up its army and became militarily involved in the Balkans, Afghanistan, Uzbekistan, Turkey, Mali, Sudan, South Sudan, Uganda, the Democratic Republic of Congo, Djibouti and Somalia, among other places.

As troubling and controversial as some of those instances were, Germany participated in them only under an international mandate from the United Nations or nato.

Not so this time around.

Many law experts believe the proposed plan to send troops to Iraq will violate Germany’s Basic Law, hence the likelihood of the plan necessitating a change in the constitution. But Germany’s cabinet is advancing it regardless.

Germany is also pushing through this plan in spite of its military budget constraints and the embarrassing challenges it faced when it sent arms to Iraq in September. As the Trumpet’s Richard Palmer wrote in “Germany’s Embarrassing Failures Prompt Military Spending Debate,” such failures were an indication of how Germany was straining from the responsibilities granted it by American disengagement from conflict zones. It also indicated how much Germany needed to increase its military spending, and with it, its military operations.

But even that shipment of arms in September was deemed by some law experts as unconstitutional. The shipment of arms is prohibited under German law, as the Wall Street Journal explained. The only exception is when Germany’s national security and foreign interests are at risk—hardly the case if you consider the short-term implications of its involvement in Irbil. Germany justified that shipment with an argument similar to Steinmeier’s: The sheer barbarism of Islamic State terrorists has got to be stopped, somehow.

The shipment of arms in September was deemed by some law experts as unconstitutional.
The Trumpet and its predecessor, the Plain Truth, have declared for decades that Germany is destined to rise above any constitutional restraints or public opinions and remilitarize on an unprecedented scale. The Plain Truth’s founder and editor in chief, Herbert W. Armstrong, declared that such a development would occur even when most of Germany had been reduced to rubble toward the end of World War ii. He continued saying that even when two of the world’s most powerful leaders had vowed that they would not allow Germany to rise as a military power ever again.

Mr. Armstrong based all of his analysis on Bible prophecy.

The Bible shows that Germany will lead a powerful European empire, which, among other conquests, will destroy radical Islam. Daniel 11:40 describes it as a blitzkrieg, whirlwind attack from the king of the north against the king of the south. For more understanding on this subject, read “The Whirlwind Prophecy.” Also, consider requesting our free booklet highlighting Mr. Armstrong’s five-decade track record of accurate Bible-based geopolitical forecasting, He Was Right.