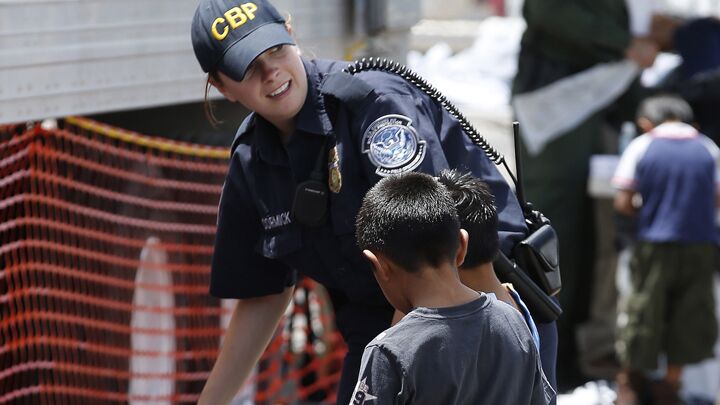 America’s Border Patrol isn’t what it used to be.

Unfortunately, once you become a Border Patrol agent, the job description changes.

In 2012, U.S. President Barack Obama, by executive fiat, enacted the Deferred Action for Childhood Arrivals (daca) program. This plan gave temporary amnesty and work permits to illegal immigrant children. It resulted in a massive stampede of illegal minors attempting to get into the United States.

It is estimated that 90,000 unaccompanied immigrant minors will enter the U.S. by the end of the year. No one knows exactly what to do with the masses of parentless, hungry, dirty and sometimes sick children. Enter Border Patrol.

Imagine: You’ve gone through training; laid your life on the line to secure America’s borders; been shot at (perhaps by American guns smuggled into Mexico); and now you are being asked to change diapers and make sure children are eating their vegetables.

Border Patrol agent or babysitter: Which is it?

Are you saying that because the brave men and women of the Border Patrol are being overwhelmed and taken off their post to attend to the children and teenagers who are coming across the border, that the bad guys, the drug runners, the cartels, the criminals, are able to slip in?

Garza’s reply: “That is correct, sir.”

Isn’t that the duty of the Border Patrol, to keep these sorts of people out? Garza estimates that “at least 70 percent of our Border Patrol manpower is not patrolling the border” (ibid).

At least 70 percent of our border patrol manpower is not patrolling the border.
Hector Garza, spokesman for the Laredo Border Patrol Union
In 2010, Border Patrol agent Jesus Mesa said teenagers throwing rocks from the Mexican side of the border attacked him. Mesa shot and killed one of the teens, Sergio Adrian Hernandez Guereca. As Fox News reported, “Border Patrol agents are allowed to shoot at rock throwers if they feel their lives or those in their custody are at risk.” The family wanted to sue Mesa through U.S. courts, but were denied because the shootings occurred in Mexico.

However, a June 30 ruling from the Fifth U.S. Circuit Court of Appeals says the family can, in fact, sue Mesa over the shooting. It ruled that “victims” of this nature do have U.S. constitutional rights.

If you are a border agent, how do you respond?

These agents face an impossible task—one made exponentially more difficult by American politicians’ desire for open borders. This is why America’s protectors have become a babysitting service. To learn more, read “Illegal Immigrants Swamping America.”