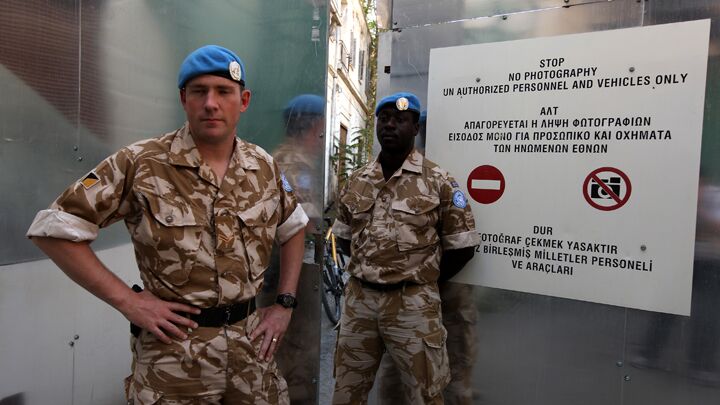 The discovery of large gas deposits in the eastern Mediterranean may heal Cyprus’s 55-year rift.

Pushed into action by Russia’s takeover of Crimea, the European Union and the United States are increasing diplomatic efforts to reunify the eastern Mediterranean island of Cyprus. Propelling their efforts forward is the discovery of two large natural gas deposits that, if tapped and transported into Europe, could reduce the EU’s dependence on Russian fuels.

The second, the Aphrodite field, was discovered in late 2011, north of Leviathan and within the Economic Exclusive Zone of Cyprus. While the Aphrodite reserve is not as large as Leviathan, unlocking it will still provide much-needed stimulus to Cyprus’s crippled economy for years to come.

However, for Cyprus and Israel to derive any economic benefit from their large gas resources, they must be brought to market. And this is where the Cypriot reunification comes in.

For the past 40 years, Cyprus has been divided down ethnic lines, with Greek Cypriots in the south and Turkish Cypriots in the north. Currently, Turkey has 30,000 troops stationed in northern Cyprus; the border to the south is maintained by one of the longest active UN missions. Throughout the past almost half century, countless attempts to unify the island have failed. But now, with the discovery of these gas fields, hope for unification is more realistic than ever.

Why are the odds of unification rising? Money talks—and in this case it might be enough to paper over past grievances.

To get the gas to market, it will most likely have to go through Turkey. Located directly north of Cyprus, Turkey is becoming a major energy transit state with pipeline connections to Europe. Turkey is delighted with the prospect of the deal because it desperately wants to diversify its gas imports away from the Russian/Iranian axis.

However, according to Cyprus, the deal is only possible after a peace deal is announced.

Therefore, because of an alignment of economic interests, and the recently highlighted threat from Russia, both Europe and Turkey want the deal to proceed. Consequently, pressure is rising for both sides of Cyprus to make peace. Where diplomacy failed for years, economic windfall looks to succeed.

“Do the math. If Cyprus were reunited it would lead to substantial investments to the island,” stated outgoing UN Envoy to Cyprus Alexander Downer.

“A Cyprus solution would bring a great boost to this economy,” the U.S. ambassador to Cyprus has chimed in. “We know that without a Cyprus solution, otherwise interesting ideas for moving natural gas into Europe through Turkey or to the Turkish market would be at least much more difficult, perhaps impossible.”

The European Union is also confident about the deal. On March 27, President of the European Commission José Manuel Barroso directed a meeting of the Cyprus Steering group in Brussels stating, “The courage shown by the two community leaders to resume talks and the positive atmosphere this has triggered on the island reinforce my belief in the genuine opportunity to solve the Cyprus issue for good.”

Rapprochement may not happen overnight, as there are still a host of issues separating the two. And linking eastern Mediterranean gas to Europe won’t completely solve Europe’s dependency on Russia. But the gas deal appears to be pushing Cyprus to complete reunification—and subsequently, further locking Cyprus into the European sphere of influence.

Speaking of the positive comments from Izzet Izcan, founder of the United Cyprus Party from Turkish Cyprus, Democratic Rally President Averof Neofytou, recently said, “It is very important to hear from a Turkish Cypriot that we have a common vision to see our divided island to be reunited based on human rights and European principles.”

The Trumpet has long forecast Cyprus to be a key member in Europe’s long-term strategy in the eastern Mediterranean. Now, with conveniently timed gas discoveries in the neighborhood, Cypriot reunification will certainly make that strategy easier to implement.