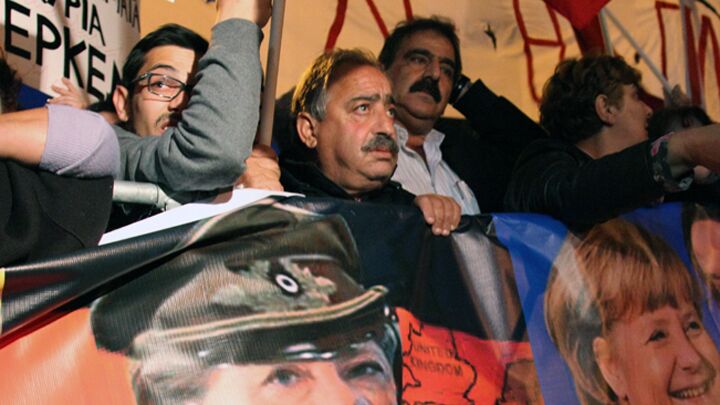 From the May-June 2013 Trumpet Print Edition

The government of Cyprus no longer rules its own country. In March, the world watched in shock as the Cypriot government prepared to obey the Germans and raid the bank accounts of its own citizens.

Why should you be concerned about this small island in the Mediterranean? Cyprus is one of the world’s most strategic pieces of property. It will play a significant role in the near future, and will probably be the launching pad for World Wariii!

Cyprus is a powerful watch-post for anybody who wants to survey events in the Middle East. This is precisely what Germany and Rome are interested in.

A confidential note from America’s embassy in Cyprus published by WikiLeaks proves that America’s diplomats see the importance of that island. Cyprus itself, they wrote, “simply is too small, too distant and too lacking in natural resources to affect U.S. interests.” However, Cyprus houses British intelligence installations and radar stations that America relies on. If America lost access to these British bases, it “would pose a threat to our national security interests in the eastern Mediterranean,” the embassy said.

“It has been joked that ‘a mosquito can’t take off in Tehran without the radar watchers in Cyprus knowing,’” Trumpet contributor James Leigh and Predrag Vukovic wrote in an article for the gloria Center. “Cyprus is also a listening post from which to monitor electronic communication media, very helpful for signals intelligence. With the surveillance technology installed in Cyprus, for decades, Britain has been able to share intelligence data with the United States, and now, no doubt, with the EU, as a member state” (Dec. 22, 2011).

The tiny island nation is also greatly significant as a military base. Fighter jets based in Cyprus can cover much of the region without refueling.

Cyprus has been a bridge between Europe and the Middle East for millennia. It has allowed European nations to project their power into the Middle East, and for Middle Eastern powers to push against Greece and southern Europe. Even today, it still serves as that bridge. When the German military began patrolling Lebanon’s coast in 2006 as part of a United Nations mission, those ships were based in Cyprus. This island is vital for getting ships, planes and even soldiers into the area around Israel.

Germany is deeply aware of the significance of this island. It is moving into the Middle East even as America moves out. Germany wants control of the island as it watches a new power rise in the region.

I addressed this subject in our January 2011 issue: “More than one crusade has been launched from Cyprus. Will we see the last crusade launched from there as well? Is history about to repeat itself? … Cyprus is now a member of the EU. Are European leaders already thinking about Cyprus as a launching pad from which to protect their Jerusalem interests? You can be certain that they are thinking about how to protect the holy places in and around Jerusalem. The Europeans have thought like this for almost 2,000 years!”

Germany Determined to Get Cyprus

The European Union currently has 27 presidents, or kings, but according to biblical prophecy, that number will soon be reduced to 10. Already, it’s becoming clear that Cyprus will almost certainly be part of those 10 nations, or groups of nations, that will constitute the Holy Roman Empire.

After being completely destroyed in World War ii, Germany now rules Europe again. And it has Cyprus in bondage. The German government is so determined to get control of the island that it is willing to ignore the opinion of its own people to get it.

In a poll released in late February, 63 percent of Germans were against bailing out Cyprus. Only 16 percent were for it. Sixty percent said the issue was something “very important” or “important” when it came to selecting Germany’s next chancellor.

Voters don’t want their tax money spent on Cyprus—which they see as merely a safe haven for corrupt Russian businessmen—even if it does give Germany control over strategic real estate.

Still, Chancellor Angela Merkel made the very unpopular decision to bail out Cyprus anyway. To appease the German public, Merkel’s government insisted that Cyprus come up with some of the bailout money. Cyprus had to provide nearly €6 billion (us$7.7 billion). That’s a lot of money for such a tiny island. For Germany—whose 2012 tax revenues are estimated to be €600 billion—it’s closer to pocket change. But in order to control Cyprus without upsetting its core voters overly much, Germany imposed conditions on Cyprus that are so severe they could upset the financial stability of the eurozone!

This bailout won’t be the last. It did not fix Cyprus’s economy. Just like Greece, Cyprus is now dependent upon Germany. Every few months, it will need German approval for the money it needs to keep its economy and government going. And it will have to meet Germany’s conditions to get it.

This Cyprus takeover marks the beginning of one of the greatest military missions in our time. Cyprus provides an intelligence outpost, a naval base, a launching pad and an aircraft carrier for Europe to send its forces into the Middle East.

Europe is watching radical Islam spread throughout northern Africa. Islamists are gaining control of the Red Sea and the Suez Canal. Germany conquering Cyprus is a preparation step for confronting Iran and radical Islam.

All these maneuvers and coming conflicts center on Jerusalem. Radical Islam wants to control Jerusalem, one of its most holy sites. But Europe, the Holy Roman Empire, also wants that city, which it also considers one of its holiest sites.

We are watching the preparations for a repeat of the Crusades!

You ought to take note of this coming clash. The Trumpet has forecast this very event for many years, but most people remain uninterested.

This will be the final crusade to take Jerusalem. It will sweep the entire world into war on an unprecedented scale!

Then, the Bible promises, Jesus Christ will return and establish His headquarters in Jerusalem. In the 1980s, Herbert W. Armstrong brought this message to Cyprus’s acting president at the time, Georgious Ladas. Mr. Armstrong told him, “The God of all of our religions is going to step in supernaturally, by supernatural power, and is going to shake up this world, and is going to bring about such a condition that He is going to change the nature in us.”

Ultimately, this is what this confrontation between the modern Holy Roman Empire and radical Islam is about. It will be a terrible time—but it is going to bring about a wonderful change to man’s nature. No longer will human beings live the way of get. We will learn to live the way of give, which will cause peace and happiness. This coming clash is the final step before God gets rid of Satan and the satanic nature in man that causes all our conflict and suffering. That means we are only a few years away from the reign of God on Earth! These recent events are a sign that man’s rule over man, and the suffering that comes with it, is almost over!