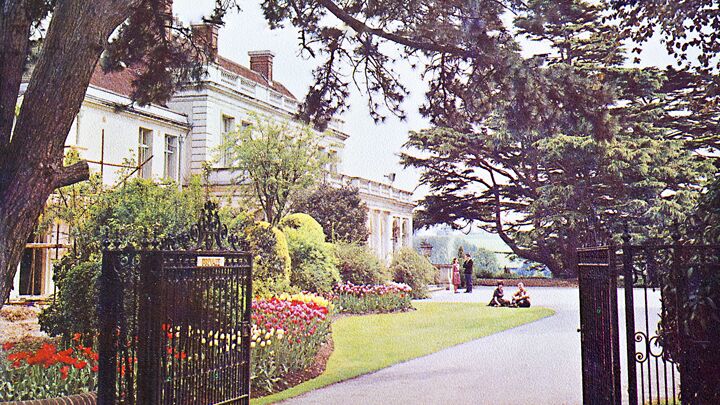 Inspired by the beauty of Ambassador College he asked to write poetry at Bricket Wood.

Located in North Africa, Sudan is geographically positioned between Egypt and Ethiopia. Its primary resources have been agriculture, minerals and oil. Northwest access to the Red Sea ensures trade with oil-rich neighbor Saudi Arabia among other nations.

In 1958 the Umma and National Union conservative parties had agreed to install Mohammed Ahmed Mahgoub as prime minister. However, the military staged a takeover, thrusting him into prison for over half a year. It wasn’t until 1965 that he was officially installed as head of Sudan.

He was minister of foreign affairs from 1956-58 and again from 1964-65. In his first year as prime minister, the constituent assembly forced his resignation, but he was reelected to the top post in 1967 and deposed in a 1969 coup.

After that, Mahgoub moved to England. “Mohammed Ahmed Mahgoub, prime minister of the Sudan until 1969, is now resident in England. Educated at Khartoum University, Mahgoub is a highly respected lawyer and poet,” reported the Worldwide News on July 9, 1973. The newspaper was reporting on a dinner invitation received by Prime Minister Mahqoub to the home of the founder and chancellor of Ambassador College on its campus in Bricket Wood, England. Mahgoub accepted and attended with his son, Sami, himself a businessman in London.

“So impressed is he with the Bricket Wood campus that he asked to spend time here writing Arabic poetry inspired by the beauty he sees,” the Worldwide News reported of the visit (ibid).

This dinner was one of several ways that Mr. Armstrong reached out to prominent leaders throughout Africa, the Middle East, Asia and elsewhere in the world.

In 1962, from the English campus of Ambassador College in Bricket Wood, Mr. Armstrong wrote, “I arranged in the offices of the advertising agency today, for placing our double-page messages in the following editions of Reader’s Digest, in their own native languages in each case: Belgium, Holland, Switzerland, South Africa, India, and the Arabic-language edition reaching a large percentage of the literate and educated peoples of Egypt, Jordan, Lebanon, Syria, Iraq, Israel, Saudi Arabia, Sudan” (co-worker letter, June 18, 1962).

In 1972, Mr. Armstrong had just concluded a trip to India. He wrote, “at New Delhi we were entertained twice at the home of the executive secretary to the President, Dr. Singh, and there we met two or three maharajahs, and the ambassadors from Chile, Argentina, and Sudan, and we received invitations to visit their countries in South America and Africa” (co worker letter March 26, 1972).

In his role of support to President V.V. Giri, and delegate of India to the United Nations conference at Geneva, Dr. Singh was one of the leading exponents of world peace via international law. In 1973, he would be appointed as India’s second judge to the International Court of Justice and remain at the post 15 years, becoming the body’s president from 1985 to ’88. He played a key role in the introduction of Mr. Armstrong to a variety of global dignitaries which returned such invitations as the one from the Sudanese ambassador.

By 1982, subscribers to the Plain Truth magazine in the country were communicating their delight at the ongoing work of the internationally recognized ambassador for world peace.

In 1984, a formalized regional office was established in Kenya to service the surrounding countries including Sudan.

In 1985, ministerial visits were requested from the capital in Khartoum, one of which came from a government employee who’s first contact with the gospel message was via the Plain Truth advertisements in Reader’s Digest negotiated by Mr. Armstrong over twenty years before!

In his lifetime this unofficial ambassador met personally with Ethiopia’s Emperor, Saudi Arabia’s King, Presidents of Egypt and Kenya, underscoring the regional scope and impact of the work toward lasting peace.

Today, Sudan has fractured north from south and is crippled by relentless decades of war in search of peace. The message its ambassador received in India, and which its former prime minister admired in Ambassador College, continues.

“They called him an ambassador for world peace,” writes our founder and editor in chief Gerald Flurry in his booklet The Way of Peace Restored Momentarily. “That is a miraculous understanding, when you realize that he had that kind of an impact on the leaders of this evil world. It is something I think we need to pay more attention to.”

Our editor in chief is right! The world needs “to pay more attention to” this man’s impact on leaders of its nations. The inspired message was in fact the very gospel of Jesus Christ (Matthew 24:14)—the promise of Jesus Christ of His Father’s soon-coming benevolent intervention in world affairs (verses 21-22); intervention to establish for all time true peace through the installation of His government, love, family—His Kingdom on Earth (Isaiah 9:6-7).

The Trumpet will continue to steadfastly recount God’s promise to mankind that all its clamor, bloodshed, war and terrorism from Eden’s garden till today will soon cease, ushering in the only true way of peace, restoring it permanently to Sudan and the world.