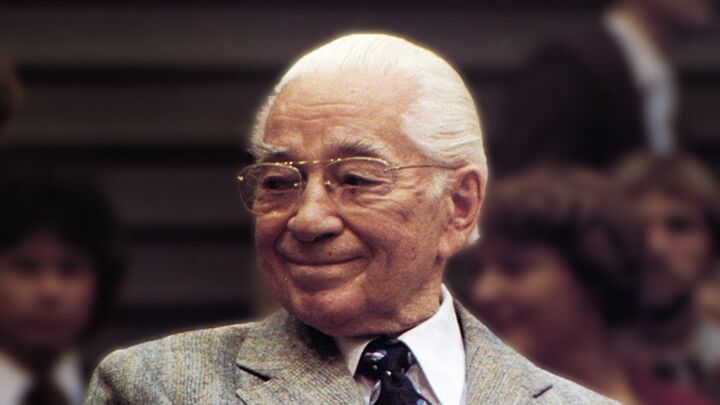 UNESCO presented him gifts and adulation for his global humanitarianism.

On Tuesday, June 12, “at 5 p.m. Mr. Armstrong and his group arrived at the office of the French ambassador to unesco, Jacqueline Baudrier-Terriard, for a meeting with Mrs. Baudrier-Terriard and Andre Zavriew, permanent delegate to unesco for the French government” (Worldwide News, June 18, 1984).

The diplomats had combined experience in the fields of journalism, radio and television. Zavriew was a writer, while Baudrier was a television news editor and chief of Radio-France before being appointed ambassador from 1981 to 1985.

Earlier that day, Mr. Armstrong had met with Director General Amadou Mahtar Mbow at unesco world headquarters in Paris. His visit came amid the United Nations mandated International Youth Year celebrations, created to foster greater awareness of the global demographic of those ages 15 to 24.

“The Ambassador Foundation was asked to help support a youth photographic exhibit scheduled to be displayed in New York, New York; Paris; Moscow, Soviet Union; and Barcelona, Spain. Mr. Armstrong had agreed to discuss the project without making a commitment for support.

“The director general is an avid supporter of development in Third World nations and expressed his appreciation for the Ambassador Foundation’s self-help projects that Mr. Armstrong developed. Training populations of nations to help themselves has more of a lasting value than merely granting funds to needy areas” (ibid).

He presented his guest with two gifts, first a bronze statue of an African woman carrying a bowl on her head and a child on her hip which was crafted in a unesco training center in the Upper Volta, today known as Burkina Faso. Secondly a bronze medal retrieved from another project on the Egyptian island of Philae, a discovery site of treasures from the pharaohs.

The Worldwide News reminded readers that these meetings occurred at a time when the U.S. had expressed its desire to leave unesco citing the body had become a forum for anti-western politicization. The same edition noted, “The French officials expressed the desire that the United States should try to change events from within unesco rather than withdraw. Mr. Armstrong then explained the proposed unesco youth photographic exhibit and other projects the Ambassador Foundation is involved in. Mrs. Baudrier-Terriard and Mr. Zavriew asked questions about the Worldwide Church of God and its activities and asked for copies of Church publications.”

On June 15, 1984, Mr. Armstrong lamented, “My meetings with officials of unesco in Paris a few days ago made plain that the Third World of economically poor nations is, with Soviet influence, gaining control of unesco as well as the United Nations system in Geneva, against the United States and Britain. The United States has already given notice of its intentions to withdraw from unesco at the end of this year. Why do many economically poor nations look with jealousy and hatred against America and Britain? That, too, is explained in the Bible” (co-worker letter)

The Ambassador Foundation was so beloved and internationally respected by the world’s leaders that upon the death of its founder and chairman in January 1986, their messages of condolence called with collective voice from all corners of the globe for its work to be continued.

Tragically, those appointed by this internationally recognized ambassador for peace to perpetuate his humanitarian efforts to extend goodwill and promote world peace among all nations ignored the request of emperors, kings, presidents, prime ministers, ambassadors, diplomats and high government officials to continue this legacy. After closing Ambassador College and seeking to profit from selling the assets, the Ambassador International Cultural Foundation crumbled to defunct status and with it the plea of world leaders to see it continue.

Armstrong Foundation, founded by Gerald Flurry, has served over the past two decades in various countries and cultures honoring the request of world leaders and its governing bodies, such as unesco, who met and worked with Mr. Armstrong and the Ambassador Foundation. Through its efforts, Armstrong Foundation continues its contribution toward bringing about understanding between all peoples in the march forward to soon-coming world peace to be established by Jesus Christ at His promised return (Matthew 24:14; Revelation 10:11).