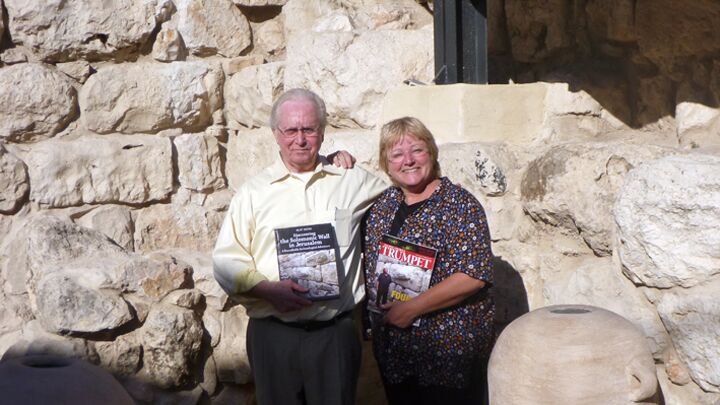 For the past seven years, Jerusalem archaeology has enjoyed some unusual support: direct participation from a tiny college of several dozen students in Oklahoma.

The Philadelphia Trumpet’s publisher, the Philadelphia Church of God, also operates a small liberal arts school, Herbert W. Armstrong College (hwac). Through the past six phases of archaeological excavation in the City of David and the Ophel, Armstrong College students and alumni have been there, enthusiastically breaking rocks, shoveling soil and brushing away dust.

Nearly a quarter of the college’s current student body has spent time in Jerusalem volunteering on these digs. They consider the opportunity an honor and a thrill.

On the other end, Jerusalem’s premier archaeologist, Eilat Mazar, says she considers the Armstrong College contribution indispensable. The hwac personnel not only serve as enthusiastic labor on the dig site, but one alumnus serves as an area supervisor; one student was an assistant supervisor on the most recent phase of excavation; a few students have chronicled the work as videographers and photographers; several have helped publish literature about the dig. The student staff also produces the excavation’s official website, The Key to David’s City.

The unlikely but wonderfully productive relationship between these two entities, though only seven years old, actually traces its roots back much deeper. It started with the namesake of the college, Herbert W. Armstrong.

As chairman of the Ambassador International Cultural Foundation, Herbert W. Armstrong supported humanitarian projects all over the world and met with dozens of heads of state from Asia to Africa to Europe and beyond.

Of all the places he traveled and connections he forged, however, Mr. Armstrong’s greatest affection was for one tiny, new country at the heart of the world: Israel. A devoted student and teacher of the Bible, Mr. Armstrong cherished both the remarkable history and the glorious future of Jerusalem. Between 1967 and his death in 1986, he met with many of Israel’s prime ministers, presidents and other dignitaries, including Zalman Shazar, Golda Meir, Yitzhak Rabin, Yitzhak Navon, Menachem Begin, Yitzhak Shamir, Shimon Peres, Moshe Dayan, Moshe Kol and Teddy Kollek.

One particularly strong relationship Mr. Armstrong forged was with Hebrew University Professor Benjamin Mazar. After Israel won control of the Old City in the 1967 war, Professor Mazar was placed in charge of Hebrew University’s massive new archaeological dig near the Temple Mount in 1968. Mr. Armstrong flew to Israel to meet with Mazar and was dazzled by the scope and importance of the excavation.

Soon after, Professor Mazar, joined by dean of Hebrew University’s Humanities Program Josef Aviram, traveled to America to tour Mr. Armstrong’s Ambassador College (AC) campuses in California and Texas. Meanwhile, Hebrew University was fielding offers from several major American universities that hoped to collaborate on the project. These offers were rejected, and AC was given a 50/50 joint partnership with Professor Mazar and Hebrew University.

The partnership was formalized on Dec. 1, 1968, at the presidential palace in Jerusalem. There, Tourism Minister Moshe Kol proposed “an iron bridge” between Hebrew University and Ambassador College “that can never be broken.”

Beginning in the summer of 1969, scores of Ambassador College students packed up and flew to Israel to volunteer on the excavation. The “Big Dig,” as it became known, would continue for 10 years and grant hundreds of AC students the opportunity to touch those ancient stones.

In addition to sending students who were praised as the excavation’s most enthusiastic laborers, Ambassador College also shouldered half of the cost of excavations from 1968 until 1976. The work they undertook yielded many impressive artifacts, some of which dated back to the time of Solomon’s temple.

As the years passed, the friendship between Professor Mazar and Herbert Armstrong blossomed. The two friends could often be seen walking arm in arm visiting the dig site, or relaxing at Dr. Mazar’s home in Jerusalem. Professor Mazar also visited Ambassador College multiple times. On one occasion, Mr. Armstrong, Josef Aviram and Professor Mazar teamed up to host an archaeological exhibit in Japan, where they met with Prince Mikasa.

Professor Mazar and Mr. Armstrong shared many similar traits. Both were straight-talking and uncompromising. Both believed in the authority of the Bible and in objectively proving the truth, whatever it might be, rather than striving to force it into preconceived beliefs. In fact, Mazar was praised as a pioneer of a research discipline that fused archaeology, geography and histories described in Jewish Scripture and other ancient Near Eastern sources. He was also noted for accurately reporting details about Jerusalem’s important Umayyad period under Muslim rule, impressing visiting Arab leaders with his candor.

After Professor Mazar wrapped up his Temple Mount excavation in 1978, Mr. Armstrong continued to support archaeology in the City of David with the excavations of Prof. Yigal Shiloh.

Herbert Armstrong died Jan. 16, 1986. In reflection, Professor Mazar wrote, “During the years of our association with him, all of us developed the highest regard for [his] wonderful personality and qualities. His deep devotion to the ideals of peace and justice in the spirit of the biblical prophets was appreciated by his friends in Israel. His feeling for Israel and Jerusalem was manifested in his true interest in the archaeological excavations near the Temple Mount and in the City of David. His name will always be attached to this most important undertaking carried out in Jerusalem.”

During Benjamin Mazar’s excavations in the shadow of the Temple Mount, a young girl was often seen at his side, rubbing elbows with archaeologists and Ambassador College students. She was the professor’s granddaughter Eilat.

Benjamin Mazar’s Temple Mount excavations ended in 1978, but years later, a second round of digging began there, this time under the direction of Eilat Mazar.

Meanwhile, back in the United States, the work of Herbert W. Armstrong was also being revived. After Mr. Armstrong died, his successors abandoned his legacy; within a decade, his globe-encompassing, multimillion-dollar humanitarian work was practically dead, and its work in Israel was an abandoned ruin. But in December 1989, his legacy was revived when Gerald Flurry started the Philadelphia Church of God.

In 1996, Mr. Flurry established the Armstrong International Cultural Foundation, patterned after Mr. Armstrong’s Ambassador International Cultural Foundation. The foundation began supporting a small number of humanitarian ventures in Jordan and Israel. Its first project, in fact, was to raise up one of the initiatives Mr. Armstrong had established and his successors had abandoned: helping teach handicapped children in Jordan.

In the summer of 2005, the world of archaeology was rocked when Dr. Mazar announced that her team had unearthed a huge building in the ancient City of David that dated to the 10th century b.c.: the palace of King David!

Gerald Flurry read about Dr. Mazar’s landmark discovery with keen interest, and was thrilled to learn of her family connection to Benjamin Mazar.

In July 2006, Herbert W. Armstrong College president Stephen Flurry contacted Dr. Mazar. Though many years had passed since she had worked with Mr. Armstrong, her childhood memories flooded back. “Without the support of Mr. Armstrong and the Ambassadors, the Temple Mount excavations would have never become, as it did, the most important and largest excavations in Israel at that time,” she recalled.

When Mr. Flurry said that Herbert W. Armstrong College was eager to provide support to her excavations, Dr. Mazar pounced on the offer. Within months, a handful of hwac students were living in Jerusalem, working on Dr. Mazar’s City of David projects. She saw it as a natural continuation of the relationship she had grown up with, and said she was “excited to have the Ambassadors back with us.”

Since the fall of 2006, Herbert W. Armstrong College has participated in several key phases of Dr. Mazar’s excavation in Jerusalem, and has contributed to a string of remarkable discoveries.

In late 2006, hwac students were present when Dr. Mazar discovered the eastern wall of David’s palace (article, page 8). They were on site in 2007, when continued excavations revealed that a wall previously thought to date to the Hasmonean period was in fact a segment of the fortification wall built by Nehemiah (article, page 15).

In 2008, Armstrong students were digging with her in the City of David when Dr. Mazar discovered the seal impression of Gedaliah, who is mentioned in Jeremiah 38:1 (article, page 14). During the same dig, the team discovered a water tunnel more than 150 feet long that might have been the conduit through which King David’s forces crawled to conquer the city in the 10th century b.c. (article, page 12). The excavation of the tunnel, Dr. Mazar said, was almost entirely an “Armstrong College enterprise.”

In late 2009 and 2010, Herbert W. Armstrong College was with Dr. Mazar again when she unearthed what is believed to be a royal complex built by King Solomon (article, page 10).

Last year, Armstrong College students again joined Dr. Mazar as she resumed work on the Solomonic complex. Another contingent of students helped with a second portion of excavation on the same area this past summer, which turned up the Ophel treasure (article, page 2).