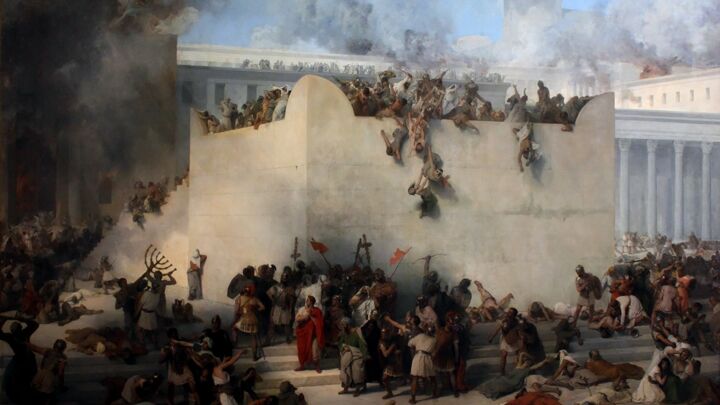 It is one of the Holy City’s most nightmarish chapters: its besiegement at the hands of the Roman army in a.d. 70. Before razing the city and destroying the temple, Roman forces put a chokehold on the Jewish inhabitants over a period of several months, creating a deadly famine and unspeakable suffering.

Besides the terror of an impending breach of their defenses by Roman forces outside, the Jews also faced bandits from their own people marauding within the city. There was nowhere “in the city that had no dead bodies in it, but what was entirely covered with those that were killed either by the famine or the rebellion; and all was full of dead bodies of such as had perished either by the sedition or by that famine,” explained Flavius Josephus, the first-century eyewitness and historian. “So now the last hope, which supported the tyrants and that crew of robbers which were with them, was in the caves and caverns underground …” (The Jewish War, emphasis added). Josephus wrote that the Jews hoped to hide out in these caves until the Romans were gone.

An archaeological find this past summer brought this violent history into poignant relief. Excavators uncovered what they believe to be one of these underground refuges that these besieged Jews turned to as their last resort.

The discovery came to light when workers in Eilat Mazar’s Ophel dig team began exploring a cave below the Area B excavation area.

Three vertical water shafts connected the cave to the First Temple period structure directly above it. Along with the thick plaster coating on the walls of the cave, these shafts indicated that the cave had been used as a water cistern in that earlier period.

As the cave excavation continued, the team discovered substantial walls built against the plaster. This showed that “there was some type of occupation or at least construction” within the cave after its use as a cistern had ceased, according to Area B supervisor Brent Nagtegaal.

These walls were connected to another interesting element of the cave: a system of tunnels chiseled into one side. Removal of dirt and rock debris revealed a series of vertical and horizontal passageways. All the pottery within the debris belonged to the same period as the walls inside the cave: the Herodian period—the time that ended with the a.d. 70 siege.

The tunnels had many signs of human occupation: handholds and footholds on the vertical shafts; nooks for oil lamps with traces of charcoal on the bedrock above them. Some tunnels were incomplete: They went nowhere, as if work on them had been abruptly interrupted.

Josephus’s account ends ominously: Of the Jews’ hope that they could hide out and later escape, he says, “This was no better than a dream of theirs; for they were not able to lie hid either from God or from the Romans.”

Excavation inside the cave is not yet complete. Archaeologists hope to understand its history more fully when they return to dig in the next season of excavation.