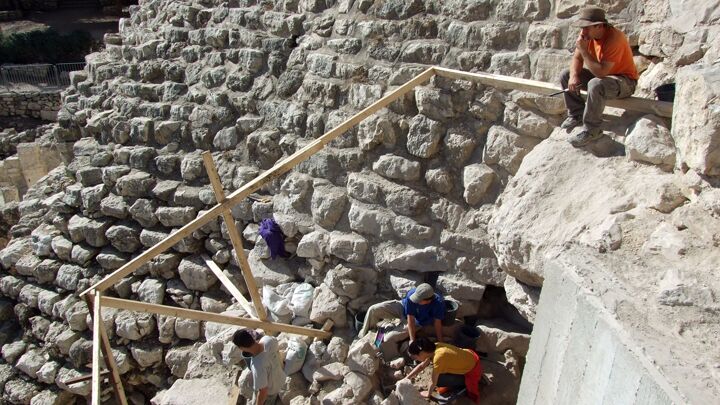 For years, adjacent to the wall of King David’s palace stood a large stone tower archaeologists believed to have been built during the Hasmonean dynasty (142-37 b.c.). In the summer of 2007, a section of that tower, built on a steep slope just outside the palace, began to give way, indicating it was on the verge of collapse. What started as a simple task of repairing a collapsing tower turned into a six-week dig—and a fascinating new discovery.

On Nov. 8, 2007, at an archaeological conference at Bar Ilan University near Tel Aviv, Eilat Mazar explained, “Under the tower, we found the bones of two large dogs—and under those bones, a rich assemblage of pottery and finds from the Persian period [sixth to fourth centuries b.c.]. No later finds from that period were found under the tower.” The pottery is what clearly dates the time period for the tower’s construction. Had the tower been built during the second or first century b.c., Dr. Mazar explained, sixth-century pottery underneath the wall would leave a chronological gap of several hundred years. Therefore it was clear, based on the pottery dating, that the tower was built three to four centuries earlier than previously thought.

What was happening at that time in Jerusalem’s history?

In the fifth century b.c., the city lay in ruins. Its walls were broken down; its gates were ashes.

Hearing about the great affliction of the inhabitants there, Nehemiah, a Jew who served in the court of the Persian King Artaxerxes, appealed to God for intervention. The king noticed his distress, and Nehemiah explained that he had a heavy heart because the city, “the place of my fathers’ sepulchres, lieth waste, and the gates thereof are consumed with fire” (Nehemiah 2:3). He asked the king for leave so that he might coordinate several construction projects in Jerusalem. Nehemiah made this request in the 20th year of Artaxerxes, about 445 b.c. (verse 1).

The king granted his request and provided enough materials for Nehemiah to rebuild the temple gates, a house for himself, and the wall around the city. It was this last project that Nehemiah is most famed for completing. As the Bible describes it, he was so driven to erect that barrier to protect the Jews from their enemies that he motivated a crew to work nonstop. They completed the wall in a mere 52 days (Nehemiah 6:15).

At the 2007 archaeological conference, Dr. Mazar announced to 500 attendees that she had discovered this famed wall of Nehemiah. The tower, which formed part of it, had been constructed during the Persian Empire’s heyday, which is precisely when the Bible says Nehemiah rebuilt the wall around Jerusalem.

Today, many of the landmarks described in Nehemiah’s book can now be clearly identified, thanks in large part to the work of Eilat Mazar. She has been working hard and fast, just as Nehemiah did 2,500 years ago.