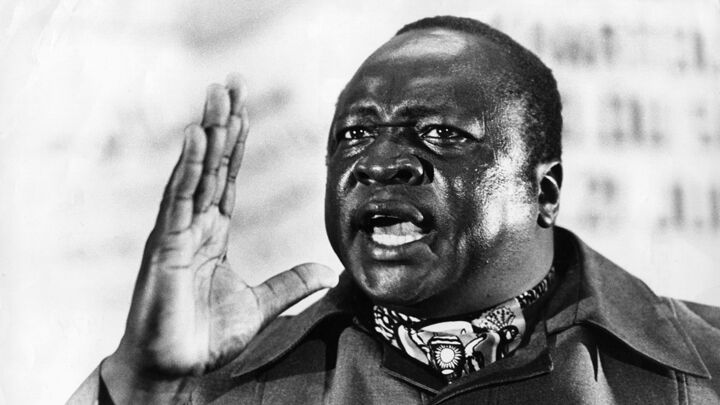 Gospel of peace embraced amid Idi Amin’s horror of war.

Idi Amin famously led a coup in 1971 which established him as president of Uganda. History shows that for the next eight years, this little-educated career soldier savagely and mercilessly terrorized his country. His bloody dictatorship was held together by his ruthless control of the army and resulted in impoverishing the once prosperous nation, stamping out resistance with the murder of hundreds of thousands of his fellow countrymen.

Amin was the first East African leader to abandon diplomatic relations with the State of Israel and fight alongside with Islamic nations. Along with his hatred of Britain for refusing to arm his empire, he espoused some of the ideas of Adolf Hitler.

During this time, Uganda’s citizens asked and received attention from Herbert W. Armstrong by way of his regional office in Britain. This led to five ministerial visits to the capital, Kampala, for those interested in the World Tomorrow gospel message they had been listening to on radio and for the 830 subscribers reading the Plain Truth magazine.

As the security in the country deteriorated, the tribal cleansing of all opposed to Amin and his henchmen continued, forcing thousands from their homes as they fled to neighboring countries. “My family used to receive the Plain Truth in Africa, but a fortnight ago they were evacuated from Uganda,” wrote a subscriber in the March 1973 edition. “Leaving the country in which we toiled and helped to build and develop has meant abandoning everything we had worked for and gained: our literature, our property and personal possessions. The only cherished items not left behind were your magazines, full of hope, wisdom and promises of the better world-to-come …. May your subscription list grow till all the people of this world get your enlightening education, and better themselves.”

Despite the domestic catastrophe unfolding in Uganda, Mr. Armstrong persisted in 1974 with preliminary work for public appearance campaigns that would impact West Africa and its persecuted people. A year later, on May 26, 1975, he wrote co-workers: “I am seven miles high over the Sahara Desert flying to Nairobi, Kenya, for the next big campaign. We expect a large and very successful campaign there.”

During this trip, plans were finalized for a three-night campaign at the Kenyatta Conference Center, during which a special film, Ambassador for World Peace, was shown to highlight other successful appearances worldwide by this messenger of peace. Those Ugandans brave enough to risk their lives to cross Lake Victoria and travel to Nairobi, desperate to hear the gospel message, witnessed a powerful delivery by Herbert Armstrong.

“I had such an inspired and enthusiastic audience in that big auditorium,” Mr. Armstrong wrote, “that I had to tell them that their eager listening and enthusiastic response inspired me—and by the final, third night of the campaign they had me so inspired that I think my message was one of the most inspired and powerful I have ever delivered” (co-worker letter, June 24, 1975).

In July of that same year, Mr. Armstrong still could not stop thinking about the impact of the audience during that northeast African campaign. He wrote of how the audience moved him; he realized just how much he and we all need that kind of encouragement and inspiration.

God used Mr. Armstrong as a messenger of encouragement to the Ugandan and other African people, and that radiated right back through their joy and happiness upon receiving the very gospel message of Jesus Christ (Matthew 24:14).

“The lectures given in Nairobi brought a surprising number of new requests for literature from Zambia, Malawi, Tanzania and Uganda, which are the neighboring countries around the hub of Kenya,” reported the Oct. 21, 1975, edition of the Bulletin.

The relentless pursuit of giving Christ’s good news to West Africa resulted in the establishment of a branch office of the Ambassador International Cultural Foundation, a readership for Human Potential magazine with its positive hope-filled future vision, and what became described as a “frantic clamor” of requests for the Plain Truth magazine, associated literature and ministerial visits. These fruits were compounded by the strong relationship between Mr. Armstrong and President Jomo Kenyatta, father of the host nation for these gospel message activities, impacting the neighboring countries’ leadership.

So influential was Mr. Armstrong in West Africa that by 1976 he and Kenya’s president jointly founded a technical college to teach the local people how to help themselves in furthering their education for productive contribution to the economy. Mr. Armstrong’s consul-general recalled, “While there, following a meeting in the office of President Kenyana, we met the Kenyan foreign minister, just returned from Uganda aboard President Amin’s private aircraft, on his way to report to President Kenyatta the successful conclusion of his efforts to bring about more harmonious relations with that nation, relations seriously threatened by the respective roles of the two countries in the daring and successful Israeli rescue mission to free the innocent hostages held in Uganda by Palestinian terrorists a few weeks earlier” (Worldwide News, Aug. 16, 1976).

As the expansion of the gospel message continued in the region, tensions boiled over in 1978 when Amin invaded neighboring Tanzania—some of whose citizens had attended that famed campaign and requested further contact. The Tanzanians responded by invading Uganda the following year, reaching Kampala and forcibly removing the maniacal dictatorship. However, Amin made his escape to Libya and later found asylum in Saudi Arabia until his death in 2003.

Our Ugandan subscribers—and those impressed by Mr. Armstrong’s powerful campaign through West Africa—can realize the divine intervention involved in his work of preaching the gospel to those in this region.

“They called him an ambassador for world peace,” writes our founder and editor in chief Gerald Flurry in his booklet The Way of Peace Restored Momentarily. “That is a miraculous understanding, when you realize that he had that kind of an impact on the leaders of this evil world. It is something I think we need to pay more attention to.”

Our editor in chief is right! The world needs “to pay more attention to” this man’s impact on leaders of its nations. The inspired message Mr. Armstrong shared was in fact the very gospel of Jesus Christ (Matthew 24:14)—the promise of Jesus Christ of His Father’s soon-coming benevolent intervention in world affairs (verses 21-22); intervention to establish for all time true peace through the installation of His government, love, family—His Kingdom on Earth (Isaiah 9:6-7).

The Trumpet will continue to steadfastly recount God’s sure word of Bible prophecy assuring mankind that all its clamor, bloodshed, war and terrorism from Eden’s garden till today will soon cease, ushering in the only true way of peace, restoring it permanently to Uganda and all the world.