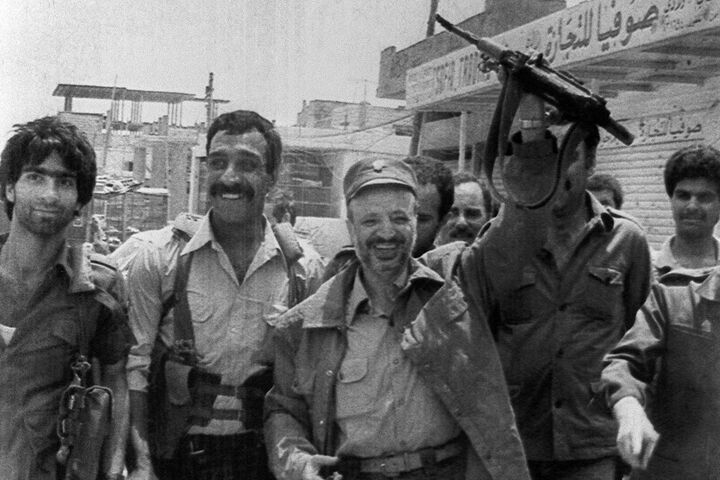 The king flew to the front line where his troops were engaged in battle. This was the atmosphere recalled by his ambassadorial compatriot in the pursuit of peace, during a visit to Jordan for a meeting with the Hashemite head of state.

Writing to co-workers July 16, 1982, Herbert W. Armstrong recounted how he waited five days to meet with King Hussein amid the foaming wrath of Mideast animosities: “After the 1967 war, when the Israelis took over the West Bank in Palestine from Jordan, Communist and terrorist propaganda began stirring up discontent and hatred against the Israelis.”

When “King Hussein kicked Arafat out of Jordan,” Mr. Armstrong wrote, the terrorist leader set up shop in Lebanon.

He continued, “Yasser Arafat led this terrorist war against the Israelis and built up the Palestinian Liberation Organization (plo), making headquarters in West Beirut. This also brought on civil war in the city of Beirut, with the Arab faction against the Christians.”

During the plo’s infancy, Mr. Armstrong was privately meeting with Lebanon’s Roman Catholic president, Suleiman Franjieh, and the country’s Arab prime minister, Takieddin el-Solh. At the time, Beirut was the economic hub of the Arab nations. However, the city was to be almost leveled by the civil unrest.

“Out of it, Yasser Arafat emerged with a sizable military force, well armed with major weapons by the Soviet Union. But Arafat carried on his terrorist activities, even hijacking aircraft with many women and children aboard from nations unconcerned in the Palestinian-Israeli dispute, threatening to blow up hundreds of innocent lives unless other nations acceded to Arafat’s demands against Israel” (ibid).

Mr. Armstrong was writing from London at the time, where he was staying at the famed Dorchester Hotel. A few months prior he was at the same location when within days of his departure an Israeli official was shot by a plo terrorist, which incited Israelis to push the terrorist organization out of the western suburbs of Beirut in retaliation.

Simultaneously, with Soviet support for the plo, Mideast tensions were compounded by no less than three terrorists, armed and trained in subversive tactics of aggression, targeting victims with bomb blasts in pinpoint assassinations, amid other activities of terrorism, causing much confusion in the region.

This unofficial ambassador for world peace, Herbert Armstrong, witnessed first-hand the pressure and strain brought upon not only Jordan’s king, but the leadership of both Lebanon and Israel, by these protagonists of war.

One such instance occurred earlier that March, when the two were scheduled to meet in Amman. In the dark of night the king was urgently sought by his military advisers to make haste and fly to yet another battlefront, where under his supreme command Jordanian forces allied with the Iraqi military were fighting an Iranian insurgency.

That July, after his five-day wait in Jordan for his meeting with King Hussein, and with the monarch’s schedule jam-packed, the king’s respect for Mr. Armstrong was powerfully evidenced when, as he met with Mr Armstrong, “he kept waiting in another room in the palace the chief adviser to President Mubarak of Egypt, who had flown to Amman with a special confidential message from the Egyptian president.”

That chief Egyptian adviser surely knew of this white-haired patriarch, a regular visitor to Cairo in the pursuit of peace, who had not only met with Hosni Mubarak, but was much beloved by Egyptian leadership, notably its fallen president, Anwar Sadat, shot dead by the bullets of terrorism at the hands of the Muslim Brotherhood.

In Vatican City that September 15, Pope John Paul ii gifted the plo terrorist leader a private 20-minute meeting, after which his official press statement rebutted the fury in Jerusalem over his actions by stating his gift to Arafat “demonstrated his benevolence toward the Palestinian people … expressing the wish that an equitable and lasting solution be reached as soon as possible to the Middle East conflict, which would, excluding recourse to armed violence in any form and above all to terrorism and vengeance, lead to the recognition of the rights of all people, in particular to those of the Palestinians, to a homeland of their own and of Israel to her security” (Plain Truth, January 1983).

The internationally recognized ambassador for peace had a response to the papal-plo meeting and the official photographs and statements that followed. “Just a couple of days ago the pope received terrorist leader Yasser Arafat …. Although my aides told me Arafat had invited me to a meeting with him,” Mr. Armstrong wrote to co-workers Sept. 17, 1982, “I refused to see him or allow one of my aides to see him in my stead.”

It should be obvious why the internationally recognized unofficial ambassador for world peace rejected the meeting invitation from such a leader.

“Look at the list of world leaders Herbert W. Armstrong came into contact with, and who responded warmly to him,” wrote Trumpet founder and publisher Gerald Flurry in his new booklet The Way of Peace Restored Momentarily. “They called him an ambassador for world peace. That is a miraculous understanding, when you realize that he had that kind of an impact on the leaders of this evil world. It is something I think we need to pay more attention to.”

Our editor in chief is right! The world needs “to pay more attention to” this man’s impact on the world’s leaders of nations. The inspired message Mr. Armstrong shared in person with world leaders was, in fact, the very gospel of Jesus Christ! (Matthew 24:14)—the very promise of Jesus Christ of His Father’s soon-coming benevolent intervention in world affairs (Matthew 24:21-22). Intervention to establish once and for all time true peace through the installation of His government, His love, His Family, His Kingdom on Earth (Isaiah 9:6-7).

Will you, individually, pay more attention to this gospel message than those world leaders who heard it direct from an aged apostle’s lips?

The Trumpet will continue to steadfastly recount God’s sure Word of Bible prophecy assuring mankind that all its clamor, bloodshed, war, terrorism and failed “peace processes,” from Eden’s garden till today, will soon cease, ushering in the only true way of peace, restoring it permanently on this Earth.