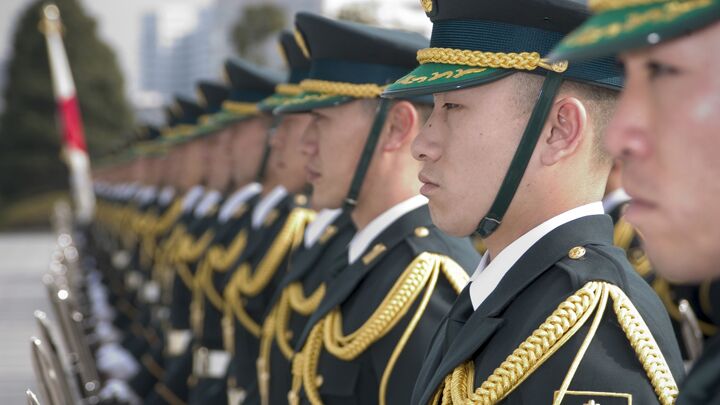 Japanese elites have always regarded the nation’s ‘self-defense force’ as having the potential to act in an offensive role when the need arises.

Raised in 1954, Japan’s so-called “self-defense force” comprises a fully integrated, ultra-modern assemblage of land, sea and air components that rival those of any other world power in the quality and efficiency of its organization and the ability to project its power far beyond the home nation’s shores.

Aided and abetted by the United States, the creation of Japan’s Self-Defense Force (sdf) was in direct contravention of the Japanese postwar constitution, which clearly stated that “land, sea, and air forces, as well as other war potential, will never be maintained.”

Having noted that, it should be further noted that no formal treaty or agreement exists between Japan, the U.S. or the UN which binds the nation to official reliance on either, nor on any other entity, for its security and defense. Thus it is that Japan has quietly built up a military force to potentially rival that of most world powers, in reality to protect its present national, and future imperial, interests.

Similar to Germany—a nation whose defense budget is roughly equivalent to that of Japan—till recent times Japanese elites have been careful to stress the self-defense role of its significant military force. Much publicity is given to its humanitarian and peacekeeping support roles.

As we have previously highlighted, that attitude is rapidly changing under current Prime Minister Shinzo Abe.

Just as the Balkan Wars were used by German elites to reintroduce a German offensive military force to the global public, Japan is using two perceived threats to its security as catalysts to changing the view of politicians and the public to support more offensive deployment of its sdf.

Geopolitically, the most immediate threat to Japan comes at present from China’s increasing economic and military strength added to continuing friction between Taiwan and China and between North and South Korea.

Another major concern is the protection of vital sea lanes between the Middle East and Japan. With Japan receiving 90 percent of its oil through the Persian Gulf from the Middle East, the maintenance of reasonable stability in the region—especially the security of shipping lanes in the Persian Gulf, Arabian Sea, India Ocean and Straits of Malacca—is vital to Japan’s ongoing security and economic development.

The true scope of the Japanese elite’s support of the nation’s military efforts is substantially revealed in the following assessment of its military expenditure: “Japan’s defense budget is still estimated to be one of the five or six largest in the world. In 2006, Japan had a $45 billion defense budget, the fourth-largest in the world, and ironic for a country that officially doesn’t have a military. In 2002, Japan spent $42.6 billion on defense, more than France, Russia and China. Only the United States spent more” (Facts and Details, Jeffrey Hays, January 2013).

The real fiction in relation to Japanese defense is that its considerable military might is viewed by Japanese leadership as being purely for self-defense purposes. The reality is that the sheer strength of current Japanese military power—let alone its potential for rapid growth—belies the intent of Article 9 of its constitution, the clause that ostensibly restricts Japan to mounting a force of a nature sufficient for the self-defense of its immediate geographic arena.

It also begs the question as to why Japan would seek to become a nuclear power. As the Christian Science Monitor observed, “With the technical means to build advanced nuclear weapons within six months, what remains is the political judgment of the ruling elite of Japan first to assess its strategic imperatives and then the political consequences of going nuclear” (April 25, 2005).

Under Prime Minister Abe, it appears that the “political judgment of the ruling elite” in Japan is to enable Japan to become a nuclear-armed military power of some consequence.

As Global Research reported on May 7, “A nuclear-armed Japan would dramatically alter relations in Asia, as it would be less dependent on the U.S. militarily and more able to independently prosecute its economic and strategic interests.”

But the real fiction here is that Japan is being forced into a more aggressive defensive stance by pressure from the U.S. That is simply not the case.

The plain fact is that, under the cloak of Article 9 of its constitution, Japan—entirely of its own initiative and in its own national interest—has built one of the most powerful military forces in the world, a force with the capability of power projection far beyond the realm of self-defense.

How soon will the world wake up to the fiction that a pacifist Japan continues to be content with a military role of purely self-defense?

Bible prophecy—regardless of present international relations around the South China Sea—declares that Japan will soon join with China and Russia to form the greatest military combine ever in history. In fact, the formation of that massed international force is a great harbinger to the mightiest of all battles, prophesied to assemble in battle on the great plain of Megiddo (Revelation 16:12, 16; 9:16).

The good news is that this “mother of all battles” immediately precedes the establishment of the Kingdom of God on Earth—a millennial rule by Christ and the saints which brings peace, prosperity and joy to the whole world!

These prophecies are explained in our booklets Russia and China in Prophecy, Daniel Unlocks Revelation and The Wonderful World Tomorrow—What It Will Be Like. These booklets explain the prophecies regarding the great military combine of the “kings of the East” revealed in Ezekiel 38:1-6 and what their rise to power portends for the immediate future, on to the most fantastic future of Jesus Christ’s coming rule on Earth.

They are vital to understanding the present rapidly developing final world order immediately preceding Jesus Christ’s return—a world order that will negatively impact the U.S., Britain and its dominions very powerfully, before the Creator’s intervention to bring those nations relief.

Prophecy declares this emerging world order will comprise three competing powers—an Islamist combine, a European empire, and an assemblage of Far Eastern nations. The coming clash between these world powers will be the catalyst for Armageddon, the war that will finally end all wars on Earth for 1,000 years.

Continue to watch Japan as the kings of the East arise as a most potent sign of your Savior’s imminent return to this Earth to set up a world order at a level of perfection never yet experienced in the whole history of man.

Only then shall all nations truly learn to live in peace (Isaiah 9:6-7).