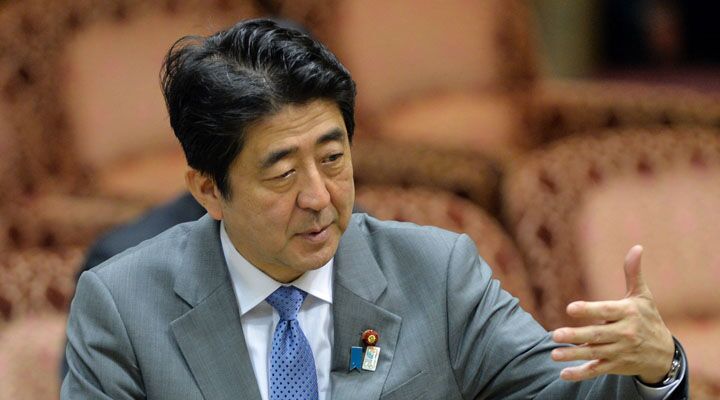 Under Prime Minister Shinzo Abe, is Japan to become a nuclear-armed military power?

Recent reports about the imminence of the opening of a massive reprocessing facility in Rokkasho, northern Honshu, have analysts wondering about the Japanese government’s intent for its use. The real concern is that the plant could produce weapons-grade plutonium for manufacturing nuclear weapons.

Japanese officials and nuclear-industry experts claim that the Rokkasho reprocessing plant “is capable of producing nine tons of weapons-usable plutonium annually … enough to build as many as 2,000 bombs …” (Wall Street Journal, May 1). Global Research expresses the concern that “A nuclear-armed Japan would dramatically alter relations in Asia, as it would be less dependent on the U.S. militarily and more able to independently prosecute its economic and strategic interests” (May 7).

The oriental mind is known for being far-sighted in its vision. A nuclear-armed potential has been on the minds of Japanese defense strategists for quite some time. In fact, the Global Research claims that “Within Japanese ruling circles … there has been a barely concealed ambition to have a nuclear arsenal. Japan’s extensive nuclear industry was established in part to ensure that the country had the capacity to build such weapons” (ibid).

Costing over us$21 billion to build—making it “the world’s most expensive nuclear facility”—construction of the Rokkasho facility was started 20 years ago. So the imminence of its commissioning should be no real surprise to Washington. Yet the hue and cry over the prospect of a nuclear-armed Japan is only now rising in volume.

Any astute foreign-policy analyst familiar with history and the specifics that govern international relations ought to have predicted that Japan would ultimately have to consider cutting its dependence on America for its national security. Given that three of Japan’s neighboring nations—China, North Korea and Russia—are nuclear powers, it was only a matter of time before Japan proceeded to develop its own nuclear defensive capability.

In their book The Coming War With Japan, George Friedman and Meredith Lebard observe:

Japan is dependent on imports for almost all of its raw materials. The more it produces, the more raw materials it needs to import …. In order to import raw materials, Japan must have access to the country that supplies them, as well as secure sea-lanes for transporting the goods. Securing these resources and the sea-lanes is both a political and a military problem, one that Japan has depended on the U.S. to solve. The issue is whether Japan can continue to rely on the United States and if not, how it can go about securing these supplies itself.

This issue has become even more critical under the current U.S. administration which appears to be so adept at constructing foreign policies destined to abject failure.

Germany has obviously read this and is responding by cranking up its behind-the-scenes maneuvers on developing a more assertive military strategy.

Now, Japan’s conservative leader, Shinzo Abe, and his even more conservative supporters in the area of foreign policy and defense, is starting to react as well.

On the 60th anniversary of the U.S. atomic bomb attack on Hiroshima and Nagasaki, the Christian Science Monitor observed that “Abe has often said he became a politician to help Japan ‘escape the postwar regime’ and throw off the shackles of wartime guilt. To him, that means revising the Constitution to remove restrictions on Japan’s military, specifically its right to collective self-defense—or coming to the defense of an ally under attack. … With the technical means to build advanced nuclear weapons within six months, what remains is the political judgement of the ruling elite of Japan first to assess its strategic imperatives and then the political consequences of going nuclear” (April 25, 2005).

Eight years following that assessment, “the political judgment of the ruling elite” in Japan appears to be wholeheartedly supporting the nation advancing toward possessing its own nuclear-armaments capability. The commissioning of the Rokkasho facility will send a powerfully dramatic signal to not only Japan’s neighbors, but to the whole world that Japan is returning to its old militaristic traditions.

In a quite prescient observation, the Monitor stated back in 2005, “The prospects of Japan moving further toward nationalism and militarism are made worse by the possible successor to Prime Minister Junichiro Koizumi, Shinzo Abe” (ibid).

That has become today’s reality.

Abe lost little time in elevating Japan’s postwar Japanese Defense Agency to full ministerial status during his first term as prime minister. Now, early in his second term in Japan’s chief office of government, he appears intent on pursuing a more aggressive, nationalistic—even militaristic—foreign policy than Japan has known since the close of World War ii.

Global Research reports that “Abe has already announced the first increase in Japan’s defense budget in a decade and has declared his determination to counter, including militarily, any Chinese move to claim disputed islands in the East China Sea” (op. cit.).

Perhaps none of this would be so unsettling if not for the imminent commissioning of the Rokkasho nuclear reprocessing plant giving the nation the capacity to begin producing up to 2,000 nuclear weapons per year within five months of start-up.

According to the Japan Atomic Energy Commission and the Rokkasho plant operator, Japan Nuclear Fuel, the reprocessing facility could be commissioned as early as October this year.

Should Japan then indicate it is intent on building its own nuclear arsenal, “it would trigger a nuclear arms race in the region. A nuclear-armed Japan would dramatically alter relations in Asia, as it would be less dependent on the U.S. militarily and more able to independently prosecute its economic and strategic interests” (ibid).

Shinzo Abe could just prove to be the wild card in Japanese politics who decides that it’s time for Japan to return to its pre-war imperialist foreign policy, just as certain German elites are seeking the same in the Western Hemisphere.

In their book, Friedman and LeBard observe that “Japan’s need for physical security requires that it take control of its regional environment, the Northwest Pacific …. Japan’s need for raw materials demands that it adopt a much broader policy, reaching far beyond the confines of the northwestern Pacific” (op. cit.).

This is the conundrum that led Japan to become an imperial power once it had industrialized pre-World War i.

Up to now, these authors comment, “the heart of Japan’s defense policy has been to allow the United States to take care of it.” They then observe that “Japan knows full well, counting on America’s good nature is precarious ….”

This is particularly the case with the current U.S. administration.

Given that, in the light of its foreign-policy imperatives mentioned above and the “precarious” nature of continuing to rely on the U.S. as its protector, Friedman and Lebard observe that “Japan must return to history and live the place assigned to it on Earth, living by its own wits and its own powers ….”

That is exactly what your Bible prophesies will happen to Japan.

The grand clash of powers that will consummate the present state of global disorder is prophesied to be between a European empire—in reality the seventh and final resurrection of the old Holy Roman Empire—and an alliance of three dominant Eastern powers (Revelation 16:12).

The Prophet Ezekiel (Ezekiel 38) identifies these powers as China (Gog) and Russia (Meshech and Tubal) in alliance, joined by Japan (the house of Togarmah of the north quarters) and its imperial possessions (Gomer and all his bands—Southeast Asia).

Together they are able to muster a military force 200 million strong (Revelation 9:16).

Should Japan become a nuclear-armed power, then one can only wonder at the extent of devastation that three nuclear powers in a defensive alliance could unleash on the world.

How does that three-player game end, and how does this all affect the United States, Britain, its dominions and the rest of the world?

Your Bible fills in the details. Our booklets Russia and China in Prophecy and Nahum—An End-Time Prophecy for Germany are great study guides which will aid you in understanding the outcome of these powerful end-time prophecies.

Suffice it to say that this Far East alliance meets its nemesis on the great plain of Megiddo (Revelation 16:16), overwhelmed by a far, far superior force. This is the final great battle that ushers in the peaceful rule of Jesus Christ and the saints for a whole millennium on Earth (Revelation 20:4).

And it doesn’t stop there.

At the end of that millennium we see the Eastern hordes on the rise again, militarily, only to—once again yet with finality—be defeated by the same mighty force that dispensed with them 1,000 years earlier (Revelation 20:7-9).

Then comes the greatest chapter of all in the history of man, when every man, woman and child who lived and died previous to the onset of the millennial rule of Jesus Christ and the saints are resurrected to learn how to live and truly fulfill their incredible, God-ordained, human potential!

The true, biblically revealed history from Eden to Armageddon is a stupendous story, gigantic in its true proportions. Yet its capstone will be that all that has gone before will be but a forerunner to the greatest era yet to come in the unfolding history of the family of man!