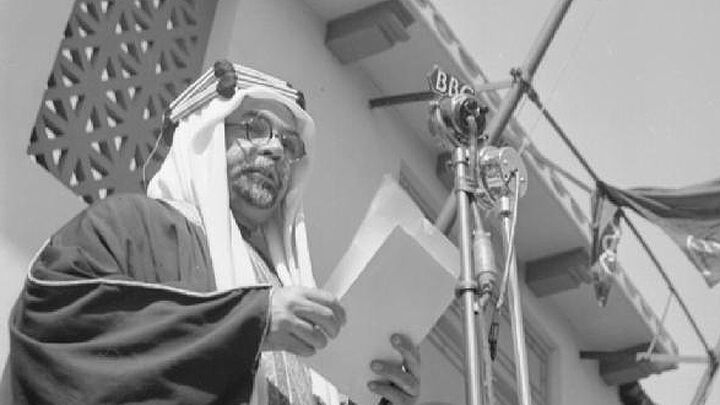 During the San Francisco Conference of 1945, Herbert W. Armstrong, as founder and editor in chief of the Plain Truth magazine and presenter of the World Tomorrow radio program, was approved within 48 hours to interview the famed Arabian diplomat Sheikh Hafiz Wahba at the Fairmont Hotel. Dressed in a suit rather than his traditional robes, the sheikh, the man in charge of Palestine relations for the Saudi Arabian government, was accompanying Prince Faisal, later to become King Faisal, and spoke in English throughout the meeting.

As Mideast tension flared again during 1979, the Plain Truth’s founder recounted that electrifying 1945 interview to his millions of magazine readers in that year’s February edition:

“Why do the Arabs oppose the Jews in returning to Palestine?” I asked.”We do not oppose the presence of Jews in Palestine,” he corrected me. “We only oppose further and unlimited immigration of Jews into Palestine.””But the Jews claim Palestine as their Holy Land,” I said. “They believe Almighty God promised that land to Abraham, and that they are the children of Abraham, and therefore that Palestine belongs to them by divine right. Now I understand the Arabs are also the children of Abraham, descended through Ishmael. Do you believe that, and claim the right to possess Palestine on those grounds?””We are the children of Abram,” he replied, pronouncing it “Uhbrahm,” with the accent on the last syllable, “and we are descended through Ishmael, yes, and Ishmael was the firstborn son of Abram and therefore the rightful birthright holder and heir to the land promised Abram. But, and he emphasized the point, “we do not present our claim to Palestine, or oppose further and unlimited Jewish immigration, on those grounds.”Then he explained the Arab position—and he gave me an unanswerable argument—yet the Zionist director in New York later gave me a sizzling answer to the unanswerable argument! “Let me put it this way,” the sheikh continued. “How long have you Americans been here in California—when did your first white men come here?””Only some three or four hundred years ago,” I replied.”Exactly! And you have only been established as a government here a much shorter time than that. Now you are still at war against Japan. [This was in the spring of 1945.] A considerable number of Japanese had immigrated into California before the war and established homes here. You did not object or fight against this limited Japanese immigration and residence here, just as we did not, for a long time, against the Jews’ immigration into Palestine. But now suppose the Japanese wanted to increase their immigration into California until there would be more Japanese than Americans here, and then they also demanded that you let them take over the State of California and set up a new Japanese nation here on your soil. Tell me, would you oppose that? Would you call out your armed forces to fight against it?””There was only one answer to that! Of course the United States would fight to prevent it, with all the power and resources of the nation, if need be!””Would you think you were right in doing so?” he asked.We would!”Well,” he explained, “the Arabs have lived in, and had possession of Palestine, for thousands of years. Our homes are there. We didn’t object to a few Jews coming into our land. We know they have brought us many benefits. They have brought with them money, energy, industry. Our people have benefited by the additional prosperity and other advantages they have brought us. That we welcomed, as long as they were a beneficial minority in our midst. But now Jewish immigration has been increasing at such a rate that soon there will be more Jews than Arabs. Now the Jews want to take our land away from us and make it their own nation! That land has belonged to us many times longer than California has belonged to Americans. You say you would oppose and fight against Japanese immigration flooding California with more Japanese than Americans, taking your fair state away from you and turning it into a new Japanese nation. Well, that is exactly why we oppose further Jewish immigration and will fight to the last man against the Jews setting up a nation on our land!”There is his “unanswerable argument”!Can you answer it? Of course, in due time, when God Himself steps in to take rule away from men and to rule the Earth by divine fiat through Christ as King of kings, it will be different. But, from the standpoint of the present time and the present world, I had no answer! “But,” I questioned “His Excellency” further, “what about the pitiful condition of hundreds of thousands of persecuted homeless Jews driven out of Europe by Hitler? Can you deny these poor refugees a home in what they consider as their own ancient homeland?””Why should the Arabs be called upon to bear all the burden of sheltering homeless Jews?” he asked in reply. “Why do America and Britain expect us to accept them when you yourselves refuse them? You could absorb them and they would only be a small and unnoticed addition to your famous ‘melting pot.’ But every other nation on Earth turns these homeless Jews away from its borders and then expects the Arabs to take them all into Palestine, where they would then outnumber Arabs and take our country away from us! Is that right? Is that international justice?”

Two years later, in February, while in London, Mr. and Mrs. Armstrong attended a royal reception in honor of the Crown Prince Emir Saud, the eldest son of King Ibn Saud. Following their formal presentation to the king, they spoke once more with the sheikh about Mideast peace.

“If only Great Britain, America, and all the other nations would quit interfering and stirring up all this emotional feeling in favor of more and more Jews going to Palestine until they drive our people out, we would have no troubles at all in Palestine. The fires of trouble are being fanned by the interference of other nations and their sentimental and unthinking emotion about Jews becoming a nation in Palestine. Stop all this propaganda and interference by so many nations not directly concerned, and the Arabs and the Jews will get along all right together in Palestine.”And there, again, he put his finger directly on the source of the trouble: so many nations not personally concerned burdening themselves with Palestine!

“Do you know the prophesied fate of these nations who interfere in a quarrel not their own?” the Plain Truth editor in chief asked his February 1979 readers.

He implored them to listen to the Prophet Zechariah, who wrote in chapter 12, verses 1-3: “The burden of the word of the [Eternal] for Israel, saith the [Eternal] …. Behold, I will make Jerusalem a cup of trembling unto all the people round about, when they shall be in the siege both against Judah [the Jews] and against Jerusalem. And in that day will I make Jerusalem a burdensome stone for all people [all nations]: all that burden themselves with it shall be cut in pieces, though all the people of the earth be gathered together against it.”

It is truly illuminating to recount these historic interviews in light of the Mideast events that have unfolded in the ensuing years regarding the State of Israel and the Arabs, which we have repeatedly reported to Trumpet readers through the clear light of Bible prophecy.

Concluding his recount of these electrifying interviews, Mr. Armstrong made biblically clear to readers that Palestine belonged, by heavenly grant, to the ancient patriarch Abraham and his descendants. He made clear that God Himself had rejected the father of the Arabs, Ishmael, from this birthright promise and that it had passed to Isaac. That the same true God rejected Esau, eldest son of Isaac. He answered the unanswerable argument from God’s Word through the stunning sure word of prophecy declaring the land of Palestine was the possession of the descendants of Abraham, through Isaac and Jacob.

But, Mr. Armstrong continued, “Most people today do not seem to know that the Jews are not Israel, but only a part of Judah.” He went on to explain that it is the American and British peoples who are truly the national Israel today.

Trumpet editor in chief Gerald Flurry has repeatedly identified the Mideast peace process, citing the Prophet Hosea, as a deadly “wound.” In addition, he led the charge to preserve the very book offered by Mr. Armstrong to those millions of February 1979 Plain Truth readers. Through an out-of-court victory at the end of a six-year court battle, fought against those who sought to abolish its illuminating message of truth, we are able to offer to you, for free, a copy of The United States and Britain in Prophecy.