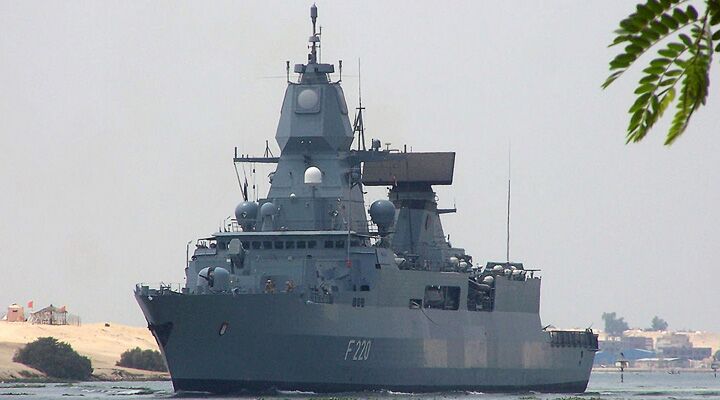 To protect its access to vital seaways, Germany is about to embark on a drastic upgrade of its navy.

Following a rash of reports and high-level meetings over the past few months, German elites are seeking to greatly increase their nation’s naval presence in foreign waters.

The latest high-level think tank to join the clamor for raising Germany’s global military presence is the Konrad Adenauer Foundation. Funded by the federal government, this foundation has political allegiance to the Christian Democratic Union, Germany’s main center-right political party.

According to a release by German-Foreign-Policy.com, a current paper produced by the foundation declares its support of moves for strengthening of “military capacities” in the Deutsche Marine.

The case is made that the Federal Republic is strongly dependent economically on the sea, not only due to the maritime economy in an immediate sense which totals 3 percent of Germany’s gross domestic product, but also as much of the nation’s major industrial exports are transported overseas by ship.

With the German economy essentially built on exports, access to the seaways by which its products travel to their foreign destinations—and through the vital sea gates that are the main choke points in sea trade—is vital to the survival of the German economy.

In tandem with statements made by Commerzbank Board Chairman Klaus-Peter Müller at the recent baks forum, the Konrad Adenauer Foundation report observes that with rising world trade growth, the “risks along the global maritime added-value chain” are rising; new “weak spots” are appearing in the “maritime transport chain,” such as off the coast of West Africa, where Germany will also soon have to show its military presence as it is currently doing off the Horn of Africa.

The report describes the inevitability of the government ensuring that the Deutsche Marine be appropriately equipped to handle such missions.

Anticipating adding to these commitments even more overseas missions, new warships including submarines and frigates are on order and will soon be added to the Deutsche Marine’s flotilla, strengthening its global presence.

The online journal Germany Defense states that the German Navy is today “Equipped with state-of-the art naval vessels, weapons and aircraft,” and as such, “the German Navy is a force to reckon with. [T]he force is planning on a lot of acquisitions in order to strengthen its fleet further.”

The Deutsche Marine’s first mission was, significantly—given its primary role in the destabilization and breakup of old Yugoslavia—as part of a multination force operating 1993 to 1996, tasked with blockading shipping from serving former Yugoslavia via the Adriatic Sea.

Two years later, the German Navy engaged in its first combat mission since World War ii. A small German marine task force joined a multination European Union force in a mission dubbed Operation Atalanta at an operations base in Djibouti. The mission was mounted to counter the attacks of pirates on shipping in the region of the Horn of Africa. Spiegel dubbed it “Germany’s return to the world’s military stage.”

It was, at the time, as Spiegel put it, “a rather modest undertaking.”

In keeping with Germany’s defense elites’ current drive to build a positive image of the nation’s military role in the mind of the German public, the Deutsche Marine seeks to enhance its public image by emphasizing its role as protector of German citizenry. The Deutsche Marine has launched its “Sea. For You.” PR campaign.

Its web page declares (translation ours),

Our prosperity depends largely on the trade across the oceans. … Trade across the oceans requires secure sea lanes. … A powerful navy protects these straits.Political, ethnic and religious and economic conflicts, in association with piracy and the global reach of international terrorism, are a key threat. This threat has a direct effect on the free sea links and the free exchange of goods. Effective preventive security is ensured by an active German Navy in close national and international cooperation.The German Navy, with its diverse and powerful range of capabilities, directly contributes to protecting the security and prosperity of every citizen.The importance of a powerful navy for the security and prosperity of Germany, and thus to clarify each individual target, is the image campaign of the Navy.

We would do well to point out that the recent meeting of Germany’s Cellar Trialog Group, the June forum of Berlin’s Federal College for Security Studies (baks) and now the report from the Konrad Adenauer Foundation—all of which we have reported on—have one thing in common—an urging of political action to strengthen Germany’s global military reach and a stronger linkage between industry and the military.

It is no coincidence that this new push for enhanced German military power comes hard on the heels of the release in May of the report from the European Union Institute for Security Studies (iss). That report contained strongly worded recommendations for the European Union to become a united global military power of significance in the wake of America’s continuing drawdown of its global defense presence.

That report urged the extension of the EU armed forces “into the EU’s geographic zones of privileged interest,” putting “greater emphasis on maintaining and enhancing their naval and aerospace capabilities” (emphasis added throughout). In particular, that report recommended “naval patrols to enhance regional confidence, protect trade routes or prevent piracy” in addition to “command of the sea to dissuade foreign aggression during periods of tension.”

Germany’s defense elite have wasted little time since the publishing of the iss report in ramping up the debate on a new push for German industry to tool up for larger orders from Germany’s Department of Defense. The pressure is now mounting on politicians in a crucial election year to meet this challenge with appropriate budgetary increases for defense.

It is highly doubtful that either Chancellor Angela Merkel or her minister of defense, Thomas de Maizier, are cut out to follow through on this heightened push by German defense elites to rapidly and urgently grow Germany’s military power.

With the Middle East endemically unstable, North Africa in turmoil, Germany’s export economy placed at risk by any disruption to traffic in vital seaways and through crucial sea gates, it may well be that defense becomes a hot potato in the debates running up to Germany’s September federal election. The coming European Council summit conference on defense, slated for the following month, may add extra pressure to this scenario. The summit meetings, scheduled for October 24 and December 21, are due to consider three vital areas in EU defense: the political case for defense, the operational case (its ability to act), and the economic case.

These summit meetings are both timely and crucial given the leaderless confusion that is currently extant globally. As the iss report observed, “Increasing defense and military cooperation at the European level may no longer be a matter of choice but of necessity, imposed by both external challenges and internal constraints. … [D]oing all this is urgent …. [T]he outside world may push Europeans into taking those decisions sooner rather than later ….”

Watch September to see whether the outcome of the election for the chancellorship will result in the appointment of political leadership in Germany that will grasp the nettle and hasten the implementation of these crucial EU defense decisions.

Watch for the outcome of the vital European Council summit on defense in October and December to see if indeed the EU, under the influence of its dominant power, Germany, will react to any perception of the “outside world” that “may push Europeans into taking those decisions sooner rather than later.”

Read our booklet Germany’s Conquest of the Balkans for more timely information on the power behind the rise of German militarism.