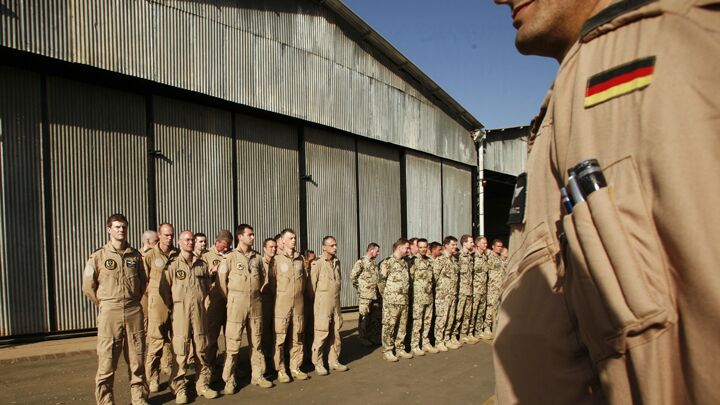 From the Gulf to Nigeria, Germany is taking an increasingly aggressive stance protecting its raw materials access. But where is it leading?

One of the main points of discussion at last week’s high-level forum on defense and security in Berlin centered on raising the military protection of Germany’s raw materials sources.

Broadcast live via the government-financed media outlet Deutsche Welle, the forum—hosted by Berlin’s Federal College for Security Studies (baks)—had, as a top item on its agenda, ways and means of adding to the Bundeswehr’s existing presence in Africa within countries that are vital to the continuing supply of raw materials for Germany’s export-led economy.

One of the foremost speakers at the forum was Commerzbank Board Chairman Klaus-Peter Müller. He demonstrates in his background the close affinity that German commerce has with its military elites. Müller is a highly decorated reservist officer in the Bundeswehr in addition to holding the chair at Commerzbank.

Prior to the baks forum, Müller stressed a point that he was to dwell on at some length during his forum presentation. He observed that “‘more than half of the metallic raw materials produced in the world come from politically unstable countries,’ making ‘investments’ in the exploitation of these resources ‘unattractive.’ Therefore, ‘whoever takes out a terrorist training camp at the Hindu Kush,’ lowers, simultaneously, the ‘general risk premium for the economic and financial markets’” (German-Foreign-Policy.com, June 24).

Read between the lines with a knowledge of German elites’ imperialist plans for expansion “south and east” (Daniel 8:9), and this observation becomes tantamount to endorsing the eradication by military force of any threat to the continuing supply of raw materials to Germany’s industrial furnaces posed by instability in the region of supply.

Some weeks in advance of the high-powered baks forum of last week, a group known as the Cellar Trialog—founded in 2007 by Müller and Maj. Gen. Wolf Langheld, former commander of the 1stArmored Division in Hanover—met to seek ways of further integrating the interests of German business with the military. “At that session Armin Papperger, board chairman of the arms producer Rheinmetall, made a plea for an intensification of cooperation between the armed forces and the business sector” (ibid).

During this Cellar Trialog 2013 meeting held in May, Germany’s minister of defense, Thomas de Maizière, “explicitly called for a ‘circulation of talent’ between enterprises and the military,” stating that “Germany’s ‘future’ depends upon it” (ibid).

We ought to recall the unfortunate results of the last time that German industrialists were encouraged to channel their business efforts in support of the German military machine.

In terms that would have been unspeakable only a decade ago, part of the baks forum agenda focused on “discussion on the military policy implications resulting from the fact that internationally Germany is considered the ‘leading European power’” (ibid).

The two-day baks forum was followed by a panel discussion embracing topics that would have been taboo to any publicly broadcast meeting of such high-powered personnel a few years ago. Featured in the panel discussion were considerations of the Bundeswehr’s role in overseas special forces missions, the hot topic of drone warfare and the military’s role in specifically targeted killings.

There can be no doubt that by airing the baks forum live over DW radio and tv, the German government had in mind further influencing the German public in support of the growing military role of their nation. The timing gels with the previous week’s release of a national postage stamp lauding the foreign missions of the Bundeswehr.

Concurrent with these events came the reports of Germany’s intervention in Libya and planned strengthening of a Bundswehr presence at the Gulf of Guinea. While the former action strengthens Germany’s toehold on a vital source of oil supply, the latter takes its planned North African military presence westwards, clear across to the South Atlantic coast of that continent. From there, it’s a straight shot, via the South Equatorial Current, to Brazil—interesting, when one considers the effort of EU imperialists to sew up control of the flow of resources from both Africa and Latin America to the European continent.

Ever on the ball with its brilliant intelligence on Germany’s imperialist expansion, German-Foreign-Policy.com reported last week that “German Marine circles debate on another Bundeswehr mission to fight against pirates. The scene shall be the West African Gulf of Guinea, from which an increasing amount of oil and natural gas are being delivered to the EU, including Germany. In the Gulf of Guinea the Federal Republic shall participate in a ‘training mission’ with military personnel, but also with war ships” (June 26).

In a report the following day, German-Foreign-Policy.com stated that the deterioration of the situation in Libya is “counteracting efforts by Berlin and the EU to get the big territories of the Sahara and Sahel, together with the countries bordering the land-strip south of their boundaries, under control.”

It further reports that the EU, no doubt with urging from Berlin, now opts for strengthening Libya’s “structures of repression.” This approach will entail, “in addition to building up a border police through the EU, a new build-up of armed forces by nato …” (ibid).

That Germany is accelerating its military efforts to secure both its raw materials sources and the corridors along which those raw materials flow by land and sea to its factories, is becoming glaringly obvious.

Grab a map of Africa. Draw a line from Brazzaville in the Congo, through Kampala, Uganda, then eastwards to the Gulf coast of Somalia, north through Afghanistan to Uzbekistan, west to Algiers, and south to Mali. There you have the northern quadrant of Africa and Eurasia with the positioning of the Bundeswehr in each of those theaters vital to the provision of raw materials to German industry.

Students of history will deduce that this is always the manner in which an imperialist power operates—strengthening its military presence in proximity to its resource supply centers. The problem is that too often the entrenchment of an imperialist nation’s military forces in a foreign land leads to the repression of that nation’s population. Even a cursory reading of the prophecy of Revelation 18:3, 11-13—in particular the last phrase of verse 13—should reveal the sad outcome of Germany’s military expansion into North Africa.

The rise of German militarism, concurrent with the merger of the policies of the nation’s business sector with that of its defense establishment, and a propaganda drive to raise the public’s opinion of Germany’s globalist military role, has not augured well for the world in the past.

Neither does it on this present occasion.

In fact, as we have pointed out for decades—from the time the German nation lay in the ashes of abject defeat in 1945, through the time of its division east and west, on through the time of reunification to this very day—this time the drastic results of a remilitarized Germany will pale into relative insignificance the horrors of the past two world wars!

You need to grasp this reality.

As the baks agenda intimated, Germany is considered the “leading European power.” Believe it or not, your Bible prophesies that soon Germany will be the leading global power, dominating the seventh and final resurrection of the old Holy Roman Empire!

To grasp this fundamental reality of our times, study our riveting booklet Germany and the Holy Roman Empire.

That booklet will not only give you an accurate perspective with which to view the ongoing rush of world events, it will lead you to a beginning understanding of the far greater, more peaceful and glorious empire that lies beyond the Holy Roman Empire’s coming final death rattle.