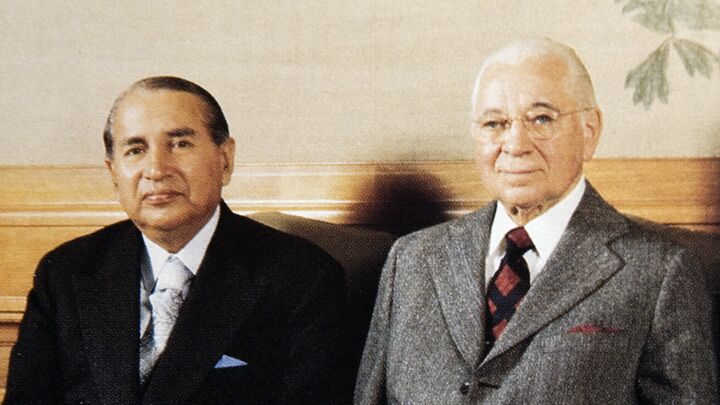 The internationally recognized ambassador for world peace developed a special friendship with a key aide to India’s president. It was through this contact that testimonial dinners, personal appearances and special invitations were arranged for Herbert W. Armstrong to visit India’s elite, including its prime ministers and presidents, such as Indira Gandhi and V.V. Giri.

Mr. Armstrong recalled one such event hosted in his honor at the Oberi-Sheraton. “Last night, here in Bombay, India, halfway around the world from Pasadena, we had the biggest and most successful ‘testimonial dinner’ since this new phase of God’s work began. More than 400 distinguished leaders and wives attended. This large dinner was hosted by Judge Nagendra Singh of New Delhi, judge of the World Court of International Justice at The Hague, Holland. Present were 15 justices of the High Court of Bombay, presidents of universities, chairmen or presidents of several of the largest industrial and commercial organizations, the deputy British high commissioner, several civil service officials of India’s government for the Bombay area, and others of like status” (co-worker letter, Jan. 23, 1975).

Contrasting the great technological advances made in the 20th century with the massive risk that nuclear power had introduced mid-century, Mr. Armstrong continued: “I spoke on the astonishing accomplishments humans have made on Earth in this century—breathtaking inventions like the incredible computer, the marvels of space flight, to the moon and back—yet, at the same time producing weapons of mass destruction to kill millions of people with one H-bomb. I asked if that made sense to them, and there were a number of expressions of ‘No! No!’

“I went into the incident of the ‘forbidden fruit’ in Genesis 2 and 3: Of how the Creator began instructing the first two humans on the way of life that would lead to happiness, abundance and eternal life—the way that would have prevented all of these evils that beset us in the world today; of how that way of life is an inexorable law, as relentless and sure as the law of gravity—a spiritual law. I then explained that there are just two broad, general ways of life, and they travel in opposite directions. Of how I call one, simply, the way of ‘give’—and the other way of ‘get.’ The give way is the way of outgoing concern toward others—the way of God’s law—the way of love.”

He later mused over the fruits of the powerful message that he delivered as a lone voice—a witness for the true gospel message—to India. “I’m sure, however, it was the ‘strongest medicine’ ever to enter their ears! And I felt that, even if we could go no further in India, that country had had God’s last message delivered to those responsible for the minds and attitude of the 550 million people. I told them bluntly, by authority of the Creator God, creator of the people of India, that they were responsible for what they had just heard!” (ibid, Nov. 26, 1973). Two years later, Mr. Armstrong would be invited to speak at a Lion’s Club convention in Bombay to an audience of over 4,000 delegates. Furthermore, the combination of a targeted advertising and broadcast presence drew over 20,000 responses to the preaching of Christ’s gospel as a global witness (Matthew 24:14).

Today, Herbert Armstrong, Nagendra Singh, the World Tomorrow program and the Plain Truth magazine are gone. However, the message Mr. Armstrong declared to all India and that which those people heard and read is “prophesied again” as a warning to this world that what he prophesied is now actually coming to pass. Gerald Flurry, via the Key of David program and the Trumpet magazine, has taken up the baton to continue that work (Revelation 10:11). Those most seriously-minded Indians who remember Mr. Armstrong and the message he delivered, and recognize its Source, are loyally backing this message once again.

Blessed are the ears that were opened to hear that message of Herbert Armstrong (Revelation 3:22). If you were one of those who heard the gospel message of Jesus Christ proclaimed by an unofficial ambassador for world peace, do you remember?