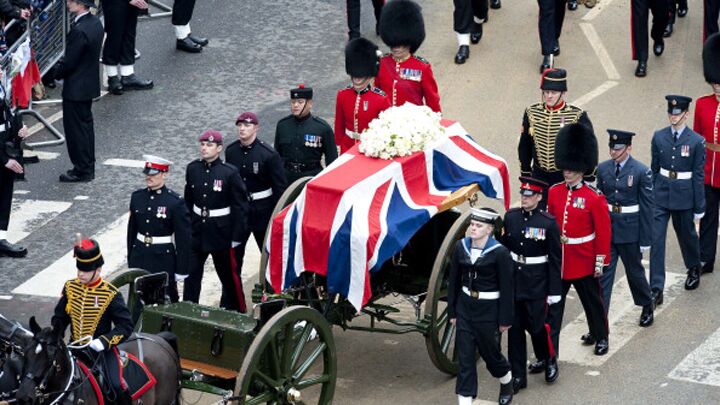 President Barack Obama did not send any officials from his administration to attend the funeral of former British Prime Minister Margaret Thatcher in April. Instead, in attendance were the U.S. secretaries of state of the Reagan and George H.W. Bush administrations—the top U.S. diplomats during Thatcher’s premiership. Such a “distinctly low-key official representation to Lady Thatcher’s funeral,” as the Guardian described it, was far less than what tradition would have called for. Heads of state and/or high-ranking government officials typically attend funerals of other heads of state, particularly if their countries are allied. The Obama administration’s snub is another example of America distancing itself from its historical “special relationship” with Britain.

On March 21, Chicago officials announced a plan to close 54 schools by August, amounting to 10 percent of all elementary school facilities. This is the largest single closure of school buildings in U.S. history. America’s third-largest city, Chicago serves as a barometer for many of the nation’s sprawling cities. Budget problems are weighing on school districts nationwide. Taxpayers are feeling the effects of excessive teacher pay packages agreed to by corrupt politicians and extorted by greedy unions. America’s education system is in shambles and needs an overhaul.

Texas water is drying up

The levels of groundwater in Texas’s aquifers dropped sharply between 2010 and 2011, according to a report by the Texas Water Development Board. The report, published in February, shows a sharp decline in groundwater levels in the state’s nine major aquifers. Texas has experienced the worst drought in the continental U.S. Nearly 99 percent of the state is “abnormally dry” or worse; almost 13 percent is in “exceptional” drought conditions. Water levels in the Ogallala Aquifer in the Panhandle region receded in 25 of its 26 observation wells, with an average drop of 3.5 feet. The Ogallala, which spans eight states, is Texas’s major source of underground water. The situation in Texas, and much of the U.S., is a result of the rapid removal of the prophesied blessings that were once showered on this great nation.

Senior executives at the Associated Press have said that the U.S. Justice Department secretly obtained two months of telephone records of AP reporters and editors. AP attorneys say the department seized records from about a year ago for more than 20 telephone lines used by the news organization. The doj was interested in outgoing calls from the work and personal telephones of individual reporters, as well as calls from AP offices in New York, Washington and Hartford. It is unknown which journalists used the office phone lines, but more than 100 journalists work in the targeted offices. In a letter of protest to Attorney General Eric Holder, AP president and chief executive officer Gary Pruitt said the government sought and obtained information far beyond anything that could be justified by any specific investigation. The Obama administration has aggressively investigated disclosures of classified information to the media and has brought six cases against people suspected of providing classified information, more than under all previous presidents combined. This smacks of the federal government seeking to restrict and intimidate the free press. As editor in chief Gerald Flurry points out in his new booklet America Under Attack (available for free upon request), we are seeing a trend toward lawlessness on the very highest level of American society.

Secretary of State John Kerry met with top Chinese officials in Beijing on April 13 to discuss growing threats from North Korea. At the security meeting, Kerry also spent considerable time discussing the possibility of China investing in U.S. infrastructure. A lack of domestic funding has led the U.S. to look elsewhere for financing to pay for basic upkeep of the nation. “We welcome Chinese investment in the United States,” Secretary Kerry said, suggesting that China could play a big role building U.S. transportation infrastructure, water utilities and power plants. The American Society of Civil Engineers recently gave the nation’s infrastructure a D on a ranking of A through F. It estimated that it would cost $2.2 trillion over the next five years to bring it back into good repair. Chinese investment may provide some benefits domestically, but at a terrible cost. The U.S. is living Proverbs 22:7, becoming enslaved to those it reaches out to for help.